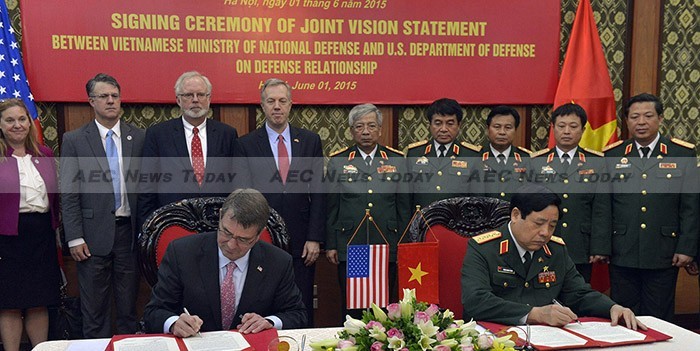 Twenty years after the post–war normalisation of Vietnam–US ties, the two nations are increasingly close. This process has sped up with China’s moves in the South China Sea since 2014, although a number of issues still hold the relationship back: Vietnam wants the embargo on weapons sales gone and the United States wants to see an improvement in human rights.

The problems that previously have stood in the way of closer bilaterals ties have largely been for Vietnam, the legacies of war. These legacies and their effects upon the post–war generation are most often seen through the lens of what the Americans left behind, including unexploded ordnance and Agent Orange.

The US–Vietnam Joint Vision Statement, released as Communist Party of Vietnam (CPV) General Secretary Nguyen Phu Trong visited the White House to meet with President Obama, states: ‘The achievements in United States–Vietnam relations are possible thanks to constructive joint efforts to rise above the past, overcome differences, and promote shared interests looking toward the future’.

And yet rarely is the war legacy understood in terms of religious persecution. But the central highlands hill tribes who converted to Protestantism and assisted American forces remain some of the poorest, most isolated  in Vietnam today.

The persecution of the ‘Montagnards’ – a catch–all term used by the French for hill tribe minority groups – has been in the news this year as groups of Gia Rai (a central Vietnam indigenous group) have been sneaking into Cambodia’s Ratanakiri province and claiming refugee status due to religious persecution. Phnom Penh has rebuffed them, leaving human rights and refugee groups outraged.

Meanwhile, Hanoi is easing back on repression as ties with the United States once again grow and the Trans–Pacific Partnership (TPP) is finally being fast–tracked in the US Congress.

Religious persecution in Vietnam is important to the United States. Yet the persecution of Protestant hill tribes receives less attention than the locking up of politically engaged and educated bloggers, some of whom are religious.

In many cases US missionaries converted these people and many later fought for US forces in central Vietnam. Like other Vietnamese, they are suffering even generations on. But this is not the first order of business when the issue of greater Vietnam–US ties versus less oppression comes up.

Though the term ‘Montagnard’ is generally used by western news, it is more often reserved for those in the northern mountains near the Chinese border, while ‘Degar’ is more traditionally applied for those in the remote central areas bordering Laos and Cambodia.

The Cham, a now mostly Muslim group who once had an empire that stretched through central and south Vietnam, fall into neither category. The same is true of the Hoa, ethnic Chinese with a long history in Vietnam who have also suffered at varied times post–1975.

But both the Dao and the Hmong, who migrated from China from the middle of the 19th century, as well as the Gia Rai, a central–dwelling indigenous group, come under the same state–mandated appellations despite their varied backgrounds and greatly differing cultures.

The US government has done much good work, helped along by a vocal and well–organised diaspora, on religious oppression in Vietnam. Wikileaks has revealed details of US investigations into religious tolerance at a local level across northern Vietnam.

The conclusion of these investigations was that freedom or lack of it at this level was partly a product of distant directives from Hanoi, but centred more upon the goodwill of local officials; some hindered Christian ceremonies whilst one man used to attend them as a sign of good will.

But the problems for those in the highlands go back to the 1950s, when the communists began land confiscation and relocation of ethnic minorities, along with targeting Christian groups.

The groups formed the United Front for the Liberation of Oppressed Races (FULRO) in 1958. With a common religious background, they later helped the United States in the deep jungles. Many groups were Protestant, Tin Lanh or Catholic. Many other groups also assisted Vietnamese forces.

While many of the ethnic minority people – some 40,000 of whom fought for the United States – may have left Vietnam post–1975, there has been little concerted help for them since. Compare this with Laos PDR, where Hmong are also persecuted.

General Vang Pao, the Hmong warlord who assisted in America’s ‘secret war’ in Laos and Cambodia, gained US citizenship and was commemorated at Arlington on his death a few years ago. There is a small but concerted group in the US campaigning for Hmong rights in Laos, but the same issue rarely comes up in any public or meaningful way in US–Vietnam dialogues.

Today many of these minority peoples remain poor, isolated, and often have their lands confiscated. Travel to parts of Vietnam’s central highlands is still forbidden, making it hard to even verify human rights abuses.

As much as Catholics in northern central Nghe An province still suffer setbacks generations on – for instance, a poor family record may prevent a person from obtaining better work or education – so too do groups who have had passing alliances with either FULRO or the United States. The United States knows this, but a lack of accessibility means verification is harder and bloggers are in some ways easier to argue for.

The anniversary of normalised ties and General Secretary Nguyen Phu Trong’s visit to the US may once again bring up human rights and the legacies of war but it is unlikely that the minority groups affected by this particular, sad intersection of the two will see much progress.

Helen Clark is a Masters student in International Relations at Deakin University, Melbourne. She spent six years as a foreign correspondent in Vietnam. This article first appeared on East Asia Forum under a Creative Commons license and is reproduced here with its permission.

The Race to a Risky Trans-Pacific Partnership Deal