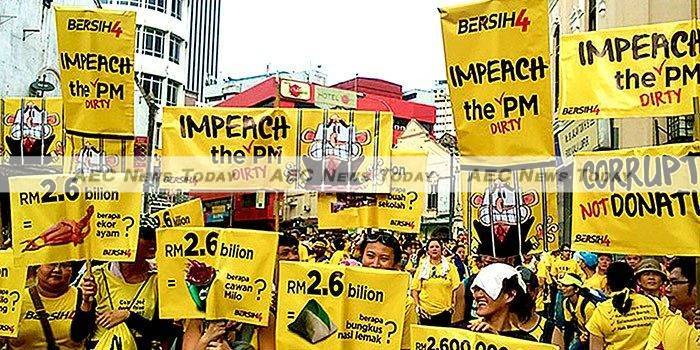 As it tussles with multiple crises of political legitimacy and governance Malaysia has reached a decisive point in its more than half-century history as an independent nation. What started as a shocking but not exceptional scandal has turned into a political crisis of unprecedented proportions. This was underlined by the Bersih 4 protests on August 29–30  in Kuala Lumpur, attended by an estimated 250,000 yellow-T-shirted Malaysians

First, it was discovered that development agency 1 Malaysia Development Berhad (1MDB), set up by Prime Minister Najib Tun Razak in 2009, was in debt to the tune of RM42 billion (US$9.6 billion). Where, it was asked, did this vast sum of money go? What mismanagement or corrupt practices led to such a meltdown?

Then it was reported that the sum of RM2.6 billion (US$598 million) had shown up in Najib’s personal bank account. It has been admitted— in installments —that this money was indeed placed in that account, but it is claimed to have been ‘donated’ from Middle Eastern sources as recognition of Malaysia’s role in fighting the Islamic State (IS) and maintaining Sunni Islam. Given the timing (just before the 2013 Malaysia general election) and Najib’s claim that the funds were used for party political purposes, the money was clearly intended and used to ensure victory for the ruling Barisan Nasional (BN) coalition, led by Najib’s United Malays National Organisation (UMNO) party.

Najib claims that nothing about this was illegal, given the current lack of statutory control over campaign spending, maintaining that he held the funds in trust for his party. But since BN won the election with a clear minority of votes, yet a majority of the seats in parliament, the legitimacy of the result was already in serious question even before the donation scandal came to light.

It gets worse. Najib’s response to attempts to get to the bottom of these matters has raised further questions about accountability and governance in Malaysia under BN rule. At first he was reluctant to give any explanation. Ultimately, denials followed by evasive answers raised many further questions.

The Public Accounts Committee (PAC) in the Malaysia parliament set about an investigation. The BN government itself set up a ‘task force’ to find out what happened. The task force included the attorney-general’s office, the central bank, the Malaysian Anti-Corruption Commission (MACC; Malay: Suruhanjaya Pencegahan Rasuah Malaysia, SPRM) and the police.

Both processes have been interfered with in a highly suspicious way. Four members of the PAC were abruptly transferred in a cabinet reshuffle. Two senior MACC officers were transferred to the prime minister’s office, only to be transferred out again after questions were raised. The attorney-general himself was equally abruptly replaced — ‘for health reasons’ — when a report alleged that criminal charges against Najib had been drawn up (by whom is not clear).

These events dismayed the public and rocked the government. The reshuffle involved the sacking of four ministers, including Deputy Prime Minister Muhyiddin Yassin, who had called for accountability in respect of 1MDB.

A Serious Split in UMNO

Veteran former prime minister Mahathir Mohamad began a political assault on Najib, accusing him of corruption and lack of leadership. There is evidence now of a serious split in UMNO over Najib’s leadership.

At this juncture, the official agencies designed to ensure good governance have not been allowed to do their job without political interference. Even the task force supposedly investigating the scandals has been replaced with another multi-agency force that is not empowered to investigate 1MDB.

The question now is: how can Malaysia’s constitutional system move matters towards a resolution in terms of legal and political accountability?

Najib holds the levers of power both in government and within the UMNO party. Party elections have been postponed. The prime minister owes his office, under Westminster conventions set out in Malaysia’s constitution, to his parliamentary majority and he could therefore, in principle, be subjected to a no-confidence motion. This would require sufficient dissent in UMNO and BN to get 24 of their members to vote with the opposition parties. The response of one opposition party (the Islamic party) remains uncertain, and even 24 may not be enough.

The main problem with all of these potential methods of levering Najib out of power is that there is no obvious successor. For now Mahathir undermines Najib, and Muhyiddin is a focus for UMNO dissidents. UMNO division heads apparently support Najib, but in UMNO what passes for personal allegiance is no more than adherence to a political personality for as long as he can deliver. Najib’s support is therefore potentially fragile. Meanwhile, with its former leader Anwar Ibrahim languishing in jail convicted of sodomy, the opposition too is in disarray and in the process of reconstruction.

Malaysia has thus entered uncharted waters. Despite internal crises over the years, UMNO has historically been able to deliver election wins and legitimacy in government. That record is now in doubt. The Malaysia economy is in free fall, the ringgit plunging and investors fleeing.

Bersih 4 demanded Najib step aside and hold free and fair elections. Free and fair elections cannot be held under the current Election Commission of Malaysia’s (EC; Malay: Suruhanjaya Pilihan Raya Malaysia (SPR)) supervision: constituency boundaries are gerrymandered in such a way as to make an opposition victory almost impossible. There is no indication that the electoral system will be set right before the next election, due by March 2018.

Something, sooner or later, has to give. The survival of Malaysia (not just Najib) politically and even economically is at stake. The only real hope, as one wag put it, is that when the centre cannot hold and things fall apart, they might just, somehow, land in the right place. The only safe prediction is that this sorry tale of corruption and misrule is by no means over. Perhaps, indeed, it has only just begun.

Written by Andrew Harding, professor of law and director of the Centre for Asian Legal Studies, National University of Singapore (NUS). This article first appeared on East Asia Forum under a Creative Commons license and is reproduced here with its permission.