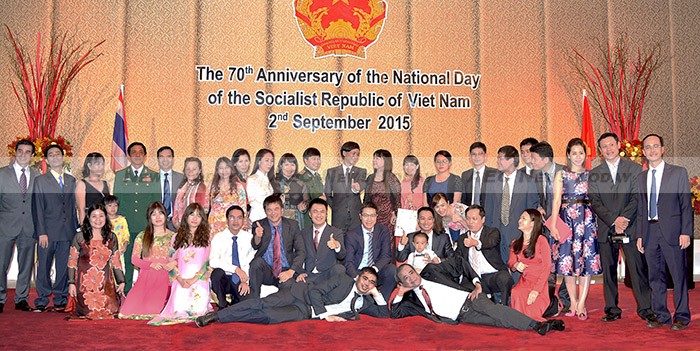 Vietnamese nationals around the world yesterday celebrated their 70th National Day anniversary commencing with an inspiring and colourful parade in the capital, Hanoi, with embassies, consulates and Vietnamese communities globally joining in the celebrations.

In Bangkok the Vietnam Ambassador to Bangkok Nguyen Tat Thành and wife Nguyen Tu Huyen hosted a lavish reception for the historic day at Plaza Athenee Hotel which several hundred members of the Vietnamese community and friends of Vietnam in Bangkok attended.

In addition to touching on some of Vietnam’s history, Ambassador Thành reflected on where Vietnam stands today – a vibrant and dynamic country with a young and capable workforce that is contributing daily to Vietnam standing out in the region as a major destination for foreign direct investment (FDI) with strong export growth.

Among the bevy of foreign diplomatic staff and Thai officials joining the celebrations was former deputy prime minister of Thailand Pichai Rattakul who over the years has helped build Thailand’s relationship with Vietnam.

With an abundance of food and drink the 2015 Vietnam National Day celebrations continued late into the night ensuring Vietnam’s 70th anniversary of the August Revolution (Cách mạng tháng Tám) by the Việt Minh against French colonial rule that led to the birth of the Democratic Republic of Vietnam on September 2, 1945 will be long remembered in Bangkok.