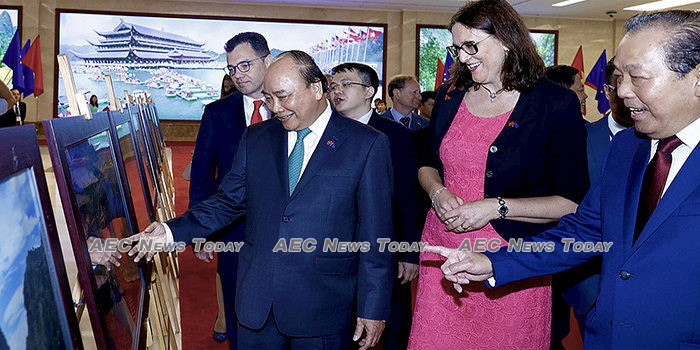 In February, the European Parliament adopted the EU–Vietnam Free Trade Agreement (EVFTA). This is the most comprehensive and ambitious EU trade agreement with a developing country to date, the result of bilateral negotiations between the two following a failed attempt to negotiate a broader EU–Asean trade agreement.

The EVFTA will be Vietnam’s next big step in international economic integration since joining the World Trade Organization (WTO). It will serve as a catalyst for institutional reforms, economic growth, and social development.

The deal will drive Vietnamese exports and help the country to diversify its international markets, with the EU removing 86 per cent of tariffs currently levied on Vietnamese goods. This is equivalent to 70 per cent of Vietnam’s revenue from its exports to the EU.

It is the biggest commitment made by a trading partner with Vietnam to reduce trade restrictions to date. Lower tariffs on EU-bound Vietnamese goods will give Vietnam an advantage over Asean competitors and China.

Vietnam’s Ministry of Planning and Investment (MPI) estimates that by 2030 the EVFTA will increase Vietnamese exports to the EU by 44 per cent. It also forecasts an increase in the country’s economic growth of 7–8 per cent in the period 2029–2033.

The EVFTA is also expected to give Vietnam access to important trade benefits, particularly full market-economy status. This recognition will allow for transparent dispute resolution and non-discriminatory treatment under the deal.

Through the EVFTA Vietnam will advance high quality and sustainable production in its economy to meet both domestic consumption and export demands.

European companies represent just 11.8 per cent of foreign direct investment (FDI)-linked projects in Vietnam and account for 15.6 per cent of all FDI. The EVFTA will allow further market penetration by EU investors, where it has lagged behind other major trading powers, such as the United States, Japan, and China.

Business confidence in the new trade deal is also strong. Vietnam’s European Chamber of Commerce (EuroCham) reported that 85 per cent of its members expect the EVFTA will have either a ‘significant’ or ‘moderate’ impact on their long-term business and investment plans.

The requirements, commitments and challenges that the EVFTA imposes on Vietnam are clear.

Negotiations were prolonged due to contentions over social issues and pressure on Vietnam to liberalise non-tariff barriers. This included concerns over rules of origin, as well as technical and sanitary regulations.

However unlike EU trade deals with African, Caribbean and Pacific countries, the EVFTA does not contain infant industry protections and requires ‘standard reciprocal bilateral safeguard measures to protect domestic producers’. Vietnam’s quarrel with the EU over anti-dumping measures raised the sensitivity of this issue.

The EVFTA also provides for broad liberalisation of government procurement. It binds Vietnam to the most ambitious government protocols yet concerning state-owned enterprises (SOEs).

Further than any previous trade agreement

These regulations go further than any previous trade agreements of which Vietnam is a signatory. It requires open public procurement for SOEs and sets up the necessary conditions to increase SOE competitiveness.

The agreement also includes rules on transparency and consultations in relation to domestic subsidies. These commitments are especially remarkable given the Vietnamese government’s perception of high ‘sovereignty costs’ associated with limiting its regulatory autonomy in these sectors.

Sustainable development is also emphasised in the deal. This includes focusing on labour standards, gender equality and environmental agreements. These rules were included despite the political, socio-economic, and cultural differences that caused negotiations for the EU–Asean free trade agreement to stall.

In the EVFTA, Hanoi agreed to ratify the remaining International Labour Organization (ILO) conventions on the rights to association and collective bargaining by 2023.

Article 14 of the deal on trade and sustainable development includes detailed procedures, strict conditions and schedules regarding civil society consultations.

The EVFTA’s institutional set up and oversight mechanisms also require that a specialised committee on trade and sustainable development meet regularly to supervise the agreement’s implementation.

This will strengthen civil society organisations (CSOs) and their role in improving the social impacts of EU–Vietnam bilateral trade. It will also raise working conditions for Vietnamese industrial workers and increase the socio-economic position of CSOs in Vietnam.

Not only will the EVFTA strengthen EU leadership in shaping global rules, it will serve as a template for EU trade negotiations with other Asean member states.

In return, Vietnam will gain access to the EU’s large market, enabling it to further long-term economic reform and growth.

For Vietnam, the deal also serves as a counterweight to China’s growing economic power and brings Vietnam closer to international economic integration. The EVFTA offers Vietnam an opportunity for economic diversification and deeper engagement with another key foreign partner, while decreasing its dependence on Chinese markets and FDI.

This article was written by Ha Hai Hoang, Associate Professor at the Hanoi National University of Education (HNUE). It first appeared on East Asia Forum under a Creative Commons License and is reproduced here with its permission.