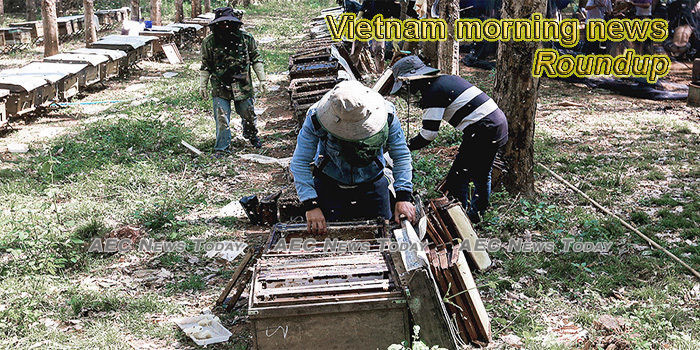 Vietnam determined to save British pilot, avoid its first COVID-19 death
Vietnam has mounted an all-out effort to save the life of its most critically ill coronavirus patient, a British pilot who works for Vietnam Airlines, the national carrier.
— Reuter

Stranded foreigners can stay in Vietnam until June 30
Foreigners entering the country under visa waiver programmes, e-visas or tourism visas after March 1 will be automatically given stay permit extension until June 30 free of charge.
— NDO

Panasonic to move appliance production from Thailand to Vietnam
Panasonic will shut down a large appliance factory outside Bangkok as early as this fall and consolidate production to a larger facility in Vietnam for greater efficiency, Nikkei has learned.
— Nikkei Asian Review (paywall)

Vietnam advised to take bold reforms to benefit from EU trade pact
Vietnam needs to fill major legal gaps and address key implementation issues in order to reap the full benefits of a trade agreement with the EU to be ratified by the country’s parliament, according to the World Bank.
— NDO

Vietnam cuts prices for local tourists as virus cases remain low
Vietnam is trying to lure tourists back to its beaches by offering price cuts. The country is one of the first Southeast Asian nations to begin to revive its economy after recording a 98 percent drop in visitors due to the coronavirus pandemic.
— Yahoo News

Vietnam to cut auto registration fee by half
The government has green-lighted a cut in registration fees for locally made cars by half in an effort to boost falling demand.
— VnExpress

Transferring solar projects to foreign investors ‘normal’: MoIT
The Ministry of Industry and Trade (MoIT) has said that transferring all or part of a solar power project was normal according to market rules and the Investment Law.
— Viet Nam News

Reopening Vietnam: How the country’s improving governance helped it weather the COVID-19 pandemic
discovered its first COVID-19 infection in early May. Now, this country of 96 million people has reported a mere 324 confirmed total cases and zero deaths.
— Brookings

Sapo Technology receives 7-digit investment
Sapo Technology JSC has completed its funding round and received an investment of up to seven-digit US dollars from South Korean Smilegate Investment and Vietnamese Teko Ventures.
— Viet Nam News

Natural disasters cause loss of $139 million in five months
Saline intrusion on some rivers in Mekong Delta has exceeded the historic 2015-2016 dry season which caused damage of VNĐ15 trillion ($646 million).
— Viet Nam Net

EVNGENCO 2 valued at $2 billion, IPO expected in December
The company’s valuation, used for its equitisation process, was announced by the Commission for the Management of State Capital at Enterprises on Tuesday.
— Viet Nam News

Vietnam yet to verify if its national caught C-19 in Kingdom
Vietnam has still not verified whether a 39-year-old Vietnamese national, who was reportedly in Cambodia before returning to Vietnam and testing positive for COVID-19 (C-19), contracted the coronavirus in the Kingdom, according to the Embassy of Vietnam in Cambodia.
— Khmer Times

Australia to impose new regulations on prawn imports
Prawn and uncooked prawn products for human consumption exported to Australia will have to follow new regulations from the Australian Department of Agriculture, Water and the Environment from July 1, according to the Việt Nam Association of Seafood Exporters and Producers.
— Viet Nam News

Ministry gives push to equitisation of SOEs
The Ministry of Finance has raised a number of measures to accelerate the equitisation of State-owned enterprises (SOEs) since the progress made no improvements recently.
— Viet Nam News

Foreign firms gobble up renewable energy plants in Vietnam
Foreign investors have acquired dozens of solar and wind power plants in Vietnam, but officials say this is a normal practice in a market economy.
— VnExpress

Uniqlo to launch new store in Vietnam’s tallest building
Japanese fashion brand Uniqlo is set to expand its presence in Vietnam next month with its third store in HCMC.
— VnExpress

Local dairy expected to continue growing in 2020: VIRAC
VIRAC forecasts that the dairy industry prospect in 2020 will continue to grow at a high level, increase investment capital in dairy farms to reduce dependence on imported milk and to meet the needs of people’s domestic consumption.
— Viet Nam News

Shares advance on vaccine trial success
Vietnamese shares advanced on Tuesday in line with world stocks thanks to optimism for a global economic recovery after a successful experiment for a coronavirus vaccine.
— Viet Nam News

Coral reefs restoration begins in Sơn Trà Peninsula
Members of the SaSa Marine animal rescue team have been restoring a 1.2sq.km complex of coral reefs on the coastal south area of the Sơn Trà Peninsula in the central city, reviving the already damaged coral reefs for prolonged existence of ocean species in the area.
— Viet Nam Net

Philippines morning news for May 2