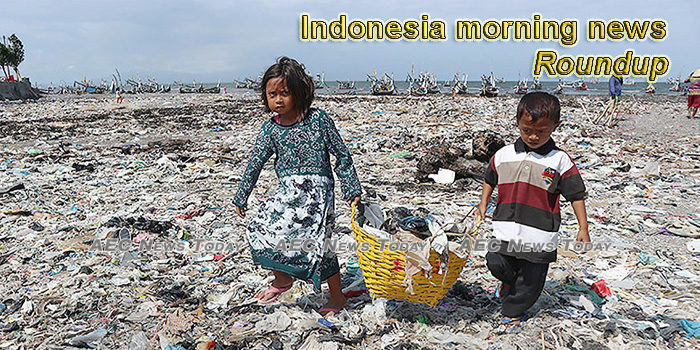 Ministry scraps PCR test rule for flyers
The Transportation Ministry has relaxed the rules for airline passengers in the new normal so they will be able to fly by submitting the results of their rapid test alone.
— Antara News

UGM among top 300 universities in the world, number 1 in Indonesia
Yogyakarta-based Gadjah Mada University (UGM) has joined the ranks of the world’s top 300 universities, moving up 66 places to land in 254th position on the 2021 Quacquarelli Symonds (QS) World University Rankings, which was released on Wednesday.
— The Jakarta Post

Ma’ruf Amin Allows Reopening of Boarding Schools in Green Zone
Vice President Ma’ruf Amin allowed boarding schools in areas categorized as green zones or are safe from the Covid-19 transmission to reopen as long as they implement the predetermined health protocols and coordinate with the Covid-19 Task Force.
— Tempo.co

Easing restrictions in Indonesia’s capital triggers concerns
As Indonesia’s overall virus caseload continues to rise, Jakarta’s governor has moved to restore normalcy by lifting some restrictions, saying that the spread of the virus in the city of 11 million has slowed down after peaking in mid-April.
— ABC News

Semarang Mayor: COVID-19 Cases Surged after Eid Celebration
Central Java’s Mayor of Semarang Hendrar Prihadi on Tuesday said that the COVID-19 cases happening in his region had surged after the Eid celebration, which comes after the fact that there was a drop in cases one week prior to Eid.
— Tempo.co

Indonesia pioneered global sustainable ocean economy amid COVID-19
Indonesia has contributed in pioneering a joint statement by global leaders on the critical role of a sustainable marine economy following the outbreak of the COVID-19 pandemic.
— Antara News

Ministry offers partial refund to registered pilgrims after cancelling haj
The Religious Affairs Ministry has announced that people who had registered for this year’s haj program may request a refund of their deposit, after the government cancelled this year’s haj on Tuesday due to concerns over COVID-19 transmission.
— The Jakarta Post

PPE production soars but quality, distribution issues remain
Quantity does not equal quality for the Indonesian textile industry, which has contributed to a production surplus of personal protective equipment (PPE) to meet demand during the COVID-19 health crisis, despite complaints from users over quality and distribution.
— The Jakarta Post

Govt hopes to boost homeownership through new Tapera program, but employers, workers concerned about fees
The government aims to boost homeownership in Indonesia through its public housing savings program (Tapera), which requires employers and workers to contribute to a mortgage loan scheme similar to universal healthcare insurance.
— The Jakarta Post

‘Dynamic’ COVID-19 Cases, Jokowi: Do Not Let Our Guard Down
President Joko “Jokowi” Widodo on Wednesday said that there must be a constant evaluation along with implementing the new normal once the protocol has been fully applied.
— Tempo.co

Ministry to commence food estate development project in 2020-2022
The Public Works and Public Housing (PUPR) Ministry has set a target to revive 165 thousand hectares of land as a food estate in Central Kalimantan in 2020 to realize national food resilience.
— Antara News

Govt pins hopes on restarting economy, despite Tuesday’s COVID-19 surge
The government is pinning its hopes on restarting the economy to kickstart recovery, despite the latest surge in new COVID-19 cases and as sales continue to drop across various industries as a result of the large-scale social restrictions (PSBB).
— The Jakarta Post

COVID-19 Task Force Reisa Broto Talks about Face Masks
The Indonesian COVID-19 task force communication team member, Reisa Broto Asmoro, on Wednesday said that the correct lifespan of using a face mask is four hours, anytime above that must be replaced with new or cleaner ones.
— Tempo.co

Indonesians remain sensitive to perceived blasphemy: YLBHI
A report conducted by the Indonesian Legal Aid Foundation (YLBHI) has revealed that accusations of blasphemy are still rampant amid the COVID-19 pandemic.
— The Jakarta Post

Families snatch dead bodies of COVID-19 patients from hospitals for burial
Despite the strict protocols in place surrounding the burial of victims and suspected victims of COVID-19 there have been a number of incidents reported recently of family and friends forcibly carrying off the bodies of dead patients from hospitals to be buried according to their own wishes.
— The Jakarta Post

Give villages greater role for more effective COVID-19 measures: Watchdog
Village administrations need to play a bigger role in containing the spread of the COVID-19 outbreak so they can carry out more effective preventive measures and provide social safety nets, a watchdog has said.
— The Jakarta Post

‘Customers will still be worried about COVID-19’: shopping center association
While the government eases restrictions and reopens the economy, the retail sector will take time to recover as consumers continue to hold fears over COVID-19, an industry association has said.
— The Jakarta Post