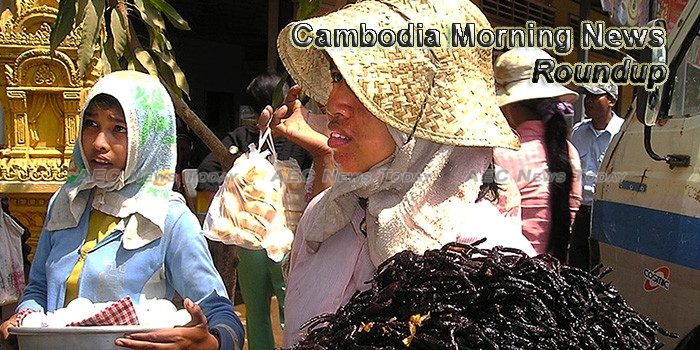 Growth to Remain Robust Despite ‘Election-Related Uncertainty’, Says IMF
Cambodia’s economy is expected to grow by 7 percent in 2017 and 2018 despite disruptions due to “election-related uncertainty”, according to the International Monetary Fund (IMF).
— VOA Cambodia

Cambodia’s Microfinance Industry: Why Bigger May Not Be Better
An issue has been swirling around Cambodia’s microfinance circles for some months. Put simply, will poor Cambodians be able to use “movable assets” – motorbikes, cars, livestock or agricultural machinery, for example – as collateral on loans?
— The Diplomat

Chinese company helps reduce poverty
AS the biggest foreign investor in Cambodia, China is an all-around partner to the South Asian country, with cooperation ranging from the high-tech telecom network construction to specific agricultural technique for modern farming.
— Shanghai Daily

Japanese to Provide Flood Aid During PM Visit
Japan will use next week’s state visit by Prime Minister Hun Sen to offer $35 million in grant aid for a flood protection program in Cambodia and improvements to Phnom Penh.
— The Cambodia Daily (paywall)

Sand facility allowed to operate
A Koh Kong environmental official yesterday said a company with a sand-washing facility in an area where the Ministry of Mines and Energy last month banned sand dredging would be allowed to keep and operate its facility.
— The Phnom Penh Post

Organic farmers soak up Thai advice
For Cambodian organic farmer Por Koung, the journey to Bangkok was more than just a chance to exhibit his products at an international expo, it was an opportunity to glean some experience from fellow organic farmers in Thailand, a country that is spearheading the region’s commercialisation of organic agriculture.
— The Phnom Penh Post

Suspect: Trafficked Weapons From Japan Disarming Program
A man accused of international arms trafficking told authorities that he had taken the weapons nearly a decade ago from areas in Cambodia where a Japanese-funded program had worked to collect tens of thousands of illegal small arms, officials said.
— The Cambodia Daily (paywall)

Japan disburses $1.2M to Khmer Rouge Tribunal
Japan has donated more than $1.2 million to the Khmer Rouge tribunal and urged the court to continue prosecuting controversial cases against Khmer Rouge leaders, after the court’s investigating judges proposed halting those proceedings for the “sole reason” of “lack of funding”.
— The Phnom Penh Post

Smart sale possible as Axiata’s earnings ebb
Malaysian telecom giant Axiata Group will likely divest stakes in its more profitable operations, including its Cambodian subsidiary Smart, as the company is projected to have a 7 percent year-on-year decline in earnings for 2017, according to PublicInvest Research.
— The Phnom Penh Post

Cambodian Women Recount Escape from Slavery as ‘Brides’ in China
Neath*, 27, sits in the shade of her family’s small wooden hut in Cambodia’s Kampong Speu district, west of Phnom Penh. With her slight build and spindly arms, most observers would never guess that she had been kept as a slave for three years and forced to carry heavy bags of cement and sand.
— New Deeply

Dispute Between Capitol, Drivers Rolls On
The long and occasionally bloody saga between Capitol Tours and its former drivers continued on Wednesday, as the two sides were summoned to the Phnom Penh Municipal Court as part of a civil case brought by the travel company.
— The Cambodia Daily (paywall)