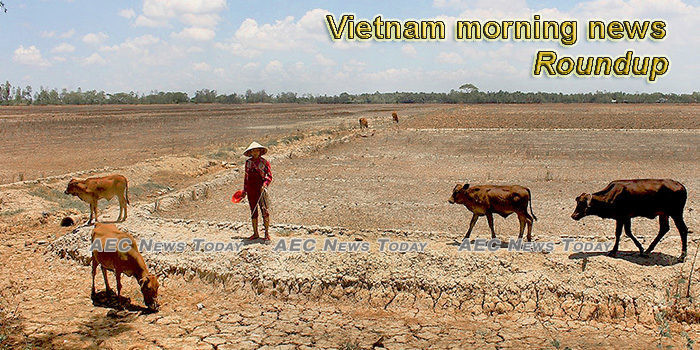 Vietnam Airlines A321 Suffers Cracked Windshield From Hail Mid Air
A Vietnam Airlines Airbus climbing out of Ho Chi Minh City last week hit torrential rain and hail, cracking both windshields. The incident caused the pilot to declare a PAN PAN and return to Ho Chi Minh City. There were no reported injuries to either passengers or crew.
— Simple Flying

Vietnam National Assembly adopted both EVFTA and EVIPA
According to EVFTA, Vietnam will eliminate tariffs on EU goods belonging to 48.5% of tariff lines in the tariff schedule right after EVFTA takes.
— Lexology

Finance ministry to consider VAT of 5 per cent on fertiliser
According to the Việt Nam Fertiliser Association, since the law came in force, the prices of fertiliser products in the domestic market rose by 7.2 – 7.6 per cent compared to when a VAT rate of 5 per cent was imposed previously.
— Viet Nam News

Cement producers urged to be flexible
Figures from the Ministry of Construction showed the country would have a cement output of more than 100 million tonnes this year while local consumption was forecast at 67 million tonnes.
— Viet Nam News

Vietnam speeds up big projects to heal economy from pandemic
Vietnam has approved its biggest commercial project this year, as the government seeks to maintain a record pace of public and private investment since January to help the economy emerge from the coronavirus pandemic.
— Nikkei Asian Review

Deputies debate tax exemption for SMEs
A policy that may grant up to 30 per cent tax exemption for small-to-medium-sized business (SMEs) was discussed today by National Assembly deputies during a meeting in Hà Nội.
— Viet Nam News

KKR Looks to Triple Vietnam Investments After Vinhomes Deal
KKR & Co. expects to at least triple its investments in Vietnam in the next decade as it seeks to capture rising demand from the Southeast Asian nation’s growing middle class.
— Yahoo News

Vietnam to encourage construction of cheap apartments
Vietnam will employ policies to encourage the development of cheap commercial houses to remove difficulties for the real estate market and enterprises due to the Covid-19 pandemic.
— The Phnom Penh Post

MoIT requests local firms to control food safety for exports to China
The Ministry of Industry and Trade (MoIT) has recommended local enterprises to strictly implement regulations on food safety for farming and seafood products exported to China to avoid them getting stuck at border gates.
— Viet Nam News

US economist says Vietnam lacks coronavirus statistics, prompts retraction demand
A tweet by a U.S. economist stating Vietnam had no data on its novel coronavirus deaths has prompted an open call for retraction, correction.
— VnExpress

Banks continue to depreciate the greenback
After four sessions of appreciating the US dollar against the Vietnamese dong, the State Bank of Việt Nam (SBV) adjusted the greenback down on Tuesday, while commercial banks followed the trend.
— Viet Nam News

Singapore eases quarantine regulations for travellers from Viet Nam
VGP – Singapore has announced that all incoming travellers entering Singapore from 23:59 on June 17 will not have to serve 14-day Stay-Home Notice (SHN) at dedicated facilities if they had remained in Viet Nam in the last 14 consecutive days prior to their entry.
— VGP RSS Feed

Lender ACB to issue bonus shares at the rate of 30 per cent
Every shareholder will receive three new shares for every 10 shares they hold, meaning ACB will have to issue nearly 499 million new shares.
— Viet Nam News

Arrests, Suspension of Vietnam Media Signal Crackdown
A wave of arrests and a one-month publishing ban on a news site over its investigations into environmental damage signal that Vietnam is suppressing criticism ahead of the country’s Party Congress, press freedom groups said.
— VOA

Vietnam’s remarkable rise deserves more attention from Canberra
Vietnam’s response to COVID-19 has highlighted its competence as a country. It has unequivocally won the peace.
— AFR

Decree drafted to empower SSC to halt market trading
If completed, the decree will give the State Securities Commission (SSC) the full authority to halt the stock market if trading goes berserk
— Viet Nam News

Cancer patients and COVID-19 in Vietnam: disruptions and reforms
On 20 March, Vietnam’s Ministry of Health confirmed that two nurses at Bach Mai Hospital in Hanoi were infected with COVID-19.
— Devpolicy

Cao Dai Church in Vietnam Resists Takeover Bid by Followers of State-Controlled Branch
Followers of Vietnam’s Cao Dai religion confronted supporters of a state-sanctioned branch of the church who came to take over their facilities on Thursday, with church members barring the door against the intruders amid heated arguments with local authorities, sources told RFA’s Vietnamese Service.
— Radio Free Asia

Dong Nai: Domestic investment up nearly 30% in five months
VGP – The southern province of Dong Nai attracted VND 15,400 billion (US$660 million) in domestic investment over the recent five months of 2020, up 29% against the same period last year.
— VGP Local Activities

COVID-19 could shake up realty rent market
According to the real estate services firm Jones Lang LaSalle (JLL)’s report, the impact of the COVID-19 has caused many tenants to carry out challenging negotiations with landlords to try and survive.
— Viet Nam News

Veg, fruit exports exceed $1.5 billion in first half
Exports of vegetable and fruits fetched more than US$1.5 billion in the first six months of the year, a year-on-year decline of 14.5 per cent, according to the Ministry of Agriculture and Rural Development.
— Viet Nam News