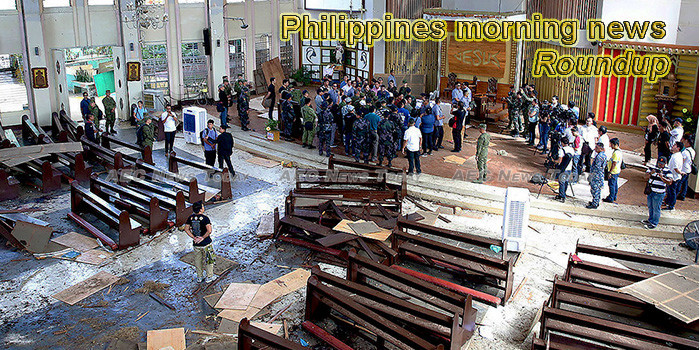 Congress buckles down on 2020 budget
THE PROPOSED national budget for next year has entered the legislative mill, with the House of Representatives lining up hearings leading to final approval at the chamber by Oct. 4.
— BusinessWorld Online

Hog raisers: Help came too late, too little
GOVERNMENT intervention in areas of Rizal province ravaged by a strange animal disease came too late and too little for them, said hog raisers who said they are now stripped bare of their livelihood.
— Business Mirror

Philippines plans to build up infrastructure spending in 2020 budget
The Philippine government on Tuesday put to Congress a proposed 2020 budget that lifts spending 12% from a year earlier and makes a push to deliver on plans to slash poverty, boost education and transform the country’s decrepit infrastructure.
— Nasdaq

BOI: Investment pledges climbed 24% in 7 months
Investment commitments approved by the Board of Investments jumped 24 percent in the first seven months to P312.8 billion from P252.2 billion in the same period last year despite the trade dispute between two of the world’s largest economies.
— Manilastandard.net

House’s alcohol tax bill ‘not enough’
THE Department of Finance (DoF) proposed higher tax increases on alcoholic beverages to the Senate on Tuesday, saying the House of Representatives’s approved hikes in alcoholic excise tax are not enough to finance the Universal Health Care (UHC) program of the government.
— Business Mirror

6 govt programs get P357B of 2020 budget
THE Duterte administration has allocated P357 billion of the 2020 national budget for its six economic and social assistance programs, the Department of Budget and Management (DBM) said on Tuesday.
— The Manila Times

‘Fat-free’ budget sent to House
THE Department of Budget and Management (DBM) on Tuesday submitted to the House of Representatives a “no fat, boneless and pure meat” P4.1-trillion National Expenditure Program (NEP) for 2020.
— Business Mirror

PEZA bucks removal of 5% tax on GIE
Removal of the 5 percent tax on gross income earned (GIE) would expose export-oriented enterprises located in the economic zones to potential corruption as these investors have to deal with various levels of the bureaucracy, particularly the local government units, the Philippine Economic Zone Authority (PEZA) warned.
— Manila Bulletin

10,000 Filipino prisoners, including convicted rapist-murderer ex-mayor Sanchez, to walk free ‘soon’
A “happy jail” law that rewards good conduct of inmates and a recent Supreme Court ruling could give up to 10,000 inmates in Philippine jails an early release, according the Philippines Justice Secretary.
— Gulf News

Navy to decide ‘unfriendly manner’ of warding off intruder vessels –Defense chief
Defense Secretary Delfin Lorenzana said he was leaving it up to the Philippine Navy to carry out President Rodrigo Duterte’s order to drive away foreign vessels intruding the Philippine waters without permission –whether in a friendly or unfriendly manner.
— GMA News

Senate panel may steer microgrid investors towards renewables
THE Senate Committee on Energy is proposing to add provisions to current microgrid legislation requiring investors in these independent energy systems to choose more renewables to supply their customers.
— BusinessWorld Online

Terms on performance, timelines limit ‘forever’ in Peza perks–Plaza
TAKE that, Salceda. The Philippine Economic Zone Authority (Peza) on Tuesday said its grant of fiscal incentives are regulated by terms and conditions that require firms to perpetually expand their operations and markets, as well as modernize their products and services.
— Business Mirror

‘More reforms needed to improve PHL irrigation’
Improving irrigation in the Philippines will entail more than just the creation of an apex body for water, a consultant of state-run think tank Philippine Institute for Development Studies (Pids) said.
— Business Mirror

No price hike for pork amid culling – DA
There should be no price increase in pork products even as the government has started culling hogs to contain the possible entry of the dreaded African swine fever.
— The Philippine Star

Government eyes mandatory crop insurance
The government is being urged to provide mandatory insurance coverage for palay and other crops to help farmers survive crop destruction.
— The Philippine Star

Make medicines accessible to the people
The Coalition for People’s Right to Health (CPRH) welcomes the recent move of the Department of Health to draft an administrative order on the implementation of the maximum retail price for drugs and medicines.
— Inquirer.net

ASEAN COCI set to review 2020 proposals in Palawan
Delegations from member countries of ASEAN Committee on Culture and Information (ASEAN COCI) will gather this week (August 19-23)in Palawan to recommend and deliberate project proposals for 2020.
— Philippine Information Agency

Calendar for 2020 village, youth council elections released
Despite proposals to postpone the May 11, 2020 Barangay and Sangguniang Kabataan Elections (BSKE), the Commission on Elections (Comelec) on Tuesday released the calendar of activities for the polls.
— Philippine News Agency