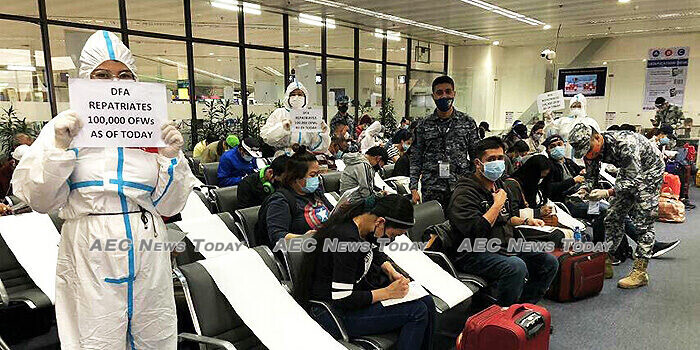 When the Philippines central bank released its ‘assumptions’ for the Philippine economy on June 4 it projected huge declines across key industries and sectors that have traditionally kept the Philippine’s afloat. Top amongst these were remittances from Overseas Filipino Workers (OFWs), the country’s single most important source of foreign exchange.

After reaching a record high of $33.5 billion in 2019, BSP Governor, Benjamin Diokno, said he expected the global COVID-19 pandemic will see remittances slashed by some $1.5 billion, with some 500,000 OFWs expect to return home after losing their jobs.

According to government figures there are some 10 million OFWs, representing about one-tenth of the country’s population.

Over the past several months Philippine foreign missions abroad have worked tirelessly to repatriate more than 100,000 distressed OFWs from all corners of the globe. Almost 200,000 others, however, remain abroad doing their work.

Considered as the modern-day heroes of the Philippines, remittances from OFWs account for almost 10 per cent of Philippines GDP, with one worker abroad often the sole income earner for a family, or extended family back home.

Talk to many young Filipinos today, graduates or not, and they don’t particularly care who they work for, or what task they perform, “provided that payday is a big pile of US dollars”, one OFW who requested anonymity said.

A 2019 report by the World Economic Forum (WEF) found that about 53 per cent of Filipinos aged 15- to 35-years-old wanted to work overseas.

Speak to any OFW and they will, often enthusiastically, describe their ultimate dream of a better life in a Western-style house with luxuries and extravagances back home for them and their families such as piped water, air conditioning, and a small garden.

For others the aspirations are much simpler. “I want to send some money back to my family so they can buy a water pump and sell water”, said one.

Another said she is paying for her three nieces to go to school, “but not an expensive one”, she quickly adds, “because my mother needs an operation and my father cannot work because he is arthritic”, she explained.

While the photos of social events and gatherings posted to the Facebook timelines of OFWs provide a snapshot of their “exotic life abroad”, speak to any and they’ll tell you its never as simple as that; life abroad is actually full of sacrifices, struggles, and setbacks.

At any moment an accident, illness, or loss of employment could see a finely tuned budget broken beyond the ability to pay for food.

While stories of tens of thousands of balikbayan boxes jammed full of “treasures” and “luxuries” (in reality mostly packets of biscuits and sweets) being sent to the Philippines during special occasions, or of OFWs working in exotic locations rubbing shoulders with celebrities might capture the imagination of those back home, away from camera phones and the tags of their Facebook friends, it is far from glitz and glamour.

Some may be lucky to have a kind employer, but others not. “No one will know how many times OFWs have to go hungry”, says one, or the ingenious ways they find to scrimp and save to be able to afford the things their families back home ask them to pay for.

The global coronavirus pandemic has hit OFWs hard. Many have lost their jobs and other are relying on friends who are still working while they wait for repatriation flights home.

Disheartened, some OFWs are finding that their families at home appear to be impervious to the daily hardships and worries of avoiding infection many face, trivialising it against more pressing matters such as someone’s baptism or birthday party in need of funding.

Returning home many OFWs are finding that their (often) many years of sacrifice and hardship have been in vain, the piggy bank empty with nothing left to help them or their family through the current pandemic.

Working abroad without putting aside some savings for their own retirement years, or to cater for a sudden emergency — such as a global pandemic — is one of the largest mistakes OFW’s have historically made.

With so many still stranded overseas waiting for flights and surviving on the generosity of friends and overseas Philippine diplomatic missions, it is doubtful if the remittance levels of the past will ever be reached again.

Moreover, the cycle of younger generations of Filipinos heading overseas as cash generating machines to improve the living standards of older generations is likely to be tempered also, with future “Bagong Bayaning Pilipino” learning to plan for their own future, instead of harbouring an expectation for support in their elder years from as yet to be born children.