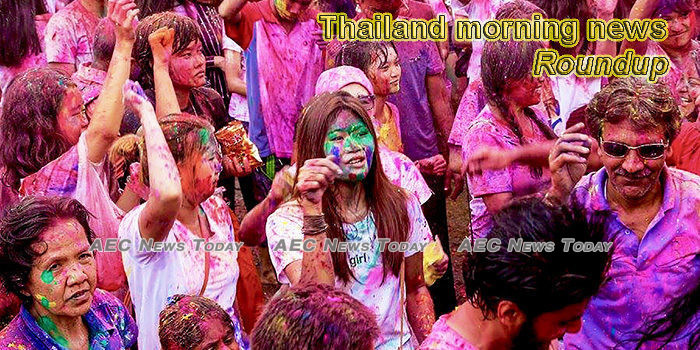 Hundreds of Thai workers miss flights due to lack of health insurance
Hundreds of Thais, working illegally in South Korea, have missed their flights to Thailand after they were prevented from boarding by airline officials at the airport in Seoul, because they could not produce insurance cover to the equivalent of about US$100,000.
— Thai PBS News

330 tonnes of masks were approved for export
The Department of Internal Trade (DIT) authorised the export of 330 tonnes of face masks in January and February when the items were in short supply and declared controlled products, according to the Customs Department.
— Bangkok Post

TU introduces water repellent face masks for medical use
Researchers from Thammasat University (TU) have introduced their innovation, a water-repellent face mask, which will be mass-produced and supplied to medical professionals, in the wake of the COVID-19 outbreak.
— Newsline (video)

Prosecutors won’t appeal construction tycoon Premchai’s sentence
The public prosecutors have agreed not to appeal the verdict of the Appeals Court against construction tycoon Premchai Karnasuta, in connection with the illegal hunting of a black leopard and other protected wildlife in Thung Yai Naresuan wildlife sanctuary in Thailand’s western province of Kanchanaburi in February 2018.
— Thai PBS News

Lazada investigating allegations of facemask price gouging
Online marketplace Lazada is investigating an allegation by the Commerce Ministry’s yesterday that protective facemasks for the Covid-19 coronavirus are being sold via its platform at illegally high prices.
— The Thaiger

Songkran homecoming could spread coronavirus, expert warns
People returning from cities to their home provinces for Songkran could be a vector for spreading the coronavirus disease to older members of their families, a disease specialist warned on Thursday.
— Bangkok Post

Plastic ‘ban’ flouted at shops
While Thailand seemed to have banned the use of plastic bags at major retailers from New Year’s Day, some stores, particularly 7-Eleven franchises, are still giving out single-use plastic bags to customers.
— Bangkok Post

Phuket airport readies to roll out COVID-19 entry requirements
Officers at Phuket International Airport today held a series of urgent meetings ahead of implementing the new requirements to be applied to people arriving in the country to help prevent the spread of the COVID-19 coronavirus.
— The Phuket News

Thailand encourages cloth masks amid surgical mask shortage
Thailand’s health authorities are encouraging people to make cloth face masks at home to guard against the spread of the coronavirus amid a shortage of surgical masks.
— New York Post

FDA says law does not prohibit people from making hand sanitizers
The Food and Drug Administration (FDA) has reiterated that hand sanitizers must have at least 70% alcohol content, in order to be effective in disinfecting the coronavirus.
— Newsline (video)

Private companies discuss air pollution measures
A number of private interests have held a seminar to address the problem of air pollution, which has become a major issue that is affecting members of the public, the economy, and the environment.
— Newsline (video)

TMRW’s unique engagement-focused business model sets the standard for digital banks around the world
TMRW by UOB, the first mobile-only bank for ASEAN’s digital generation, has seen customer engagement, its key measure of success, quadruple since its launch one year ago.
— Bangkok Post

COVID-19 fear pushes University classes online
Universities in Thailand have begun to move their classes online to help limit the spread of the novel coronavirus (COVID-19) in the country.
— The Phuket News

Gold mining company found guilty for avoiding environmental report
Former director-general of the Department of Primary Industries and Mines Somkiat Phuthongchaiyarit, has been found guilty of colluding with five other parties for trying to avoid the mandatory environmental impact assessment (EIA).
— The Thaiger

Thai government puts on hold plan to cancel visa on arrival and visa free entry for 21 countries
The government has put on hold its plan to suspend visa on arrival (VoA) for 18 countries and visa-free entry from high-risk areas (South Korea, Hong Kong and Italy) after an urgent meeting on Thursday (March 12).
— The Pattaya News

‘Better than nothing’: Thailand encourages cloth masks amid surgical mask shortage
Thailand’s health authorities are encouraging people to make cloth face masks at home to guard against the spread of the coronavirus amid a shortage of surgical masks.
— CNA

Tourism officials ponder moving Songkran to July, boosting domestic tourism
Joint ventures with the Tourism Authority of Thailand (TAT) and the Tourism Council of Thailand (TCT) are trying to solve worst case scenarios of losing over 1 trillion baht in revenue and 10 million in inbound guests to celebrate Songkran.
— The Thaiger

SET extends losses as virus fears batter sentiment
Share prices dived on the Thai stock exchange on Thursday morning after the World Health Orghanization declared a global Covid-19 pandemic and the US banned the entry of travellers from mainland Europe.
— Bangkok Post

PM praises whistle-blowing “Mam Po Dum” page for its social contribution
Prime Minister Prayut Chan-o-cha has been full of praise for the “Mam Po Dum” (Queen) whistle-blowing facebook page for its contribution to Thai society, especially for its recent exposure of the alleged hoarding of 200 million face masks by a politically-connected online trader.
— Thai PBS News

Back to the future: Can the reincarnation of Future Forward survive?
Their party has been dissolved and its executives banned, but that hasn’t stopped members of the now-defunct Future Forward from pursuing their dream. Thai PBS World’s Political Desk examines challenges awaiting it.
— Thai PBS News

Lopburi’s Monkeys Food War Blamed on Plunge in Tourism
Eyewitnesses on Thursday said a shortage of food offerings from tourists led to a brawl involving around a thousand monkeys in the historic city of Lopburi.
— Khaosod English

Thief who previously robbed and attacked Russian couple with knife in Pattaya arrested again for theft
Pattaya Police arrested a thief who broke into local houses and was discovered to be involved in a robbery and knife attack on a Russian couple five years ago.
— The Pattaya News

Domestic Violence Allegations Stalk Thanathorn’s Successor
The leader of a surrogate party for the disbanded Future Forward on Wednesday declined to discuss the allegations of domestic violence against his ex-wife.
— Khaosod English

Grab driver turns himself in over missing wallet: cash still missing
A Grab taxi driver has turned himself in to police in Chiang Mai police after a Dutch tourist lost 500 euros at an exchange booth in the city.
— The Thaiger

200 landmines cleared from old battleground near Burmese border
The army’s Thailand Mine Action Centre (TMAC) has announced that they’ve cleared more than 200 landmines from a former battlefield in the southern province of Chumphon, near the Burmese border.
— The Thaiger

Foodpanda Blacklists Deliveryman for Sexually Harassing Customer
A food delivery service said it fired one of its deliverymen for sending sexually-charged messages to a customer, while the police on Thursday said that a fine was all they could do.
— Khaosod English