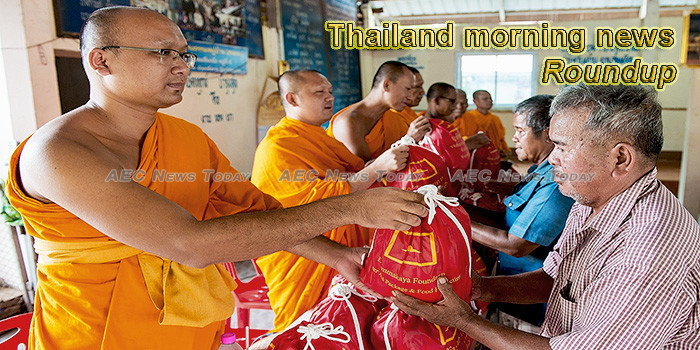 Thailand will use smart grid to predict outages
The Metropolitan Electricity Authority will use data to track outages and understand why some customers don’t pay on time.
— Gov Insider

Reskilling with leadership agility: the path to the future
Research conducted by McKinsey found that between 75 million and 375 million people — that is 3% to 14% of the global workforce — could be forced to change their job category by 2030.
— Bangkok Post

Thais allowed six cannabis plants per household under draft law
A party in Thailand’s ruling coalition has proposed a draft law that would allow Thais to grow a limited amount of cannabis at home, less than a year after the country legalised the drug for medicinal purposes and research.
— CNA

Majority agree with Nakhon Pathom airport plan: poll
A majority of people agree with a plan to build a new airport in Nakhon Pathom province west of Bangkok to reduce congestion at Don Mueang and Suvarnabhumi international airports, according to an opinion survey by the National Institute for Development Administration, or Nida Poll.
— Bangkok Post

World’s largest trading bloc to be concluded by the end of the year
The next negotiating round for the formation of RCEP will be held in Da Nang, Viet Nam on September 19-28 . RCEP is the Regional Comprehensive Economic Partnership, and when negotiated and signed, will become the world’s largest and most powerful trading bloc. RCEP includes all ASEAN economies, plus Australia, China, India, Japan, New Zealand […]
— The Thaiger

5G follies take on new urgency
Despite tremendous efforts by the telecom regulator to press ahead with 5G adoption by next year, achieving the goal may be a tall order considering the slow process of spectrum recall and the lack of a strong push by telecom players, wary as they are that such a plan may be too soon for Thailand.
— Bangkok Post

World Heritage help sought
Phuket Old Town needs more support from the government to be prepared for evaluation as a World Heritage Site, as the Fine Arts Department plans to submit the city to Unesco for the 2020 list.
— Bangkok Post

TCEB pushes Phuket as Asia’s MICE World Class City
The Thailand Convention and Exhibition Bureau (TCEB) has been holding discussions with the business sector in Phuket in an effort to position the province as a MICE World Class City, and making it the marine hub MICE City of Asia.
— NNT

NBTC to monitor digital imports
The National Broadcasting and Telecommunications Commission (NBTC) is being asked to strictly monitor the import of some digital equipment into the country amid a fresh worry over its possible threat to national cyber security.
— Bangkok Post

DTN: Thailand becomes world’s biggest rubber exporter
The Department of Trade Negotiations (DTN) has disclosed that Thailand is the world’s largest rubber exporter, with China as the biggest market thanks to its free trade agreements with many countries.
— NNT

Warnings out for bad weather in central and southern provinces
The Thai Meteorological Department says people in the lower Northeast, the Central region, including Bangkok and its vicinity, the East and the South (Andaman coast) should brace for more heavy rains and dangers from accumulated rainfalls today.
— The Thaiger

Wasting away
Plastic is omnipresent in Thailand. It’s found everywhere, from luxury shopping malls to 7-Eleven convenience stores, on almost every street corner and beneath the skin of some individuals. It’s even inside the stomachs of much marine life.
— Bangkok Post

“The fake university degree is irrelevant if Thammanat has a genuine BA degree” – Wissanu
“Wissanu refused to give a direct answer to a reporter’s question about whether Thammanat would still be considered qualified if the higher-level degrees were proven to be fake.”
— The Thaiger

NBTC to monitor digital imports
The National Broadcasting and Telecommunications Commission (NBTC) is being asked to strictly monitor the import of some digital equipment into the country amid a fresh worry over its possible threat to national cyber security.
— Bangkok Post

Large Thai business feeling the effects of US-China trade war, rise of the baht
The ongoing US-China trade war and the appreciation of the Thai baht against other currencies is now starting to impact larger corporates in Thailand.
— The Thaiger

Ombudsman to petition premier for paraquat ban
The Ombudsman plans to petition Prime Minister Prayut Chan-o-cha to impose a ban on the farming chemical paraquat, starting from early next year.
— Bangkok Post

Floods in Ubon Ratchathani slowly recede
The Minister attached to the Prime Minister’s Office, Tewan Liptapallop, visited people in flood-affected areas of Ubon Ratchanthani province. The water level of the Moon River has now dropped by one centimeter, but it will take some time for the flood water to be completely drained away, as the water level is almost four meters higher than the river banks.
— NNT

TFEX expands, thanks to trade war
The Thai economy is experiencing a slowdown mostly due to several external factors, particularly the volatile global economy and the ongoing trade war between China and the United States.
— NNT

Ministry aims to cut teen pregnancy rate
The Ministry of Social Development and Human Security (MSDHS) has set a target to reduce the number of teenage mothers from 39.5 for every 1,000 people to 25 by 2026.
— Bangkok Post

Artificial reefs boost marine life
After taking a lot of from the sea, CP Group has developed projects with local communities and officials to create natural habitats.
— Bangkok Post

30,000 uni students take the long and winding road up Doi Suthep
Some 30,000 students, past and present, and staff from the Chiang Mai University headed up Thailand’s tallest mountain yesterday on the university’s annual trek to Wat Phra That Doi Suthep.
— The Thaiger

CLMVT touted as global value chain
The area of the CLMVT (Cambodia, Laos, Myanmar, Vietnam, Thailand) is being urged to upgrade to become a new global value chain to accommodate the new economy and offset the world’s economic uncertainties.
— Bangkok Post

Hundreds of Pattaya tour guides rounded up in crackdown
A crackdown by the tourist police in Pattaya had resulted in 475 tour guides being fined for disregarding regulations related to tour company business, since the start of 2019.
— The Thaiger

Thai airways cracks down on smuggling…by its own airline staff
Thai Airways has introduced measures to deal with employees who avoid tax on goods they bring into country. The airline recently learned from customs that some of its flight attendants had been caught smuggling goods from Italy that exceeded the permitted allowance.
— The Pattaya News

Family of Thai woman who fell from fifth floor of Pattaya condo in June and survived claim French husband caused her to fall during argument
The family of a 28 year old Thai woman who suffered serious injuries to her spine after falling five floors at a condominium in Pattaya have claimed that her French husband caused her to fall during an argument.
— The Pattaya News

Pope Francis to Visit Thailand on Nov. 20 to 23
Pope Francis’ visit to Thailand is going ahead from Nov. 20 to 23, the Apolistic Nuncio of the Holy See announced Friday afternoon.
— Khaosod English

Officials Hope Mu Koh Ang Thong Makes ASEAN Heritage List
Marine officials are hopeful Friday that efforts to reduce plastic use on the tourist islands of Koh Samui, Koh Pha Ngan, and Koh Tao will be enough to nab a nearby national park a place on an international heritage list.
— Khaosod English

Goddess Pageant and Dragon Dance Mark 2019 ‘Moon Festival’
It’s the Mid-Autumn Festival – or as Thai people call it, Moon-Worshiping Festival – and there are more ways to celebrate it than just buying those high-calorie mooncakes.
— Khaosod English