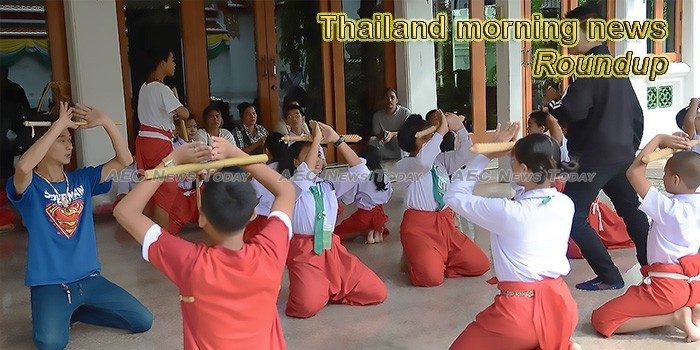 Constitutional Court orders dissolution of Thai Raksa Chart party
A court in Thailand on Thursday ordered the dissolution of a major political party ahead of this month’s general election because it nominated a member of the royal family to be its candidate for prime minister.
— Pattaya Mail

Least Rain in 30 Years Forecast as Drought Parches Upper Kingdom
A top meteorologist said the amount of rainfall this summer will be the lowest in 30 years, and 17 provinces have been warned of drought.
— Khaosod English

NLA offends forest dwellers with nation parks amendments
The much-awaited and controversial amendment of the 1961 National Parks Act was passed this morning with the National Legislative Assembly seeing 140 votes in favour, seven abstentions and one vote against.
— The Nation (very annoying popups)

Agency dismisses fear of drought, predict rains from late May
THE DRY SEASON, which is threatening many provinces with a shortage of water for consumption, is expected to only last until the third week of May.
— The Nation (very annoying popups)

Thousands expected at Muay Thai annual ceremony
Thousands of Muay Thai practitioners from around the world will get the opportunity to pay respects to their masters at the 15th annual World Wai Kru Muay Thai Ceremony being held March 16-17.
— The Nation (very annoying popups)

Unis to grow pot with DTAM
The Department of Thai Traditional and Alternative Medicine (DTAM) says it will work with universities to grow marijuana plants next month for the making of 16 formulations of medical cannabis.
— Bangkok Post (annoying popups)

Time for trusting Thai junta coming to an end
By the time the military holds elections on March 24, Thailand will have spent 1,767 days under military rule.
— ANN

EC slammed after members ‘take B12m’ of overseas trips
The Election Commission (EC) has come under fire after several commissioners took overseas trips costing a total of 12 million baht, although the election will be held in just two weeks.
— Bangkok Post

Baht volatility could mean outlook revisions
Business operators are likely to revise GDP and export projections next month amid concern over the baht’s volatility and pressure on shipments.
— Bangkok Post

Chikungunya outbreak tops 2,000 in Thailand
Officials with the Bureau of Epidemiology with the Thailand Ministry of Health have reported a total of 2063 chikungunya cases from 19 provinces, through Mar. 4. The southern part of the country has seen the most cases.
— Outbreak News Today

Ad spending set to rise 5%
Thailand’s advertising spending this year is expected to increase by at least 5% thanks to growth in digital and outdoor advertising, according to the Advertising Association of Thailand.
— Bangkok Post

Thai Raksa Chart plans ‘Vote No’ strategy
The dissolved Thai Raksa Chart Party (TRC) is taking a defiant stance in the wake of Thursday’s court action, as it plans to encourage its supporters to vote “no” in constituencies where the Pheu Thai Party has not fielded candidates to pave the way for the party to gain more votes in election reruns, a TRC source said.
— Bangkok Post (annoying popups)

‘Buddhism under threat’: Thai election gives platform to radicals
A clothing and cosmetics model and a former monk are campaigning together for Thailand’s election at a market outside Bangkok. The message: Buddhism is under threat.
— Reuters

NGV subsidy to be shifted to ministry
The Energy Ministry plans to shift the financial burden of the natural gas for vehicles (NGV) subsidy under the state welfare smartcard scheme, roughly 1.7-1.9 billion baht per year, from PTT Plc to the Finance Ministry.
— Bangkok Post

Thai firm due to start on 11km rail section
The Thai-Chinese high-speed railway project linking Bangkok and Nong Khai is making progress as the Thai constructor, Civil Engineering Co, has been awarded a contract to start building the 11-kilometre Sikhiu-Kut Chick section next month.
— Bangkok Post

Stop Senate picks secrecy
In stark contrast to the race for Lower House seats in the March 24 general election, the ongoing process of selecting a majority of senators has fallen under the public radar.
— Bangkok Post

ADC Act gets more teeth
The draft amendment to the Anti-Dumping and Countervailing (ADC) Act that adds new chapters regarding anti-circumvention penalties has received National Legislative Assembly (NLA) vetting, with enforcement expected by the end of this year.
— Bangkok Post

Army Chief Swears to Only Back Gov’t Loyal to King
At an unprecedented oath-swearing ceremony held Thursday, army commander-in-chief Apirat Kongsompong vowed to only support a government loyal to the monarchy.
— Khaosod English

‘A real source of hope’: social media opens Thailand’s junta to criticism
Social platforms wield increasing power in Thai politics, where traditional media remain under the iron grip of the military
— The Guardian

Populist policies dominate election campaigning
Populist polices in one form or another seem to be dominating the debate for the upcoming general election. And a welfare state appears to be most common catchword.
— Thai PBS News

Thai Net Reacts to Party Dissolution With Pungent Memes
The internet was overwhelmed with sarcasm and dismay Thursday after a five-month-old political party was disbanded three weeks before Election Day.
— Khaosod English

Phuket’s aircraft selfies to be moved from end of runway
Phuket airport authorities are looking to restrict photography of aircraft from the northern end of Nai Yang beach, at the western end of the single Phuket International Airport runway.
— The Thaiger

Thai zoo implements measure to ‘de-stress,’ cool down animals amid summer heat
Apparently it’s not only humans who are being affected by the unforgiving heat of Thailand’s “summer,” which officially began on Feb. 21, it’s stressing out animals as well.
— Coconuts (paywall)

Bangkok overpass closed for six months
The Asoke Overpass at Bangkok’s Phetchburi-Ratchadapisek Intersection will be closed for maintenance from March 9 to September 4, a source at the Bangkok Metropolitan Administration said on Thursday.
— The Nation (very annoying popups)

Analysis: How dissolution changes complexion of Thai political game
The mathematical context of the March 24 Thai general election does not change in the wake of the Constitutional Court’s dissolution of the Thai RaksaChart Party.
— Thai PBS News

Taiwan to soon start checking luggage of all travelers from Thailand
Customs checks of all luggage brought into Taiwan by passengers from Thailand will be implemented before the end of March as part of the government’s efforts to prevent the entry of African swine fever (ASF), an official said Thursday.
— Focus Taiwan

Ancient Thailand, under threat
Centuries before the rise of Sukhothai, and even the Khmer Empire preceding it, the Dvaravati civilisation (6th-11th century) dominated much of what is now Thailand. Few ruins from the period remain.
— Bangkok Post

Thailand’s Rebel Artists
The rap group’s hit single, What My Country’s Got, has been viewed almost 60 million times since it was uploaded last October.
— Aljazeera

National Herb Expo kicks off at IMPACT
The Ministry of Public Health has invited the general public to visit the National Herb Expo to discover a wide range of herbal remedies and traditional therapies.
— NBT World (video)

Q1 home transfers surge on LTV limits
New home transfers in the first quarter this year are expected to surge 66% to 200 billion baht as homebuyers rush to secure mortgages before the new lending curbs take effect on April 1, 2019.
— Bangkok Post