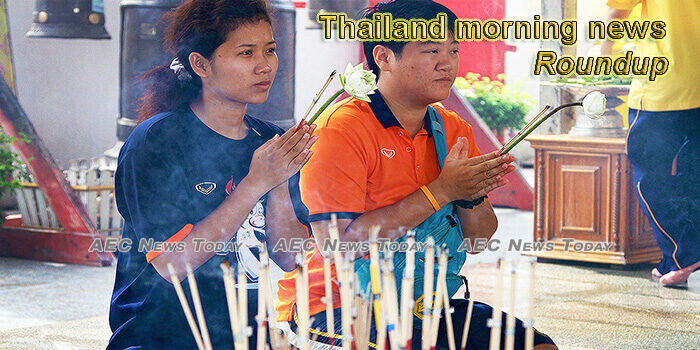 Thai Airways to offer partial rehab plan in August
Thai Airways International (THAI) will speed up the drafting of its rehabilitation plan to submit it to the Central Bankruptcy Court on Aug 17, when the court is scheduled to begin examining the airline’s rehabilitation request, acting THAI president Chansin Treenuchagron said on Friday.
— Bangkok Post

Poll shows majority of Thais still worry about coronavirus
Although there have been no locally transmitted Covid-19 cases in Thailand for 41 days, a majority of locals are still worried about the spread of the virus, according to the most recent survey by Suan Dusit Rajabhat University, better know simply as the Suan Dusit Poll.
— The Thaiger

PM to opposition: “Don’t insult my intelligence.”
“The PM emphasised that his government has never approved a project to favour any particular individual or company.”
— The Thaiger

Millions headed home for holiday long weekend
The Transport Ministry says more than 2 million people used public transport on Friday, leading up to the Asahna Bucha Day and Buddhist Lent holiday weekend, to travel to their provincial homes.
— The Thaiger

Pathum Thani police hunt “100 million baht auntie”
Police in Pathum Thani, just north of Bangkok, are tracking down a mysterious loan shark known as “Mrs. Millionaire” to face charges that she hired a man to beat a vendor who owed her money, leaving him with permanent brain damage.
— The Thaiger

Myanmar girl, 5, raped and killed
A five-year-old Myanmar girl was found raped and murdered on Saturday (July 4) in the forest in Tak province.
— The Nation

Over 1,700 foreign nationals expected to visit Thailand in August for medical services
More than 1,700 people of 17 nationalities have applied to come to Thailand for medical treatment under medical and wellness programs, said CCSA spokesman Dr. Taweesin Visanuyothin on Friday.
— Thai PBS News

Foreign diplomats invited to see coconuts being picked by monkeys
The Thai Commerce Ministry will invite members of the foreign diplomatic corps to observe the harvesting of coconuts by pigtailed macaque monkeys, in an effort to prove that the process does not involve cruelty to animals, as alleged by animal rights group PETA.
— Thai PBS News

Thai army confirms US army agrees to abide by Thai anti-virus regulations
The US military delegation, due to visit Thailand on July 9th and 10th, will strictly observe the regulations imposed by the CCSA to prevent the spread of COVID-19, Thailand’s Army Public Relations Centre has announced.
— Thai PBS News

Violence flares again in deep South with explosion, gunfire
Violence in Narathiwat, one of three restive southernmost provinces, has flared again with gunfights and a bomb explosion in a small village in Su-ngai Padi district, officials said yesterday.
— Bangkok Post

Some 5 million Gen Y, Z employees staring at possible job losses
Approximately 5 million Generation Y and Z employees face economic uncertainty as they risk being laid off because they do not have enough working experience, and their salaries were between Bt10,000 and Bt20,000, the University of the Thai Chamber of Commerce pointed out.
— The Nation

Standards agency cracks down on firms for smuggling, selling low quality products
The Thai Industrial Standards Institute (TISI) recently seized a cache of products that were brought into the country illegally through the National Single Window (NSW) system as well as a stock of low-quality goods that were falsely given the TISI stamp.
— The Nation

Suvarnabhumi gets 90-minute test lab
A Covid-19 test with a 90-minute turnaround will be provided at Suvarnabhumi airport for those who are suspected of carrying the virus.
— Bangkok Post

KTC expects profit to miss target by Bt1 billion due to Covid-19 impact
Krungthai Card (KTC) estimates that its profit for the year would be Bt1 billion below its target following the reduction of interest to support its customers.
— The Nation

NESDC looks to B400bn budget
The government’s think tank, the National Economic and Social Development Council (NESDC), insists the 400-billion-baht budget earmarked for economic and social rehabilitation under the government’s 1.9-trillion-baht coronavirus relief measure will be instrumental in stopping the economy from plunging more than 5-6% this year.
— Bangkok Post

Tourism scheme offering discounts on rooms, restaurants and flights opens for registration on July 15
The government’s tourism stimulus scheme “Rao Pai Tiew Gun” (Let’s travel together) will open for registration on July 15 with 5 million people eligible for discounts in hotel accommodation and eating in restaurants and 2 million people eligible for partial refund of flight cost.
— The Nation

BMTA to run over 22,000 bus trips a day during long weekend
The Bangkok Mass Transit Authority (BMTA) has arranged buses to serve people travelling to bus terminals and airports during the long holiday weekend from July 4 to 7.
— The Nation

Man ‘mistaken to be animal’ allegedly killed by friend while hunting
A hunting expedition by friends went fatally wrong when one friend allegedly shot dead another apparently mistaking him to be an animal.
— The Nation

US ambassador meets deputy PM to discuss Thailand’s “great investment potential”
US Ambassador to Thailand Michael George DeSombre, who raised eyebrows in May when he described the US as “a better friend than China,” has praised the kingdom’s “great investment potential”, highlighting the expansion of current projects and further support for industry as ways to promote further cooperation.
— The Thaiger

Thailand gets quarantine “red light” from UK, “green light” from EU
Despite reaching 41 days without a locally transmitted case of Covid-19, Thailand is still designated as a “red light” country and Thais arriving in England will still be required to self-isolate for 14 days.
— The Thaiger

Thai cities getting pricier for expats
Bangkok and Chiang Mai remain among the 30 most expensive cities for expats in Asia, with Ashgabat in Turkmenistan still on top of the global and Asian tables.
— Bangkok Post property

Hear That Thunder Rumbling? Brace for a Week of Rain
That sound of fireworks going off on Independence Day could very well be a thunderstorm coming your way. And it won’t stop there.
— Khaosod English

Pattani Eyes Chinese Market to Sell Its Native Durian
Thailand’s southern province of Pattani said it hopes the Chinese market will pick up its native grown Puangmanee durian to assist the province’s economy which had been hit hard by the COVID-19 pandemic.
— Khaosod English

Hope, fear as kingdom’s gates creak ajar
Tourism operators and residents in five southern tourist destinations which may open up to foreign travellers next month are optimistic about the government’s travel bubble scheme.
— Bangkok Post

UK supermarkets may ban Thai coconut products over use of monkeys
The Thai Animals Protection Association has urged the Commerce and Agriculture ministries to issue a clarification to British retailers quickly about the use of pigtailed macaques in the harvesting of coconuts in Thailand.
— Thai PBS News

Thai gamers trash talk proposed ban on long, violent streams
Gamers are opening fire on rumors that a ban on streaming violent games and long sessions is in the works.
— Coconuts Thailand

Opinion: Let’s Apply Our Virus Vigilance on Other Calamities
Imagine what Thailand can achieve if it puts in daily government updates and summary of coronavirus infections to other calamities that plague our country.
— Khaosod English

Film fans bid farewell to Thailand’s temple of cinema, Scala
Bangkok’s last surviving standalone cinema – the iconic Scala at Siam Square – is bidding farewell to movie fans this weekend after half a century of ups and downs.
— Thai PBS News