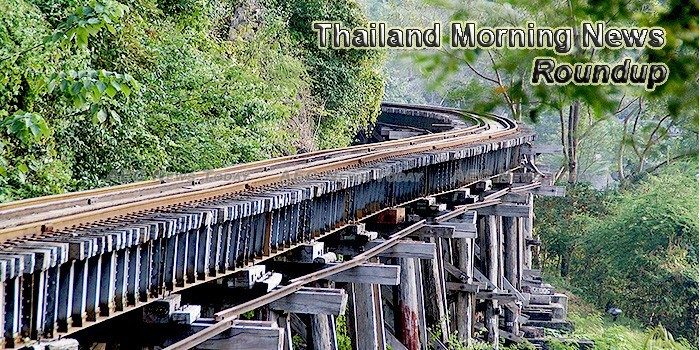 Consumer confidence takes a turn for the worse
Consumer confidence dropped for the first time in seven months in February, as people were worried about low commodity prices, the baht’s strength, the political situation and wage rises.
— Bangkok Post

OSMEP expects Thailand’s SMEs to grow 5.0%-5.5% in 2018
The Office of SMEs Promotion (OSMEP) is optimistic that the country’s small and medium-sized businesses will all register a considerable growth rate this year.
— NNT

Policy rate likely to stay unchanged
The Bank of Thailand (BOT) said it is not necessary to raise the policy rate amid the upward trend in global interest rates as fragility remains in the local system despite recovery of the economy without inflationary pressure.
— The Nation

Experts throw weight behind SEC to handle digital assets
The Securities and Exchange Commission (SEC) has received endorsement from financial experts to regulate all aspects of digital assets and virtual fund-raising when a royal decree is enacted to that effect.
— Bangkok Post

Thailand lauded for better treatment of migrant workers
The International Labor Organization (ILO) has claimed that the Thai fishing industry has improved in almost every aspect.
— NNT

Pace picks up on fast train project
THE Ministry of Transport (MOT) expects to have 13 contracts under the first phase of the Thailand-China high-speed train project put out for bidding this year.
— The Nation

Foreign Affairs Min reports on combating IUU fishing
The Ministry of Foreign Affairs has revealed that a government committee has proposed establishing a network for fishing operators across 22 coastal provinces. Its infrastructure would support local fishers, foster a labor network, and play a role in conflict resolution.
— NNT

Over 1 billion baht approved to support SMEs and Startups this year
The Small and Medium Enterprise Board (SME Board) has held its first meeting for 2018, chaired by the Prime Minister.
— NNT

Condos, low-rise homes still hot
Thailand’s overall residential market in 2018 is expected to stay positive and continue improving from last year with growth of 7.9% on the demand side and 10.9% on the supply side, largely due to stronger confidence and a robust economy.
— Bangkok Post

Singha puts investment arm on hunt for startups
SINGHA Corporation has set up a new investment arm, Singha Ventures, to back startups identified with potential in Thailand and around the world.
— The Nation

OAG officials to help in probing plunder of fund for the destitute
Officials of the Office of the Auditor-General will be asked to help the Public Sector Anti-Corruption Commission in the investigation of widespread corruption in the centres for the protection of the destitute.
— Thai PBS

Northern provinces start drought relief schemes
The military and the administrative sectors have initiated drought relief measures in the provinces of Nan and Phetchabun, where the dry season has begun to take its toll.
— NNT

Gas block auction gets back on track
After five years of uncertainty, the auction of the Bongkot and Erawan gas fields in the Gulf of Thailand is finally scheduled to take place next month as originally planned, says the National Energy Policy Council (NEPC).
— Bangkok Post

Premchai allegedly vows to “give anything” if forestry officials let him go
Counter Corruption Police Division investigators today (March 8) questioned five forest rangers regarding the allegation that Italian-Thai boss Premchai Karnasutra tried to bribe the arresting rangers to let him off the hook.
— Thai PBS

Low levels in the Mekong River impacting cargo ships near Chiang Rai
A reduction in water releases from Chinese dams and local drought conditions have resulted in the water level of the Mekong River in Chiang Rai dropping, and impeding ship transport.
— NNT

PM chairs SMEs 4 0 meeting
The government is determined to steer forward its efforts to support and strengthen the new generation of small- and medium-sized enterprises.
— News Today (video)

Citi Thailand goes for double-digit growth in number of clients
Citibank Thailand expects a double digit growth in the total number of customers this year, said the bank’s head of credit cards and loans Sandeep Batra.
— The Nation

Deputy PM proposes more airports in South
Deputy Prime Minister Somkid Jatusripitak has instructed the Airports of Thailand (AoT) to urgently reduce the over crowded state of all of its airports. For a start, he suggested that it construct airports in tourist cities in the South.
— NNT

LPN : Protector of rights of migrant workers
In parallel with the government’s mission to legalize all migrant workers in the Kingdom, the Labor Rights Promotion Network Foundation plays an important role in creating awareness among this group of workers about their rights and ensuring their access to welfare. Find out more about this matter from our today’s special report.
— News Today (video)

Mekong countries meet on provision of assistance for human trade victims
The Thai Ministry of Social Development and Human Security is playing host to a workshop of countries in the Mekong Sub-region, focusing on assisting victims of human trafficking.
— News Today (video)

Vietnam Morning News For May 17