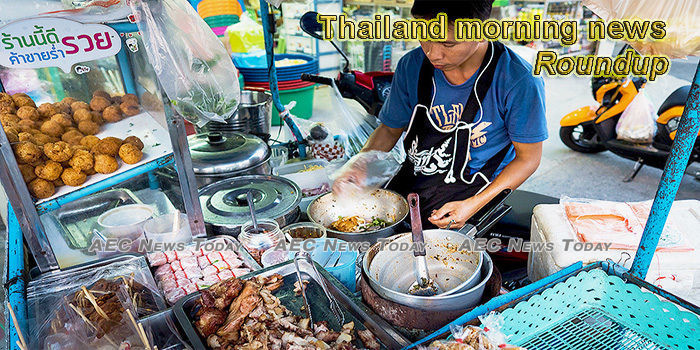 Energy Ministry prepares fuel measures amidst global energy concerns
The Ministry of Energy has prepared measures to handle the situation in the form of oil reserves and pricing measures to minimize any potential effects on the general public.
— NNT

B3bn fund to combat water crisis
The cabinet will on Tuesday be asked to approve a budget of 3 billion baht to combat water shortages in vulnerable areas which may worsen in the coming months, the Office of National Water Resources (ONWR) said.
— Bangkok Post

US Informs Thailand About Iraq Airstrike in Advance, MFA Says
Foreign affairs minister Don Pramudwinai said Tuesday the U.S. government informed him of the military operation that killed Iran’s top general a day before it was carried out.
— Khaosod English

Autopsy shows rare Omura whale’s death caused by humans
Human activity has been blamed for the death of a rare Omura whale, which was recently washed ashore on Lanta Island in Thailand’s southern coastal province of Krabi.
— Thai PBS News

Thailand plans to increase budget deficit 11.5% for fiscal 2021
Seeking to bolster a flagging economy, Thailand’s cabinet approved on Tuesday a plan to boost its budget deficit by 11.5% from the current fiscal year to 523 billion baht ($17.33 billion) for the 2021 fiscal year starting on Oct. 1.
— Reuters

TAT eagerly awaits Indian tourist surge
Thailand expects a windfall from the Indian tourist market if travellers stay away from the Middle East and turn eastward instead.
— Bangkok Post

Two out of three CEOs say the 2020 Thai economy will not improve – Survey
Many CEOs, based in Thailand, don’t expect Thailand’s economy to improve during 2020. Many surveyed cited global economic uncertainties, according to the “CEO Survey” of 100 individuals.
— The Thaiger

Government says sufficient water supply until July
The Ministry of the Interior has indicated that the current supply of tap water is adequate until the middle of this year.
— Newsline (video)

Run-off dam met with reservation
The hydro-electric power plant planned in Luang Prabang will not have any big transboundary impact on Thailand, said the head of Laos’ Department of Energy Policy and Planning, who argued that with Thailand’s support, the project stands to benefit everyone.
— Bangkok Post

Thanathorn for Thai Prime Minister?
Last week, a survey by Thailand’s National Institute of Development Administration (NIDA) named Thanathorn Juangroongruangkit “the most suitable person” for the post of Thai Prime Minister and his Future Forward Party as the best party to lead the country.
— The Asean Post

Baht Seen Defying Bank of Thailand’s Attempts to Halt Gains
Baht bulls are on guard as they gauge the Thai central bank’s willingness to take more action to curb gains in the currency.
— Bloomberg

Exporters fret over trade effect of recent conflict
Exporters and the Commerce Ministry are concerned the US-Iran conflict may stymie global trade if the standoff worsens.
— Bangkok Post

Four Passengers Arriving from China Quarantined in Thailand
Four travellers from Wuhan China have been quarantined after they reported fevers shortly after at Suvarnabhumi airport in Bangkok .
— Chiang Rai Times

Gov’t sets up water crisis center
Many provinces of Thailand are now facing a drought disaster, which is expected to be more severe than last year. In response, the government has set up a special command center chaired by the Prime Minister, to handle the crisis and assist affected village.
— NNT

Looking to supply chain sustainability for driving business in 2020
Make no mistake about it, e-commerce in Thailand is booming.
— Bangkok Post

Uttama gets agencies braced for war
Finance Minister Uttama Savanayana has instructed all agencies under the ministry to monitor the escalating US-Iran tension and stand ready to roll out measures to shore up economic momentum if needed.
— Bangkok Post

All aboard for Thailand Yacht Show
Yachting aficionados and wealthy lifestyle enthusiasts are invited to the fifth edition of “Thailand Yacht Show”, which will take place at Royal Phuket Marina from Thursday until Sunday.
— Bangkok Post

PM gives embassy authority to evacuate Thais in Iran
The Prime Minister has given authority to the Thai embassy in Iran to evacuate Thai citizens in the country if it is considered necessary, as the tension in the Middl East rises following the US airstrike that killed a revered military commander Qassem Soleimani.
— NNT

Run to oust Prayut blocked in Ubon, Phayao
Authorities in two provinces are refusing to allow people to take part in local versions of the campaign-run to oust Prime Minister Prayut Chan-o-cha planned for Sunday in Bangkok.
— Bangkok Post

Thai labour law year in review
In this first Human Resource Watch column of 2020, Tilleke & Gibbins’ labour and employment lawyers take a look back at three of the most common issues that our clients have asked us about over the past year, including some of the most significant recent legal developments and applications that employers in Thailand have been facing.
— Bangkok Post

Thais beat Taiwan in quest for ticket to Tokyo Olympic
The Thai women’s volleyball team cruised past Taiwan on Tuesday in a bid to claim a historic Olympic berth on home soil.
— Bangkok Post

Monk Accepts Offerings on Delivery App, Gives Blessing via Video Call
A monk in the southern region caused an online sensation Tuesday when he announced that worshipers can make merits at his temple by ordering online delivery.
— Khaosod English

National Park Sets Bounty for Stolen Eggs of Rare Sea Turtle
A chief of a national park in Southern Thailand on Saturday said he would reward those with information leading to the stolen eggs of Thailand’s rare sea turtle meanwhile warning that the culprits will face maximum penalty.
— Khaosod English