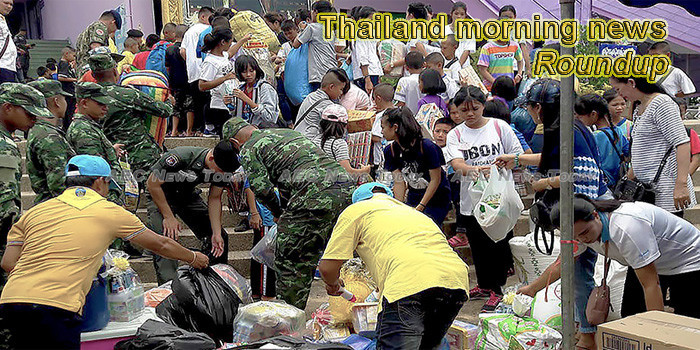 Baby dugong Mariam is dead
Mariam, the orphaned baby dugong and darling of many netizens in Thailand for her much-publicized four month struggle to survive under the care of veterinarians, died of shock shortly after midnight Friday night.
— Thai PBS News

Most Thais feel it is inappropriate to politicize on the oath issue – poll
The majority of the respondents disagree with the politicization of Prime Minister Prayut Chan-o-cha’s alleged incomplete oath taking, according to Super Poll. Super Poll Research Office director Noppadol Kannikar said.
— Thai PBS News

Thailand seeks ways to boost exports amid US-China trade war
The Ministry of Commerce has held a meeting of the Joint Public and Private Sector Consultative Committee (JPPSCC) to seek measures to stimulate Thai exports which has been affected by the trade dispute between the US and China.
— Vietnamplus

Finance Ministry plans rejig of fuel excise tax
The Finance Ministry wants to revamp the structure of the excise tax on fuels to base it on carbon dioxide (CO2) emissions, with the aim of reducing greenhouse gas emissions to protect the environment.
— Bangkok Post

PTT to invest 30bn baht in ECC
The global economic slowdown and trade war have caused fluctuations in energy prices. In response, PTT Public Company Limited has allocated some 30 billion baht, to invest in newer forms of energy in the Eastern Economic Corridor (EEC), while the company’s profit in the first half of 2019 underperformed.
— NBT World (video)

Confusion reigns in TM30 palaver
Long-term foreign residents of the kingdom have spent the weekend scratching their heads in bewilderment over the baffling requirements of the now notorious TM30 form after a recent forum at the Foreign Correspondents’ Club of Thailand (FCCT) with senior Thai immigration officials present on the panel.
— Bangkok Post

Thai animal traffickers keep getting away with crimes, and authorities ask for U.S. help
When Thailand arrested suspected animal trafficking kingpin Boonchai Bach last year, it was hailed by animal rights groups as a watershed day and a chance to unravel Hydra, the vast Vietnamese trafficking ring he was believed to be part of.
— The Washington Times

Thailand moves up 13 notches on LPI
Thailand is now ranked the second best country in ASEAN in terms of logistics infrastructure, and 7th in Asia.
— NBT World (video)

Visa waiver proposal under fire
The Foreign Ministry has asked the government to review the economic ministers’ proposal to offer a visa waiver to Chinese and Indian tourists as a part of the government’s economic stimulus package.
— Bangkok Post

Thailand, Myanmar strengthen ties in food culture
The Thai commercial attaché to Myanmar together with the Thai Restaurant Association have led a group of Thai restaurant entrepreneurs to participate in the Food and Beverage Expo in Yangon, Myanmar.
— NBT World (video)

Mekong water level rising steadily
Water in the Mekong river in this northeastern border province is rising steadily by about 60-70 centimetres per day, pushing up the water level to about 7 metres, or about 6m below the spill-over point on the river bank, local media reported.
— Bangkok Post

Bangkok bombings top public’s concerns: Poll
The people are most concerned about the recent bombings in Bangkok, while most are not confident the government will survive the ongoing political crisis, according to the result of an opinion survey by the Suan Dusit Rajabhat University, or Suan Dusit Poll.
— Bangkok Post

Thai farmers reluctant to scale down use of ‘toxic’ herbicides
Thai farmers say they oppose the proposed bans on herbicides paraquat, glyphosate and chlorpyrifos. The Thai government plans to phase out three chemical weed killers, widely used by Thai farmers, by the end of this year.
— The Thaiger

Ministry grills Thai Airways over B156bn aircraft purchase
The Transport Ministry wants the loss-ridden Thai Airways International Plc (THAI) to provide clear details of all aspects of its 156 billion-baht plan to buy or lease 38 new aircraft, to ensure the airline will not suffer any further losses.
— Bangkok Post

BAM gears up for major IPO
The Bank of Thailand will own less than half of Bangkok Commercial Asset Management (BAM) if the country’s biggest distressed asset manager sells all 1.77 billion shares in its long-anticipated initial public offering.
— Bangkok Post

Everything I know about the TM30 form after attending chamber of commerce meetings and speaking at the FCCT
The hottest topic for expats over the last few months is the controversial TM30 form. This is basically a form
— Richard Barrow in Thailand

PTT to invest 30bn baht in ECC
The global economic slowdown and trade war have caused fluctuations in energy prices. In response, PTT Public Company Limited has allocated some 30 billion baht, to invest in newer forms of energy in the Eastern Economic Corridor (EEC), while the company’s profit in 2019’s first half was reduced by higher oil prices.
— Pattaya Mail

Phuket villager braves the surf to rescue tangled turtle
A local villager in Phuket’s north has risked his own life to retrieve a young sea turtle caught up in fishermen’s netting.
— The Thaiger

Hat Yai seeks shot in medical tourism arm
If you mention medical tourism in Thailand, attention immediately shifts to Bangkok. However, calls are being echoed for the development of a medical tourism hub to be based in the commercial district of Hat Yai in Songkhla province in order to tap into the growing demand for services.
— Bangkok Post

Opinion: TM30 Alienating Law-Abiding Aliens
Imagine yourself an expat in a country dubbing itself as amazing but every time you travel from one province to another for longer than 24 hours you must report to police within 48 hours of arrival in the new place because you are an alien.
— Khaosod English

Food of the future? Five-star edible insects served up as Thailand gets creative with bug business
With concerns being raised about the environmental impact of relying on traditional meats as a source of protein, attention is being turned to alternatives such as insects – with Thailand one of the countries leading the push towards bringing them into the culinary mainstream.
— CNA

Beef noodle soup that’s been simmering for 40 years delivers a taste of old Thailand
At this beef noodle shop in Bangkok, you can order a bowl of soup that is more than 40 years old.
— CNA

2 in 5 Thais Accept Begpackers, Survey Says
Despite widespread online outrage against tourists busking on the streets of Asia, a survey has found that nearly half of Thais have a sabai sabai impression of begpackers.
— Khaosod English

Thai Junta Critic: Prison ‘Like Hell on Earth’
Prison proves if you are a fighter,” says Siraphop Kornaroot. The 55-year-old Thai poet and author should know, having spent the past five years in a Bangkok jail without having been convicted of a crime. Released on bail in June, he still faces up to 45 years behind bars if found guilty at his long-running trial, currently taking place in a closed military court.
— VOA

Thailand’s lost baby dugong Marium dies from shock, eating plastic
An eight-month-old dugong, nurtured by marine experts after being found lost near a beach in southern Thailand, has died from what biologists believe was a combination of shock and ingestion of plastic waste.
— ABC News

Thailand chikungunya case tally nears 6,000
In an update on the chikungunya situation in Thailand, the Ministry of Health reports that since the beginning of the year through August 4, 5,996 cases from 44 provinces have been reported, an increase of some 1,500 in about one month.
— Outbreak News Today