Thailand Morning News For May 5 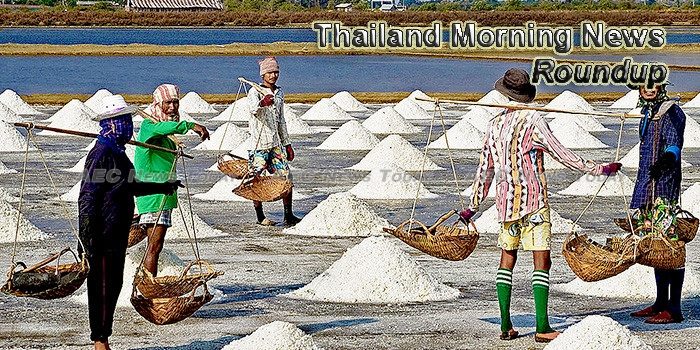 Thai media demand gov’t withdraw media regulation bill
Thai media organizations called on the military government Wednesday to withdraw a bill that would set up an appointed council to regulate print and online media and require journalists to be licensed or risk jail.
— Pattaya Mail/ AP

Panel to oversee single info window
THE NATIONAL committee on logistics development yesterday gave the green light to the establishment of a unit for management and development of a single window linking electronic information for imports, exports and logistics.

Sub deal to be signed before completion of vetting process
Navy chiefs to attend signing ceremony in Beijing on Sunday for purchase of first of three submarines despite criticism.
— The Nation

Alibaba’s Ma warns of stifled e-commerce
Developing countries looking to e-commerce as a way to bolster their emerging economies need to prioritise the sector’s growth instead of creating regulations and taxes that could kill it in its infancy, Alibaba Group executive chairman Jack Ma told a recent UN gathering in Geneva.
— Bangkok Post

Energy peak could hike electricity bills
Soaring temperatures have pushed energy usage to 30,303.4 Megawatts (MW) per day, the year’s highest figure so far and possibly a cause for a hike in production cost.
— NNT

13 groups get nod for tourism cash
The Tourism Department has approved a budget of 1.3 million baht for 13 community tourism groups to develop tourism personnel and infrastructure.
— Bangkok Post

ISPs ask Facebook to kill content
A group of local internet service providers (ISPs) has emailed an official request to Facebook CEO Mark Zuckerberg asking the company to block content on its web pages in Thailand that breaks the country’s strict lese majeste laws, as ordered by the Criminal Court.
— Bangkok Post

Thailand to seek Interpol alert for fugitive ‘Boss’
Thai police will seek an Interpol blue notice for Vorayuth “Boss” Yoovidhya on Friday after British police said they could not find the heir to the Red Bull fortune who is wanted in a hit-and-run case that killed a police officer in Bangkok in 2012, Pol Maj-General Apichat Suriboonya, head of the Royal Thai Police’s Foreign Affairs Division, said on Thursday.
— The Nation