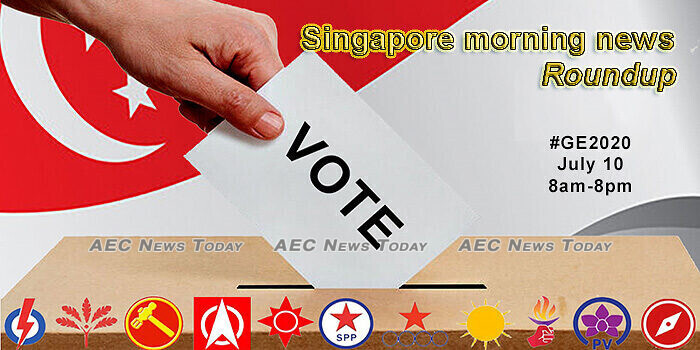 Symptomatic, unlinked COVID-19 cases in the community a ‘greater concern’ even as number of daily cases fall: Gan Kim Yong
While the number of daily COVID-19 cases in Singapore has declined, the number of symptomatic, unlinked cases in the community is of a greater concern as a significant increase could signal underlying community transmission, Health Minister Gan Kim Yong said on Tuesday (Jul 7).
— Channel NewsAsia (very annoying popups)

384 dormitories declared cleared of Covid-19 virus: MOM
THE Ministry of Manpower (MOM) announced on Tuesday that 384 more dormitories have been cleared of the novel coronavirus.
— The Business Times

30% rise in inquiries to MSF on family conflicts
There has been a 30 per cent increase in the average number of inquiries to the Ministry of Social and Family Development’s (MSF) adult and child protective services in the post-circuit breaker month, compared with during the circuit breaker.
— Straits Times (annoying popups)

COVID-19: No active plans to go back to Phase 1 after election, says MOH director of medical services
There are no active plans to return to Phase 1 of the post-circuit breaker period immediately after the General Election, the Ministry of Health’s (MOH) director of medical services Kenneth Mak said on Tuesday (Jul 7).
— Channel NewsAsia (very annoying popups)

Singapore’s global schoolhouse upbeat beyond short term
THE coronavirus pandemic has been a spanner in the works for the international student market here, which had been picking up in recent years.
— The Business Times

About half of unlinked COVID-19 community cases detected after circuit breaker were from construction sector: Lawrence Wong
About half of the unlinked COVID-19 community cases detected after the circuit breaker was lifted are from the construction sector or linked to construction-related activities, Minister for National Development Lawrence Wong said on Tuesday (Jul 7).
— Channel NewsAsia (very annoying popups)

COVID-19: One-stop mental health platform launched to match users with resources and helplines
A website with various resources on mental health was launched on Tuesday (Jul 7) to help users assess their wellbeing and match them with forms of assistance if needed.
— Channel NewsAsia (very annoying popups)

No second wave of Covid-19 infections yet, but risk is there as shown in Tampines cases: Gan Kim Yong
Mr Gan said he was concerned that the Tampines cluster could be a major outbreak for Singapore, and the Covid-19 task force decided to test everyone in the section of the building.
— Straits Times (annoying popups)

Good government needed to fight Covid-19, support economy: PM Lee
PRIME Minister Lee Hsien Loong has once more stressed the need for a strong mandate and a good government to lead Singapore through the Covid-19 crisis, pledging that he and other older ministers will see this through with the fourth generation or 4G leadership.
— The Business Times

Covid-19 proposals include independent inquiry and medical board: WP
THE Workers’ Party (WP) said it has put forth seven proposals to deal with the Covid-19 pandemic, in response to Prime Minister Lee Hsien Loong’s online Fullerton rally at noon on Monday.
— The Business Times

Police confirm reports made against DPM Heng over comments at NTU forum, but no offence found
Police reports were made against Deputy Prime Minister Heng Swee Keat over comments he made at a student’s forum at Nanyang Technological University (NTU) last March, the Singapore Police Force (SPF) confirmed on Thursday (Jul 7).
— Channel NewsAsia (very annoying popups)

PAP new face Yip Hon Weng on having 5 kids, no TV & why he is doing improv
Yip candidly shared with us how he got into politics, how it has been for him so far, and other interesting facts about himself.
— Mothership

PM would know about SDP’s Covid-19 comments if he was not so disconnected: Paul Tambyah
OPPOSITION parties have rebutted Prime Minister Lee Hsien Loong’s comments that the opposition has been ignoring the Covid-19 crisis on the campaign trail.
— The Business Times

GE2020: From RSAF search and rescue pilot, to PAP candidate ready to ‘serve from the heart’
If elected as a Member of Parliament, new People’s Action Party (PAP) candidate Poh Li San plans to respond to public scrutiny with her actions.
— Channel NewsAsia (very annoying popups)

GE2020: Day 8 on the campaign trail
SINGAPORE: With just three days to go until Polling Day, candidates are in the final stretch of campaigning as they seek to reach out to voters both on the ground and online.
— Channel NewsAsia (very annoying popups)

Political broadcasts move few but are not without benefits
INTRODUCED in lieu of physical rallies, the constituency political broadcasts that began airing last Friday on national TV, radio and online – on a daily basis until Wednesday – are proving a distant substitute.
— The Business Times

GE2020: Residents must know you are there when they need you, PM Lee advises candidates
Members of Parliament (MPs) looking to build a solid relationship with residents must ensure that they are available when the latter need them, Prime Minister Lee Hsien Loong said on Monday (Jul 6).
— Channel NewsAsia (very annoying popups)

Singapore oil trader ZenRock said to be winding down by August
Troubled Singapore-based oil trader ZenRock has plans to wind down its business, with employees across offices in the city-state and China set to depart by August, according to people with knowledge of the matter.
— Straits Times (annoying popups)

High Court dismisses father’s bid to stop young son from moving back to Britain with his mother
Before moving to Singapore with their young son, a British couple signed a letter stating that if their relationship soured, the mother would return to Britain with the child.
— Straits Times (annoying popups)