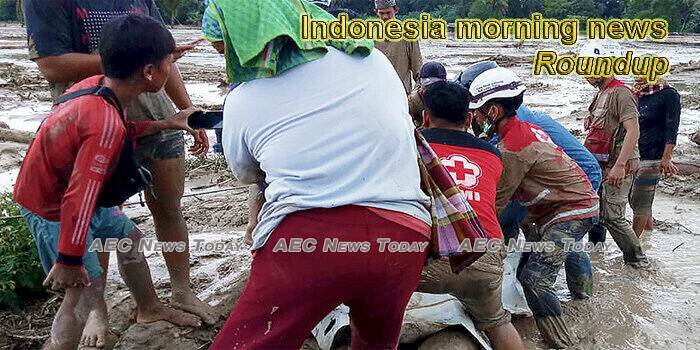 ‘Crisis like no other’ will shrink Indonesia’s economy, IMF forecasts
Indonesia’s economy is on track for a significant contraction this year as the coronavirus crisis has hit the global economy more severely than previously expected, the International Monetary Fund (IMF) has forecast.
— The Jakarta Post

Volunteers for COVID-19 Vaccine Trial Provided with Insurance
The Medicine Faculty of Padjadjaran University ensured that volunteers for the third-phase clinical trial of the COVID-19 vaccine, that was developed in cooperation with China-based pharmaceutical firm Sinovac Biotech, will be provided with insurance.
— Tempo.co

Populist, Anti-Mining District Head in Jember Impeached by Councilors
A female district head known for her charity works and anti-mining stance was impeached by local councilors in East Java on Wednesday in a rare concerted political maneuver involving nearly all members of a district legislative council.
— Jakarta Globe

Indonesia targets Thailand and neighbours
Indonesia’s Ministry of Tourism and Creative Economy/Tourism Agency and Creative Economy will host a travel industry webinar, 23 July, to inform travel agents how to plan for Indonesia’s “New Normal” and assure them of the country’s readiness to welcome tourists once borders open.
— TTR Weekly

Indonesia investment chief questions ASEAN pact as FDI falls
Indonesia needs to reconsider the benefits it gets from being part of the ASEAN Economic Community, the head of the country’s investment board said on Wednesday, after data showed foreign direct investment fell for a second straight quarter.
— Reuters

Why calls for abolishing the death penalty in Indonesia are unrealistic
Indonesian authorities recently announced that Francois Abello Camille, 65, a French national arrested in Jakarta last month for allegedly molesting over 300 underaged girls, could be sentenced to death before a firing squad.
— Today Online

Indonesia FDI Contracts in Q2 as Covid-19 Restrictions Disrupt Projects
Foreign direct investment into Indonesia has dropped 6.9 percent in the second quarter from the same period last year, showing the latest sign of the country’s economic deterioration amid the Covid-19 pandemic.
— Jakarta Globe

Satpol PP Toughens Face Mask Rule as Jakarta Battles COVID-19
The Jakarta Public Order Agency (Satpol PP) on Tuesday commenced an operation meant to discipline people’s use of face masks amidst the COVID-19 crisis as the administration is attempting to ‘flatten the curve.’
— Tempo.co

What, no SIKM? Here’s what you need to travel to and from Jakarta
Airport authorities have stopped asking passengers arriving in the capital city to present their exit and entry permit (SIKM) since July 17, when the Jakarta administration revoked the requirement for both incoming and outgoing travelers and replaced it with the Corona Likelihood Metric (CLM).
— The Jakarta Post

Indonesia Military Says Father and Son Killed in Papua Were Armed Separatists
Indonesia’s military rejected allegations on Wednesday by Papuan separatists that a father and son killed at the weekend in the country’s easternmost province were civilians, insisting the victims were linked to an armed rebel group.
— The New York Times

Bio Farma Explains Stages of Covid-19 Clinical Trials
Bio Farma explained the stages of creating a vaccine. Head of Corporate Communications of Bio Farma, Iwan Setiawan, said that phase three of the clinical trials for making the Covid-19 vaccine aims to ensure the benefits of the vaccine.
— Tempo.co

Indonesia committed to simultaneously handling TB and COVID-19
Indonesia, the world’s largest archipelagic nation, with over 17 thousand islands and a population of some 267 million, is currently not only battling COVID-19 but also other ailments, including dengue fever and tuberculosis (TB).
— Antara News

Expert Suspects Multicenter Clinical Trial in Sinovac Partnership
University of Indonesia epidemiologist Pandu Riono suspects that Indonesia is being a part of a multicenter clinical trial by China’s Sinovac Biotech, which intends to test the effectiveness of the COVID-19 vaccine.
— Tempo.co

Government ensures sufficient nutrient intake for mothers, children
The government will ascertain that pregnant women and those in early childhood receive adequate nutrition to prevent stunting through the disbursement of social aid under the Family Hope Program (PKH) amid the COVID-19 pandemic.
— Antara News

Anies Baswedan: Do Not See COVID-19 Numbers Only
Jakarta Governor Anies Baswedan asked the public not to look at the number of COVID-19 new daily cases only, but also at the novel coronavirus positivity rate or the transmission rate.
— Tempo.co

Pandemic leaves animals abandoned, starving in Bali, West Nusa Tenggara
An animal protection organization, Animals Australia, has reported that the COVID-19 pandemic has put animals in a dire situation, with many of them left starving and abandoned on the streets in Indonesia, especially in Bali and on the Gili Islands of West Nusa Tenggara.
— The Jakarta Post

Govt may disband more agencies to slash red tape
President Joko “Jokowi” Widodo disbanded 18 state agencies on Monday, but this may only be the beginning of a renewed drive to trim down the Indonesian bureaucracy, officials have hinted.
— The Jakarta Post

Crime Statistics, Police Report a Slight Drop in July
The Indonesian National Police (Polri) announced on Wednesday that crimes have slightly dropped by 2.89 percent from the 28th week up to the 29th week of 2020, which falls in July.
— Tempo.co

Mixed families, couples have mixed response to nixed emergency permit
Haida, a 53-year-old resident of Jakarta, said that she was stumped when she learned that her daughter must soon return to Malaysia alone because of the recent revocation of the emergency stay permit (ITKT) and corresponding policies, which came into force on July 13.
— The Jakarta Post

Teachers, activists decry educational disparities exacerbated by outbreak
As four junior high schoolers waded across a fast flowing river on their way to school, they struggled to keep their balance against the force of the current.
— The Jakarta Post

OJK Employee Detained for Alleged Bribery
A senior employee of the Financial Services Authority, or OJK, has been named suspect for allegedly taking bribe from a private bank and put in detention, the Jakarta prosecutors’ office said on Wednesday.
— Jakarta Globe

Light at end of tunnel for auto industry as June car sales rebound: Experts
Indonesia’s automotive industry players can breathe a sigh of relief as national car sales in June rebounded strongly, promising a smoother road for the rest of the year, analysts have said.
— The Jakarta Post

Local community of 10 villages involved in Meru Betiri conservation
The Meru Betiri National Park management in East Java has involved the residents of 10 adjoining villages in its conservation efforts centered on restoring the ecosystem and concurrently boosting the local economy.
— Antara News