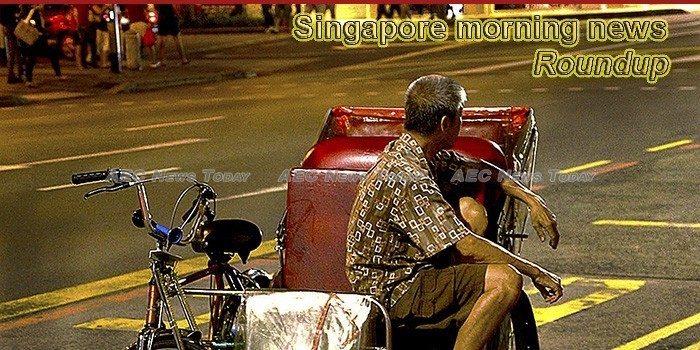 Property marketplace players threatened as DBS comes after their customers
Small startups aiming to get in on the action on Singapore’s profitable e-commerce scene may need to rush as heavyweight banks are increasingly muscling their way into the scene, effectively sealing their dominance across verticals.
— Singapore Business Review

Seniors to pick up fun skills with courses to create ringtones, code apps, make movies
Seniors keen on learning how to create ringtones of their favourite songs, run a blog, or code an app can now sign up for a series of new courses run by the Infocomm Media Development Authority (IMDA) in collaboration with tech giant Apple and the National Library Board.
— TodayOnline

Chart of the Day: NODX reduced to just 40% of Singapore’s GDP in 2018
This chart from Morgan Stanley shows the declining trend in the percentage of non-oil domestic exports (NODX) to Singapore’s gross domestic product (GDP). It crashed to 40% in 2018 from its peak contribution of more than 70% in 2006.
— Singapore Business Review

Singtel, Ericsson to launch 5G pilot network in Q4
Singtel and Ericsson will launch what is touted as Singapore’s first 5G pilot network later this year to support trials of drones and autonomous vehicles.
— Telecomasia.net

More investment dollars, refreshed tech roadmap in the works: S Iswaran
“We must be prepared to do more in R&D because digital technologies will only become more pervasive – and companies and countries around us are already investing heavily in this,” the Minister for Communications and Information says.
— Channel NewsAsia

From building homes to building bridges, 78-year-old is still helping others
For more than 20 years, Li De Yan helped to build Singapore with his bare hands.
— The Straits Times

Trans-Cab taxi bursts into flames along CTE, cabby escapes without serious injury
An elderly taxi driver has been taken to the hospital for chest pains after his Trans-Cab taxi caught fire along the Central Expressway (CTE) on Tuesday (July 24).
— TodayOnline

Commentary: For explosive growth, look to these two models of business
We need to reframe the conversation about SMEs and make sure we’re deploying the right sorts of support and incentives in our economy to help these gazelles grow, says one business observer.
— Channel NewsAsia

SIA’s Q1 profit outlook clouded by rising oil prices
Singapore Airlines (SIA) is releasing its financial statement for the first quarter of financial year 2019 on 26 July. Some analysts are expecting rising oil prices to hit the airline group and persist as a headache for the rest of the year.
— Singapore Business Review

A slow welcome for smart homes in Singapore
As more smart devices enter the market, the concept of a smart home in Singapore is slowly becoming a reality.
— Straits Times

Fighting cancer while pursuing his dreams
As a child, he had always looked up whenever an airplane flew by. Even after he was diagnosed with soft tissue sarcoma, a rare form of cancer, at age 12, Mr B. Kanesh never gave up his dream of taking to the sky.
— The Newpaper

NUS warns students of phishing scam emails from compromised NUS email accounts
A reader has sent the following screenshot of an email sent by the National University of Singapore (NUS) on 16 July.
— The Online Citizen

Woman jailed two weeks for riding bike into elderly woman
A cyclist who knocked down an elderly woman in a market, leaving her with a broken left hip bone, was sentenced to two weeks’ jail yesterday.
— The Newpaper