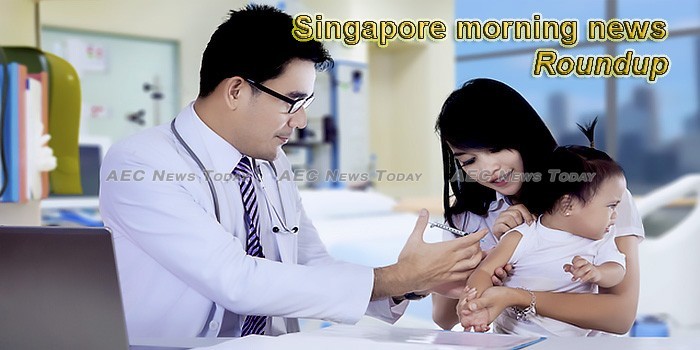 Singapore prepares sweeping law to fight ‘online falsehoods’
Singapore is close to passing a law that could force websites to run government “correction notices” alongside content it deems false, and the new rules are likely to affect how big social media companies like Facebook and Twitter operate in the country.
— CNBC

Government cannot use taxpayers’ money to bail out Hyflux investors: Masagos
Speaking in Parliament on Monday (Apr 1), the Minister for the Environment and Water Resources said that investors in search of returns must understand that returns come with some risk.
— CNA (very annoying popups)

Economists see no further MAS tightening in April
WITH the United States Federal Reserve signalling a pause in interest rate hikes and both domestic growth and core inflation easing, economists expect the Monetary Authority of Singapore (MAS) to also pause at this month’s half-yearly policy review, with no further tightening as yet.
— The Business Times

Singapore: A rapidly changing world requires new policy responses
Two developments make it imperative that we rethink how governments intervene in the economy.
— The Edge Singapore

Joint Ministerial Meeting Puts Australia-Singapore Defense Ties in Focus
The engagement highlighted efforts by both sides to develop the defense aspect of their comprehensive strategic partnership.
— The Diplomat (paywall)

MOH aims to issue legally binding clinical practice guidance for doctors
The guidance could provide more certainty on issues like informed consent and on how healthcare institutions and professionals should handle requests for assistance from patients’ next-of-kin (NOK).
— CNA (very annoying popups)

Singapore home prices fall again as economy, measures bite
Prices of private homes in Singapore edged lower for a second straight quarter led by those in prime areas, strengthening the likelihood of a continued downtrend as sentiment remains weak due to a slowing economy and government measures to cool the market.
— Nikkei Asian Review (paywall)

Singapore Plans Law to Fight False News, but Critics Fear Repression
Singapore introduced draft legislation on Monday that it said would combat false or misleading information on the internet, but critics said the measure could be used as a cudgel against the government’s critics.
— New York Times

Restrictions needed on offensive speech as it creates conditions for discrimination: Shanmugam
There has to be restrictions on offensive speech in public discourse, even when it is not hate speech, as over time it creates an environment “conducive for discrimination and eventually violence”, said Home Affairs and Law Minister K Shanmugam on Monday (Apr 1).
— CNA (very annoying popups)

Singapore offers buffet of attractive yield plays amid the easing policy environment, says UOB
UOB Kay Hian is recommending a wide variety of yield plays offered by Singapore ranging from aviation and banks, to developers and REITs as central banks around the world continue to ease their monetary policies.
— The Edge Singapore

Govt must intervene early before hate speech disrupts racial, religious harmony in S’pore: Shanmugam
Rather than questioning whether the Government should dictate what music Singaporeans can listen to, Singaporeans must accept the broader picture that by allowing hate or offensive speech to go mainstream, the fault lines of race and religion here will grow.
— Today Online

S’pore has own approach to offensive speech
Singapore has carved out its own approach as a secular state in dealing with speech that is offensive to race and religion, said Home Affairs and Law Minister K. Shanmugam yesterday.
— Straits Times (annoying popups)

Many Christians were ‘very concerned and offended’: Shanmugam explains reversal of decision over metal band concert
The authorities had made a “judgement call” in allowing Swedish black metal band Watain’s concert to go on with certain restrictions, but reversed the decision after receiving reports of mainstream Christians “being very concerned and offended”, Home Affairs and Law Minister K Shanmugam said on Monday (April 1).
— Today Online

No small coincidence that SMRT in Czech means death on Google translate
Singapore – The epic translation of SMRT (Singapore Mass Rapid Transit) from Czech to “death” in English has its own thread in Reddit, showing an eerie symbolization to SMRT deaths in 2016.
— The Independent

It was in the ‘public interest’ to reveal criminal history of driver who took PM Lee’s son for a ride: Shanmugam
It was in the public interest for the police to reveal the criminal history of the man who took Mr Li Yipeng, Prime Minister Lee Hsien Loong’s eldest son, for a ride last month, Home Affairs Minister K Shanmugam wrote in his response to a question in Parliament on Monday (Apr 1).
— CNA (very annoying popups)

HDB resale prices dip 0.3% in Q1
Housing Board resale flat prices dipped 0.3 per cent in the first quarter of this year compared with the quarter before, according to the latest HDB flash estimates released yesterday.
— Straits Times (annoying popups)

Singapore uses insects to gobble up food waste
Some insects, armed with voracious appetites as larvae, are being bred in Singapore to eat discarded food, at the same time creating a rich fertilizer for plants.
— Today Online

Facing insolvency with no rescuer in sight, Midas says likely to be liquidated
Midas Holdings, which entered into judicial management and is the target of a police probe after the discovery of financial irregularities in early 2018, warned shareholders the group will likely be liquidated when ordered to by the court.
— The Edge Singapore

MPs voice support for Singapore’s stance in restricting hate speech, offer suggestions to bolster approach
Members of Parliament (MPs) have voiced their support for Singapore’s approach in restricting hate and offensive speech and suggested various ways how hate speech can be curtailed while allowing “robust and meaningful exchange of ideas” to continue.
— CNA (very annoying popups)

In the absence of evidence, PAP repeats use of sophistry to justify its beliefs to Singaporeans
On 28 March (Thursday), Finance Minister Heng Swee Keat made a statement that most Singaporeans might not be ready for an ethnic minority PM.
— The Online Citizen

Start-up launches all-in-one transport app that insures users too
Commuters in Singapore can plan, book and pay for their journeys here across a variety of transport modes with a new app by a local start-up.
— Straits Times (annoying popups)

K. Shanmugam to discuss Government’s approach to hate speech in Parliament
On April 1, Monday, K Shanmugam, the country’s Law and Home Affairs Minister will be making a ministerial statement in Parliament, specifically tackling the restriction on hate speech in order to maintain harmony in a multicultural and multi-religious country such as Singapore.
— The Independent

Shanmugam warns ‘serious consequences can follow’ when countries are lax about hate speech
Delivering a ministerial statement in Parliament on Monday (Apr 1), Mr Shanmugam stressed the importance of Singapore continuing to prohibit hate speech, dealing with it firmly “in the same way it has done before”.
— CNA (very annoying popups)

Mastercard users can tap and ride under new scheme
From Thursday, commuters with Mastercard contactless bank cards will simply be able to tap and go when paying for their fares on buses or trains.
— Straits Times (annoying popups)