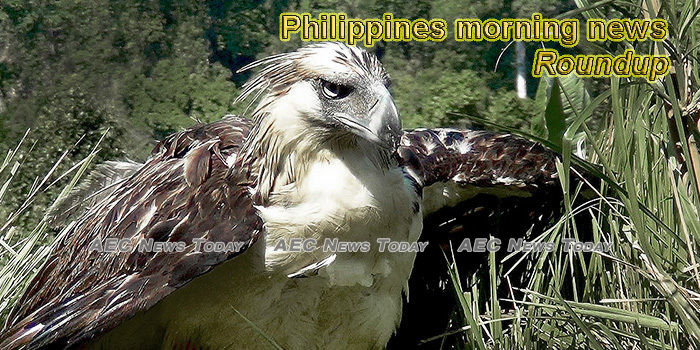 Current suspected nCoV cases in PHL jump to 24, with 18 in NCR; but DOH assures no confirmed case yet
There are at least 27 persons in the country who have been considered “patients under investigation” (PUIs) for the novel coronavirus infection, and three of them so far have been discharged from hospitals after results showed they are negative of the disease, the Department of Health said.
— Eagle News

PHL, South Korea ready P3.87-billion fund to bankroll BBB projects
The Duterte administration’s “Build, Build, Build” (BBB) program has gained another major boost after Manila and Seoul opened a $71-million fund to hasten the rollout listed infrastructure projects, and leave behind P1.4 trillion worth of projects in the pipeline for the next administration.
— Business Mirror

Taal P30-billion funds eyed for dev’t works after downgrade
THE proposed P30-billion supplemental budget to aid those affected by the Taal ashfall will likely be refocused towards development projects for the region after prospects dimmed for an explosive eruption, a key legislator said.
— BusinessWorld

Energy regulator approves reduction in feed-in tariff allowance
THE Energy Regulatory Commission (ERC) said Tuesday that it approved a feed-in tariff allowance (FiT-All) of P0.0495 per kilowatt-hour (kWh), or lower than what was applied for by the government corporation that handles the collected amount from consumers.
— BusinessWorld

Gov’t to firm up proposals on US military deal
A CABINET cluster will meet on Friday to finalize recommendations on a plan to end an agreement with the US on the deployment of troops and equipment for war games, Justice Secretary Menardo I. Guevarra said on Tuesday.
— BusinessWorld

Authorities refute social media post on nCov-infected Thai patient at SPMC
MEDICAL AUTHORITIES have quashed reports shared on social media about a supposed patient from Thailand infected with the novel coronavirus (2019-nCoV) who has been admitted at the Southern Philippines Medical Center (SPMC) in Davao City.
— BusinessWorld

‘No order to ban Chinese from Philippines’
Malacañang sees no need to bar Chinese – even those from Wuhan – from entering the Philippines even as the Bureau of Immigration (BI) has suspended the issuance of visa-upon-arrival (VUA) to Chinese nationals.
— The Philippine Star

Hontiveros sees link between influx of POGO workers, rise of sex trafficking in Manila
Senator Risa Hontiveros on Tuesday, January 28, called on the Bureau of Immigration (BI) to suspend the visa upon arrival privilege for Chinese nationals, saying it is a scheme that has readily assisted the rise of Chinese criminals in the country.
— Rappler

‘Anti-democratic’ to ban dynasties, say lawmakers from political clans
Two congressmen who belong to political dynasties opposed the proposal to include in the Constitution the prohibition on relatives within the second degree of consanguinity to run in the same elections.
— Rappler

Coronavirus watch in Cebu goes down to municipal level
The heightened surveillance against the 2019 new coronavirus (2019-nCoV) in the Province of Cebu will go down to the town level to protect the Cebuanos from the flu-like virus strain, the provincial health officer here on Tuesday said.
— Philippine News Agency

Seoul, Manila to hold 5th round of FTA talks
South Korea said Tuesday it plans to hold the fifth round of talks with the Philippines on a bilateral free trade agreement this week, with a goal of concluding the deal this year.
— The Korea Herald

Lawyer, aide killed in Pampanga ambush
A lawyer and his aide were killed in an ambush by still unidentified gunmen in Barangay San Vicente here on Tuesday.
— Philippine News Agency

NegOr puts up contingency measures amid 2019-nCoV scare
The provincial government of Negros Oriental, through the Provincial Health Office (PHO), is putting in place contingency measures to prevent the entry of the novel coronavirus (2019-nCoV) and handle it in case it reaches the province.
— Philippine News Agency

PETA calls for inclusion of animals in rescue missions
Animal welfare group People for the Ethical Treatment of Animals (PETA) Asia on Tuesday called on lawmakers and authorities involved in rescue missions during times of calamity to make space for animals instead of abandoning them in dangerous conditions.
— GMA Network

BSP adopts new pricing for rediscounting loans
The Bangko Sentral ng Pilipinas (BSP) has adopted a new pricing structure for its rediscounting facility in response to changes in monetary management or economic conditions.
— The Philippine Star

Negrense animal raisers avail of P5-M agri fund
A total of 14 animal raisers in Negros Occidental have availed of a PHP5-million loan assistance from the Agricultural Competitiveness Enhancement Fund (ACEF) of the Department of Agriculture (DA).
— Philippine News Agency

House body defers Cha-Cha report
A HOUSE body has deferred a committee report on proposed changes to the 1987 Constitution as it considers other proposals on federalism.
— BusinessWorld

Drop in corruption index motivation for PH to improve: PCOO
Communications Secretary Martin Andanar on Tuesday said the Philippines’ lower ranking in the Corruption Perceptions Index (CPI) last year will serve as a motivation for the government to “improve” in its efforts to curb corruption.
— Philippine News Agency

Malversation raps dismissed vs. ex-DA officials over P4.9-M fund transfer sans docs
The Sandiganbayan has dismissed malversation of public funds charges against former Department of Agriculture officials in connection with the transfer of P4.9 million in public funds to private suppliers without public bidding due to lack of evidence.
— GMA Network

Keep your banknotes, coins clean – BSP
The Bangko Sentral ng Pilipinas (BSP) in Ilocos Norte is urging the public to refrain from defacing and ruining the country’s currency as they intensify its campaign for Clean Note and Coin Policy (CNCP).
— Philippine Information Agency

Sandigan orders JPE to sign pre-trial order on plunder, graft cases
The Sandiganbayan Third Division ordered former Senator Juan Ponce Enrile to personally appear before the anti-graft court to sign the pre-trial order which would determine the course of his trial in connection with the P172 million plunder case leveled against him from the P10 billion pork barrel scam.
— GMA Network

PDEA names 3 Naga City barangays as drug-cleared
The Philippine Drug Enforcement Agency (PDEA) declared three (3) barangays of this city as drug-cleared after passing the 14 parameters or conditions under Section 8 of the Dangerous Drugs Board Resolution No. 3, Series of 2017.
— Philippine Information Agency

Philippine Navy mints first female commodore
For the first time in history, the Philippine Navy promoted a woman to the rank of commodore – equivalent to the one-star rank of brigadier general in the Army, Air Force, and the Marines.
— Rappler

Bohol spurs farmers to keep ube industry alive with annual festival
BOHOL — popular for its chocolate hills, tarsier, beaches, and peanut kisses — is celebrating the Ubi Festival this week in honor of the province’s inconspicuous high-value crop, the yam.
— BusinessWorld

Guv’s ‘hitman’, wife shot dead in NegOr town
An alleged hitman implicated in a reported plot to kill Negros Oriental Governor Roel Degamo and in the failed assassination try on a lawyer-councilor in Bayawan City several years ago was shot dead, along with his wife, by unidentified gunmen in that southern city over the weekend.
— Philippine News Agency

Supreme Court approves domestic adoption process for American couple
The Supreme Court (SC) sided with an American couple living in the Philippines in a years-long court procedure to legally adopt their 7-year-old daughter who has been in their custody and care since she was one year old.
— Rappler