By Stella-maris Ewudolu on September 4, 2019 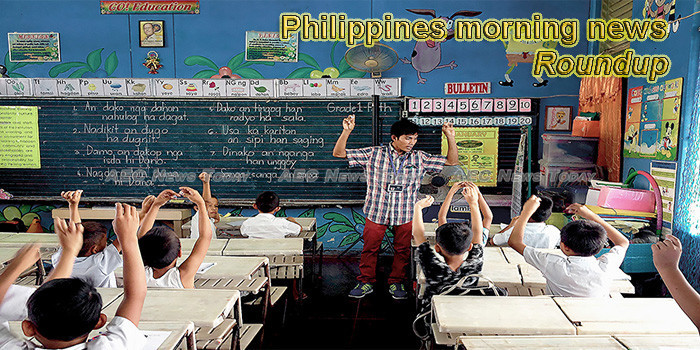 ‘Catch-up’ program to boost GDP growth
Finance Undersecretary Gil Beltran said the government’s implementation of a “catch-up program” following a sluggish 5.6-percent gross domestic product expansion in the first half will boost economic growth for the rest of the year.
— Manilastandard.net

Measles claim 16 lives in Davao Region
A total of 16 deaths from the 1,299 cases of Measles and Rubella in Region 11 have been recorded by the Department of Health in Davao Region (DOH 11) from January to September 2 this year, a health official said on Tuesday.
— Philippine News Agency

‘PH can’t have its Kalayaan Island Group’ – arbitral tribunal
IN the second case* where we shot ourselves in the foot in the arbitration case against China brought by President Benigno Aquino 3rd and his Foreign secretary Albert del Rosario, the tribunal in effect ruled that we can’t have our Kalayaan Island Group (KIG), since this would violate provisions of the United Nations Convention of the Law of the Sea (Unclos).
— The Manila Times

‘Reinstating slashed budgets to cost P90 billion’
THE chairman of the House Committee on Appropriations said on Tuesday the lower chamber will not accommodate in the 2020 national budget the requests of lawmakers whose districts’ budgets were slashed and vetoed in this year’s General Appropriations Act.
— Business Mirror

July M3 grows 6.7% on demand for credit
THE growth of cash circulating in the local economy ticked slightly faster in July this year, but was still in the low single-digit pace during the month.
— Business Mirror

Philippine bucks downturn in Asean factory activity in Aug
Despite a modest improvement in manufacturing conditions in August, the Philippines led the recovery in business conditions in the ASEAN region during the month, according to the IHS Markit ASEAN Manufacturing Purchasing Managers’ Index (PMI).
— The Philippine Star

Slave to sachets: How poverty worsens the plastics crisis in the Philippines
Armed with gloves, rubber boots and a rake, “Mangrove Warrior” Willer Gualva, 68, comes to Freedom Island in the Philippines almost every day to stop it being engulfed by trash.
— CNA

Government debt seen rising to P8T by end-2020
THE national government’s outstanding debt is projected to breach the P8-trillion mark by end-2020, Department of Budget and Management (DBM) data showed on Tuesday.
— The Manila Times

Panelo to file libel charges versus Rappler, Inquirer.net
Presidential Spokesperson Sal Panelo said he will file libel and cyber libel complaints against two online news publications for their stories about his referral of the request of rape-slay convict Antonio Sanchez for executive clemency
— CNN Philippines

Court junks lawsuit for protection of disputed shoals
THE Supreme Court has rejected a plea from fishermen and a lawyer’s group to force the government to protect three disputed shoals in the South China Sea.
— BusinessWorld Online

SC affirms dismissal of reckless imprudence resulting in homicide raps vs Aquino, others over Mamasapano
The Supreme Court has affirmed the Ombudsman’s dismissal of the charges for reckless imprudence resulting in homicide against former President Benigno Aquino III and two others over the Mamasapano incident in 2015.
— Eagle News

1,914 convicts released due to GCTA should be re-arrested – Drilon
Senate Minority Leader Franklin Drilon on Tuesday urged the Justice Department to petition the courts for the re-arrest of 1,914 heinous crime convicts, including the three convicted for the rape-slay of the Chiong sisters in 1997, released due to the Good Conduct Time Allowance (GCTA) law.
— GMA News

SBMA approves P5.03-billion investments in H1 2019
Close to a hundred investment projects worth more than P5 billion were approved by the Subic Bay Metropolitan Authority (SBMA) in the first half of the year, as fresh infusions in leisure, logistics and general business sectors buoyed the business outlook in this growing trade hub.
— Business Mirror

DA to impose measures vs. pest-packed imported rice
The Department of Agriculture (DA) will impose sanitary and phytosanitary (SPS) measures against imported rice as imports have ballooned to 2.2 million metric tons (MT) to have found to be “bukbok-packed” (pests).
— Philippine News Agency

Duterte spokesman ‘referred’ ex-mayor’s plea for parole
PRESIDENT RODRIGO ROA Duterte’s spokesman referred the application of a convicted former mayor for executive clemency, according to the chief of the countrys’ parole board.
— BusinessWorld Online

Digital disruption to weigh heavy on PH’s IT-BPM industry – IBPAP
The IT business process management (IT-BPM) industry, the country’s second largest dollar earner, is recalibrating the 2022 Roadmap to validate whether the 8-9 percent growth target would still hold given the continuing uncertainty and threats of digital disruption that requires companies to prepare their talents to stay relevant.
— Manila Bulletin

Manila banks on Beijing to expand manufacturing base–DTI chief
Figures may be dissuading, but the country’s trade chief is banking on China to deliver huge sums of capital to the Philippines that should expand its manufacturing base.
— Business Mirror

Factories seen to face challenges
BUSINESS CONDITIONS for manufacturers in the Philippines can be expected to continue “modest” improvement in the face of an escalating Sino-US trade war that weighs on global growth prospects, a Cabinet official and private sector economists said on Tuesday.
— BusinessWorld Online

NegOr task force to lead village ‘Dagyawan’ on insurgency
The Negros Oriental Task Force to End Local Communist Armed Conflict (NOTF-ELCAC) in cooperation with the Office of the Presidential Assistant for the Visayas (OPAV) will spearhead a two-day activity in Barangay Trinidad in Guihulngan, Negros Oriental next week.
— Philippine News Agency

Rise of digital payments in PH ‘very encouraging’: BSP
Digital payment transactions in the Philippines, which is targeted to hit about 20 percent of total transactions by 2020, is increasing in line with the bid of the Bangko Sentral ng Pilipinas (BSP).
— Philippine News Agency

Officials who released heinous crime convicts should be sued – solon
Officials who were involved in the release of 2,160 heinous crimes convicts based on the law on good conduct time allowance (GCTA) should be criminally and administratively sued, PBA party-list Representative Jericho Nograles urged on Tuesday.
— GMA News

NCRPO drafts security plan for SEAG
This early, the National Capital Region Police Office (NCRPO) is now drafting security plans for athletes and venues of some of the Southeast Asian Games (SEAG) sports that would be held in Metro Manila.
— Tempo

Comelec asked to disqualify Duterte Youth from party list
The legal troubles of the embattled Duterte Youth are not over after a fresh petition is filed seeking to cancel its registration as a youth sectoral party.
— Rappler

Expert says more children born out of wedlock in PH
Legal and societal disadvantages of illegitimate children have not discouraged unmarried couples from creating them, a family law expert told members of the Supreme Court (SC).
— Inquirer.net

Vietnam morning news for May 29