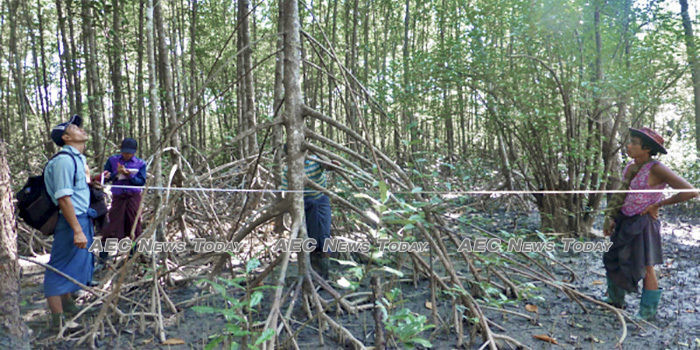 A new study by the National University of Singapore (NUS) has found that mangrove deforestation in Myanmar is taking place at a faster rate than previously estimated.

The NUS study, led by Edward Webb and Jose Don De Alban and published online in Environmental Research Letters on March 3, found that between 1996 – 2016 more than 60 per cent of all mangroves in Myanmar had been permanently or temporarily converted to other uses, including the growing of rice, oil palm, and rubber, as well as for urbanisation.

Mangroves slow down climate change by sequestering carbon, and also conserve biodiversity, improve food and nutrition security and support human well-being, according to the International Institute for Sustainable Development(IISD).

The institute says sustainable management of mangroves can help achieve the 2030 Agenda for Sustainable Development of the United Nations (UN).

“The main importance of this research is that we calculated much greater levels of deforestation than previous studies”, said Mr Webb, an associate professor at the NUS.

“It is quite incredible to consider that nearly two-thirds of all mangroves in Myanmar were deforested over a 20-year-period.

“Our work signals an important decline in coastal mangroves in Myanmar, which has important implications for coastal protection, biodiversity conservation, and the livelihoods of inhabitants dependent on mangroves.

“Loss of mangroves equates to loss of habitat available for mangrove-dependent wildlife which may include birds, mammals, fish and crustaceans, as well as crocodiles”, Mr Webb said, noting that “perhaps, as important are the implications for other ecosystem services associated with mangroves, including shoreline protection and carbon sequestration”.

“Southern Myanmar’s extensive mangroves are exceedingly diverse, with mangrove species from both the Sundaic and Indo-Chinese bioregions, making that ecosystem unique.”

A call to action

According to Mr Grindley, the new study is an important call to action. “Fortunately, the government realises the urgency of the situation, and donors such as the Denmark government are pledging new funds to help with mangrove restoration. Nonetheless, protecting the remaining natural mangroves is much more urgent – replacing a forest always is more difficult and costlier than saving one”.

One feature of the study is its highlighting of the value of multi-sensor satellite data for national-level mangrove change assessments, along with gross land cover transition analyses, to assess landscape dynamics and develop strategies to conserve important habitats.

The study relies on satellite images and multiple analytical tools to assess the extent of mangroves in 1996 and the losses thereafter.

Although mangroves account for only 0.7 per cent of the Earth’s tropical forest area, they are among the world’s most productive and important ecosystems as they serve as nursery habitats for fish species, offering protection against coastal surges associated with storms and tsunamis.

Mr Webb notes that in the past the Myanmar government facilitated rice expansion into mangroves through assistance with land preparation, irrigation, and agricultural extension services. “Such policies were incompatible with mangrove conservation”, he said.

Other than farmers, there are large corporations that are involved in mangrove clearing.

According to Mr Webb, “they need to be held accountable through policy and oversight instruments so that expansion of large plantations such as oil palm are not at the expense of mangroves.

This article was written by Claudia Caruana, a New York-based writer specialising in health writing in the developing world, medicine, and environmental issues. It first appeared on SciDev.Net’s Asia under a Creative Commons License and is produced here with its permission.