Myanmar morning news for May 19 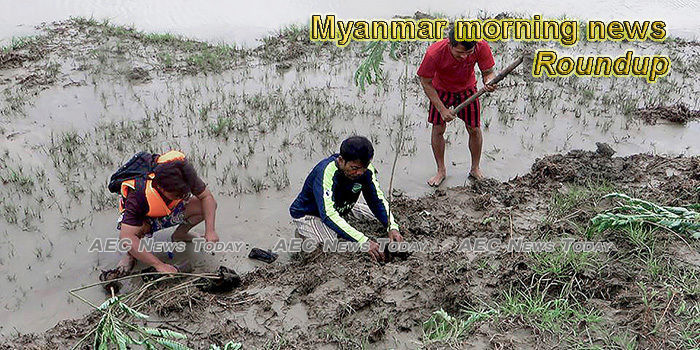 COVID-19 cases in Myanmar stand at 188 on 18 May 2020
The Ministry of Health and Sports released an update report of COVID-19 in Myanmar yesterday, with 4 new cases and national tally reaching 188.
— The Global New Light of Myanmar

Rubber export income down about $30 mln in seven months (Oct-Apr)
Myanmar has exported 114,000 tonnes of rubber worth over US$140 million as of April-end in the current financial year since 1 October 2019, which shows a decrease of about $30 million compared with the corresponding period of the previous fiscal, the Ministry of Commerce’s data showed.
— The Global New Light of Myanmar

‘All my dreams are shattered’: coronavirus crushes Asia’s garment industry
Zarchi Lwin pawned her only two gold bangles for $140 when the owner of the Myanmar factory where she sewed winter coats for British retailer Next Plc shut it down after orders dried up due to the coronavirus.
— Reuters

Myanmar Ethnic Armed Group Seizes $1.28 Million in Meth From Smugglers After Firefight
The United Wa State Army in Myanmar’s Shan state seized drugs after a firefight with drug smugglers last week, UWSA said on Monday as the UN praised a two-month operation in which the country’s police and military seized a record amount of methamphetamine and other drugs in the state.
— Radio Free Asia

Reasons for optimism in Myanmar’s coronavirus fight
Despite ominous predictions, there are few signs of a disastrous spread of COVID-19, while the capacity to control and treat the disease is increasing with each day.
— Frontier Myanmar

CVC Capital, Guodong in race for Myanmar’s Irrawaddy Green Towers stake
Private equity firm CVC Capital Partners and Chinese wireless infrastructure company Guodong Group are among shortlisted bidders for Myanmar’s biggest telecommunications tower company, in a deal worth as much as $800 million, according to people with knowledge of the matter.
— DealStreetAsia

Myanmar to invite tenders for solar power: MOEE
The Ministry of Electricity and Energy (MOEE) will invite local and foreign investors to tender for a solar power plant project, said U Soe Myint, Deputy Permanent Secretary at the ministry.
— Myanmar Times

K1.2 billion in drugs seized in Myanmar’s Shan State
Police seized illegal drugs and weapons worth K1.2 billion (US$854,329) during a raid in Muse town in Stan State.
— Myanmar Times

Govt to disinfect all schools used for quarantine in Myanmar
The government ordered all schools used as quarantine facilities to be closed and returned to the Ministry of Education no later than June 16, in preparation for the beginning of the school year.
— Myanmar Times

Myanmar seamen to have coronavirus-free certificate arrangement
The Myanmar Seamen’s Federation (MSF) and the National Health Laboratory (NHL) under the Ministry of Health and Sports are arranging to give out health certificates recommending that the seafarers are free of COVID-19.
— Myanmar Times

COVID-19 cases rise to 187 in Myanmar
The total number of COVID-19 cases in Myanmar has risen to 187, with three more confirmed cases reported on Monday, according to a release from the Ministry of Health and Sports.
— Xinhua

More migrant workers return from Thailand
A total of 90 Myanmar migrant workers returned through the Friendship Bridge No 2 in Myawaddy on 17 May, the 17th consecutive day since the government resumed accepting returnees on 1 May amidst the spread of COVID-19, state media reported.
— Mizzima

Huge fentanyl haul seized in Myanmar as Asian gangs shift to opioids
Myanmar police say they have seized a huge haul of liquid fentanyl, the first time one of the dangerous synthetic opioids that have ravaged North America has been found in Asia’s Golden Triangle drug-producing region.
— FMT

Beijing urges citizens to take precautions, asks Myanmar to tackle crimes against Chinese
China has urged the Myanmar authorities to tackle a spate of crimes apparently directed against Chinese nationals after the death of a prominent businessman who was attacked in Yangon in broad daylight last week.
— Myanmar Times

Myanmar to Introduce Tougher Law to Control Communicable Diseases
Parliament is set to debate a new law on communicable disease control that will create a central committee to tackle outbreaks and boost punishments for violators.
— Irrawaddy

Tour operators for Chinese visitors discuss better services in post-COVID-19
Union Minister for Hotels and Tourism U Ohn Maung held a video conference with Chinese tour operators based in Yangon Region and Mandalay Region from his office in Nay Pyi Taw yesterday.
— The Global New Light of Myanmar

Fourth-Year Performances of Mandalay Region Government
“Tampawaddy” is the name of Mandalay during Myanmar Kings, and that the scholars have accepted the land as the birthplace of the patriots, loyalists and nationalists.
— The Global New Light of Myanmar

Huge fentanyl haul seized in Golden Triangle as Asian crime gangs shift to opioids
Myanmar police say they have seized a huge haul of liquid fentanyl, the first time one of the dangerous synthetic opioids that have ravaged North America has been found in Asia’s Golden Triangle drug-producing region.
— CNA