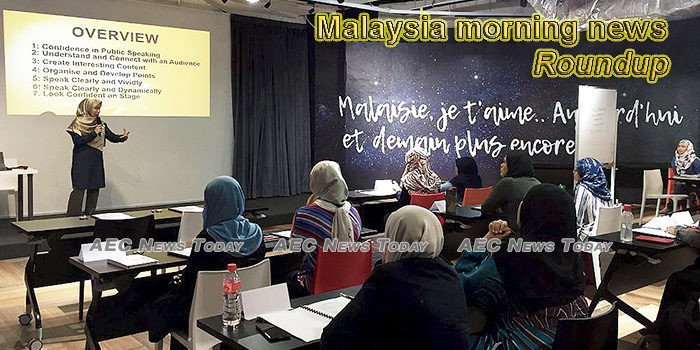 Malaysia returns plastic waste to 13 countries
Malaysia has sent back 150 containers of plastic waste to 13 mainly rich countries since the third quarter last year, with the environment minster warning on Monday that those who want to make the country a rubbish bin of the world can “dream on.”
— Columbian

Indonesia calls out Malaysia for ‘ineffective’ security
The government has lambasted the “ineffective coordination” of Malaysian authorities following the abduction of five Indonesian fishermen last week in waters off Sabah, the latest incident to underscore the lack of security in the tri-border area between Malaysia, Indonesia and the Philippines.
— The Jakarta post

Malaysia wields anti-terrorism laws to fight wildlife poaching
Malaysia is stepping up the fight to protect its critically-endangered wildlife by using tough anti-terrorism and money-laundering laws against poachers.
— The Straits Times

Malaysia plans to do more to protect our coral reefs and marine life
Malaysia has an extensive coastline of 4,675km in total and is hemmed in on all sides by seas – the Straits of Malacca, the Sulu Sea, the South China Sea and the Andaman Sea. And all these waters are located within the Coral Triangle, a rich marine ecosystem with nearly 600 species of corals and more than 2,000 species of fish.
— The Star Online

Malaysia Promotes Cashless Society With eWallet Incentive Award
As Malaysia moves towards a cashless society, the government is offering an award payment of RM30 (about $7.37) under its e-Tunai Rakyat (people’s e-cash) program, according to reports on Friday (Jan. 17).
— Pymnts

Miti aims for 450 SMEs to undergo RA this year
The Ministry of International Trade and Industry (MITI) is targeting 450 small and medium enterprises (SMEs) to undergo the government-funded National Policy on Industry 4.0 (Industry4WRD) Readiness Assessment (RA) programme this year.
— The Sun Daily

Telcos working hand in hand to ensure successful 5G rollout
Malaysia’s telecommunications companies are ramping up efforts, investments and collaborations to support the 5G rollout in the country.
— The Sun Daily

MOH collecting data on patients with Influenza A: Dr Dzulkefly
In an effort to identify the total number of people with Influenza A (H1N1) across the country thus far, data from all facilities under the Ministry of Health (MOH) and related parties are being collected.
— The Sun Daily

Emergency evacuation at school as another round of severe floods hit remote northern S’wak
Floods in SK Benawa in Baram district in interior northern Sarawak have forced students and staff members to be evacuated on Tuesday (Jan 21) morning.
— The Star Online

Ahmad Maslan charged with failing to declare RM2m received from Najib to IRB
Pontian Member of Parliament Datuk Seri Ahmad Maslan (pix) was charged in the sessions court here today with failing to declare RM2 million which he received from Datuk Seri Najib Abdul Razak to the Inland Revenue Board (IRB) and to giving false statements to the Malaysian Anti-Corruption Commission (MACC).
— The Sun Daily

Malaysia’s Islamic schools need help
Last week, Malaysian media reported that the country’s finance minister, Lim Guan Eng had handed over an allocation of RM100 million (US$24,646,124) to the minister in the Prime Minister’s Department, Mujahid Yusof Rawa for the purpose of upgrading and maintaining registered Islamic schools.
— The Asean Post

After PLUS, Khazanah now has to decide on Malaysia Airlines
Just when it is about to close the chapter on the stake sale in PLUS Malaysia Bhd, Khazanah Nasional Bhd has drawn its attention to the ailing national carrier, Malaysia Airlines Bhd in which it injected RM800 million, if not more, last year.
— The Edge Markets

Save water in hot and dry weather: MetMalaysia
Based on the latest monitoring by the Malaysian Meteorological Department, drought has already started in northern Kedah and Perlis with some areas not receiving rain for several weeks, said its director-general, Jailan Simon.
— The Sun Daily

Maybank, UUM collaborate to shape leaders of tomorrow
Maybank and Universiti Utara Malaysia (UUM) have signed a Memorandum of Understanding (MoU) for a strategic partnership between industry and academia in developing the leaders of tomorrow.
— The Borneo Post

NOT READY to go cashless
Sarawak Bus Transport Company Association is appealing to the Transport Ministry to allow bus operators in Sarawak to implement the cashless payment system in the near future, and not now.
— New Sarawak Tribune

Woman among three suspected traffickers held, drugs worth RM948,000 seized
Two men and a woman were arrested on suspicion of trafficking in amphetamine and syabu worth RM948,000 in raids in Setiawangsa and Cheras, here, last Monday.
— The Sun Daily

KL shares end lower due to losses in heavyweights
Bursa Malaysia ended lower today in line with regional markets, as losses in selected heavyweights continued to weigh on the local index.
— The Sun Daily

Malaysia govt starts free meal programme for poor with 4,000 students
About 4,000 students from 100 schools across Malaysia on Monday (Jan 20) were given free meals before the beginning of classes, part of a government programme to help poor students who could not afford a proper meal at home.
— The Straits Times