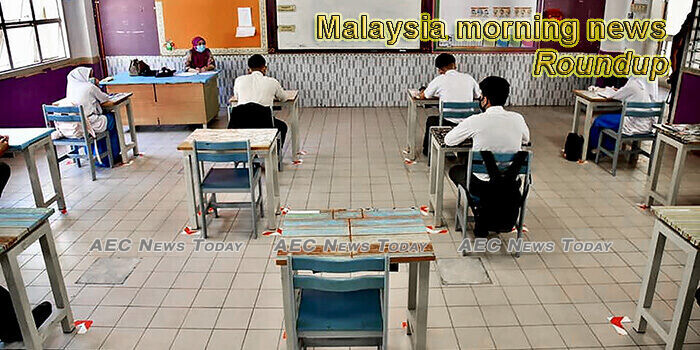 Arrest Warrant Issued For Jho Low’s Royal Kuwaiti Business Partner
Kuwait has been rocked tonight by an announcement from the Home Ministry that an arrest warrant has been issued for one of the kingdom’s most prominent and powerful royal sheikhs, Sabah Jaber Al-Mubarak Al-Sabah (Sheikh Sabah).
— Sarawak Report

Malaysia’s 2020 census to be conducted online
While the Covid-19 pandemic continues wreaking havoc across the globe, disrupting various public and private sector activities, the first phase of implementation for the Malaysian Population and Housing Census 2020 (Census 2020) exercise will be conducted online via a technology-friendly e-Census method.
— OpenGovAsia

Covid-19: Employers must prioritise Malaysian job seekers, says HR minister
The government is committed to ensuring that local job seekers including graduates continue to be absorbed into the country’s employment sector in the areas that best fit their qualifications.
— Malay Mail

Arrests Over 1MDB Threaten To Open A Kuwaiti Can of Worms
Warrants issued last night duly resulted in the arrest today of one of of Kuwait’s most prominent royal sheikhs, Sabah Jaber Al-Mubarak Al-Sabah (Sheikh Sabah).
— Sarawak Report

After ordered to pay US$22m to Malaysian contractor WZR, Maldives state firm seeks to continue contract
A company owned by the Maldives government intends to work out a way to proceed with a US$155 million (RM661 million) contract with Malaysian property developer WZR Property Sdn Bhd, having been ordered to pay US$22 million.
— Malay Mail

Locked in settlement talks with Goldman Sachs, Tengku Zafrul says 1MDB case important, but not as crucial as economic recovery
While Malaysia’s economic recovery has taken the front seat amid the Covid-19 pandemic, the country is still pursuing compensation from investment bank Goldman Sachs in the range of US$2 billion to US$7.5 billion as.
— Malay Mail

Single mother in Penang cheated of RM40,450 by love scam syndicate, say cops
A single mother lost RM40,450 after being smitten by the sweet words of her so-called lover whom she had befriended via social media.
— Malay Mail

Report: Azhar Harun resigns as EC chairman
The Election Commission (EC) has confirmed that Datuk Azhar Azizan @ Harun has tendered his resignation as its chairman on June 29, a news report said.
— The Borneo Post

Sarawak wants special committee on citizenship be revived
Sarawak will propose to the Home Ministry to revive the Special Committee on Citizenship to resolve the issue of stateless or undocumented children.
— Malay Mail

Encourage commercial durian farming to boost economy – Huazong
Huazong president Tan Sri T.C Goh has called on the government to open up agriculture lands to encourage the people to venture into durian farming, as one way of boosting exports to earn more foreign revenues, and to stimulate the economy of Malaysia.
— The Borneo Post

Phone scam: Nine arrested in case of elderly woman who lost RM3.83mil
Investigations into a phone scam that led to a victim losing RM3.83mil has led to nine arrests.
— The Star Online

Covid-19: Sarawak now a green zone, says deputy CM
The whole of Sarawak is now a green zone as the number of Covid-19-positive cases is less than 10. Deputy Chief Minister, Datuk Amar Douglas Uggah Embas said the state’s status changed to green when Kuching, the only district.
— Malay Mail

Covid-19: Foreign migrants endorse Malaysian hospitals for good treatment
“Everything is good. The doctor is good, Everything is okay,” shared Wajid Ali, a Pakistani who received Covid-19 treatment here.
— The Borneo Post