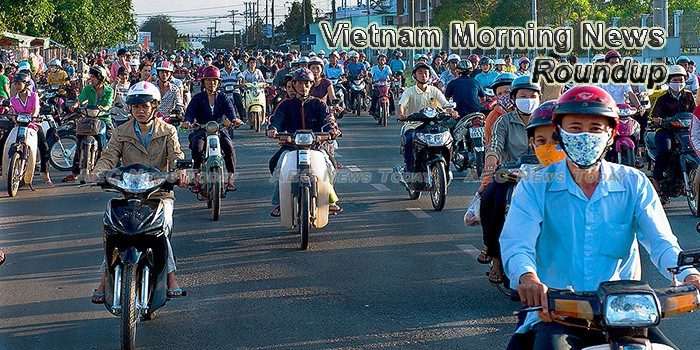 New petrol import tax benefits people
Normally, the ministry announced the petrol basis price and the import tax based on weighted average of the tariffs at the first month of every quarter.
— VietnamNet Bridge

Vietnam’s neighbours, ASEAN, targeted by hackers:
A hacking group previously linked to the Vietnamese government or working on its behalf has broken into the computers of neighbouring countries as well as a grouping of Southeast Asian nations, according to cybersecurity company Volexity.
— Channel NewsAsia

VINACAPITAL VIETNAM OPPORTUNITY: Investment trust looking to profit from the jewel in the crown of frontier markets
It is more than 50 years since the start of the Vietnam War when the north of the country was pitted against the south.
— Mail Online

Đồng Nai’s FDI attraction surpasses annual target
The attraction of foreign direct investment (FDI) in the southern province of Đồng Nai has, so far, this year surpassed the US$1 billion target set for the entire 2017.
— Viet Nam News

Japan a long-term partner of Vietnam: President
The President expressed his delight over the strong, comprehensive and substantial development of the intensive strategic partnership in various fields.
— VietnamNet Bridge

Potential Sabeco bidder Fraser and Neave says Vinamilk valuation is benchmark
A potential bidder for Saigon Beer Alcohol Beverage Corp. says Vietnam’s biggest brewer is too expensive at its current share price and the valuation of the nation’s largest consumer company should be the benchmark.
— DealStreetAsia

Mineral sector posts low growth rate
The growth rate of the mineral exploitation sector in the first 10 months of the year posted a decline of 7.4 per cent from the same period last year.
— Viet Nam News

450 firms to attend Vietbuild 2017
Nearly 1,500 booths of 450 firms in real estate, exterior-interior decoration, construction and building materials will be set up during the Viet Nam International Construction Exhibition (Vietbuild) 2017.
— Bizhub

Typical Vietnamese products introduced to APEC 2017 delegates
The Vietnam Chamber of Commerce and Industry (VCCI) is organising an exhibition in the central city of Da Nang to introduce typical products of all 63 cities and provinces across Vietnam to delegates from 21 APEC member economies.
— VietnamPlus

Bitcoin regulation headaches reemerge in Vietnam
The question Bitcoin regulation is back on the table in Vietnam after a private university announced plans to accept tuition payments in the cryptocurrency despite the central bank reiterating its position that the digital currency is outlawed in the country.
— Tuoi Tre