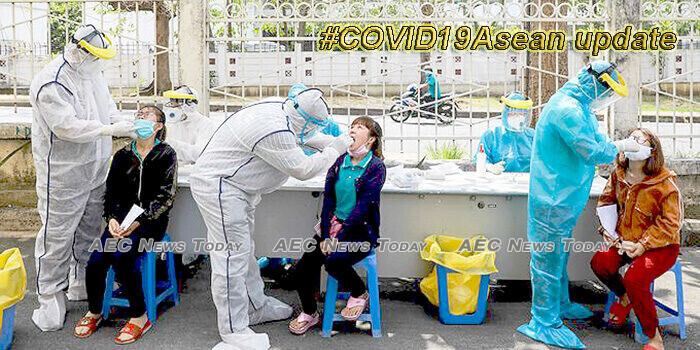 Indonesia continued to record the most number of COVID-19 deaths in Asean yesterday with 68, taking COVID-19 related fatalities there to 3,309, while 1,268 new infections pushed the active caseload to 32,132, on the back of 866 people being declared as recovered.

In the Philippines six fatalities yesterday saw COVID-19 deaths there rise to 1,309, while 1,540 new cases  pushed the active caseload to 34,178, of which 166 are regarded as serious or critical. Following treatment 201 people were declared as recovered.

In Singapore the number of active COVID-19 cases continued to ease on the back of 157 new cases and 285** discharges to 4,112**, with one patient said to be serious or critical.

There were no reports of changes in Brunei, Cambodia, Lao PDR, Myanmar, or Thailand.

Since the first Asean case of COVID-19 was identified in Thailand on January 12 there has been 172,094 confirmed cases recorded in Asean member countries with 96,601 people, or about 56.13 per cent of all Asean infections, having been treated and discharged.

In the past 24-hours the number of COVID-19 ‘survivors’ throughout Asean increased 1.43 per cent DoD, while deaths increased 1.55 per cent.

There has been 4,832 deaths attributed to COVID-19 in Asean member countries, representing a case mortality rate (CMR) based on completed cases (number of discharged + number of dead) of 4.76 per cent. Based on the total number of Asean infections the regional CMR is 2.81 per cent.

As of today, July 8 some 41.06 per cent of all confirmed COVID-19 infections throughout Asean remain active.

Global COVID-19 cases up to July 8

According to the Worldometers tally, China yesterday reported eight new cases, however, these had been filed after the close-off for July 6 and represent July 6 figures.

In late filings after the close for July 7 China added seven new cases to see the active caseload dip to 390, with 78,548 reported recoveries and 4,634 deaths. There has been 83,572 COVID-19 cases recorded in China.

According to the Worldometers tally Mexico yesterday recorded the third most number of deaths globally, with 480. However, these were filed after the close for July 6.

In late filings after the close for July 7 and ahead of the international dateline, Mexico reported 895 deaths and 6,258 new cases for July 8.

The next most number of infections recorded in the previous 24-hours were in South Africa, Russia, Colombia, Peru, Saudi Arabia, and Bangladesh, who reported between 3,027 and 10,134 new cases each.

In the past seven days COVID-19 related illnesses have been blamed for the deaths of 32,249 people.

Global COVID-19 overview up to July 8

COVID-19: Into the abyss as global recession looms (video)