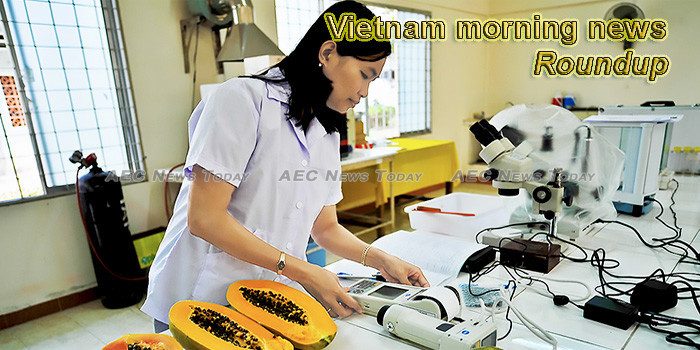 Key Steps To Expanding Your Business in Vietnam
Over the last few years, Vietnam has become one of the top places for business expansion and investment among international investors and exporters alike for all the right reasons.
— Vietnam Insider

Vietnamese firm makes steel products in Thilawa
With Myanmar rapidly opening up to development, steel is becoming increasingly important to various industries in the country. Steel structures can be seen springing up across Yangon. As such, a Vietnamese steel importer is operating a manufacturing unit in Myanmar.
— Myanmar Times

Vietnam ready to seize new opportunities
The year 2018 has ended already, with comprehensive successes seen in all aspects, but there is no room for complacency. Instead, Vietnam needs to grasp every opportunity in order to accelerate economic growth and achieve better and more sustainable results in 2019.
— Nhan Dan Online

Top legislator visits Vietcombank, customs sector after Tet
Chairwoman of the National Assembly Nguyen Thi Kim Ngan recognised the outstanding performance of Vietcombank in 2018 and wished the bank more success in the Year of the Pig during her visit to the bank on February 11, the first working day after the 9-day Lunar New Year (Tet) holiday.
— Nhan Dan Online

VN support industries striving to improve
Vietnamese enterprises have the potential to participate in regional and global production value chains on par with the leading countries in ASEAN, because Viet Nam has been a top priority choice of multinational corporations.
— Bizhub

Experts upbeat about MA scene in 2019
Experts have predicted a banner year for merger and acquisition (M&A) activities in 2019 thanks to recent positive developments.
— Bizhub

Moody’s key cross-sector research on the credit risks and trends that will shape 2019
Moody’s CreditView provides global and regional insights on what trends and risks will shape the year ahead. To help you start the new year well-informed, Moody’s has compiled a selection of key forward-looking cross-sector research.
— Vietnam Insider

Vietnam Life Insurance Market Trends And Opportunities To 2021: Ken Research
VGlobalData’s ‘Strategic Market Intelligence: Life Insurance in Vietnam-Key Trends and Opportunities to 2021‘ report provides a detailed outlook by product category for the Vietnamese life insurance segment, and a comparison of the Vietnamese life insurance with its regional counterparts.
— Vietnam Insider

Top legislator visits Vietcombank, customs sector after Tet
Chairwoman of the National Assembly Nguyen Thi Kim Ngan recognised the outstanding performance of Vietcombank in 2018 and wished the bank more success in the Year of the Pig during her visit to the bank on February 11, the first working day after the 9-day Lunar New Year (Tet) holiday.
— Nhan Dan Online

Can Tho’s IZs lure 112 million USD investment in 2018
Industrial zones in the Mekong Delta city of Can Tho attracted a total registered investment capital of 112 million USD last year, 12 percent higher than the annual target, according to the municipal Industrial Zones and Processing Zones Management Board.
— VNA NET

Việt Nam takes action to reduce plastic waste
Việt Nam is one of Asia’s five worst polluters of ocean plastic waste, according to international organisations. With 13 million tonnes of waste released to the ocean every year, the country ranks 17th in the world for ocean plastic waste pollution.
— Viet Nam News

US-China trade war a boon for Vietnam
Vietnam is at the top of the list of markets that could benefit from trade diversion coming from US-China trade tensions, building on its increasing competitiveness in manufacturing, according to Pham Hong Hai, CEO of HSBC Vietnam.
— VNA NET

Malaysia Breaks Up Forgery Syndicate Targeting Vietnamese Fishermen
The Malaysian Maritime Enforcement Agency (MMEA) has broken up a syndicate led by a Vietnamese woman that specialized in forging records of foreign fishermen, enabling them to work and cross borders illegally, an official said Tuesday.
— Benar news

Passengers fall victim to fraudulent ticket agents in Vietnam’s post-Tet travel rush
Flights back to Ho Chi Minh City after a long holiday celebrating the Lunar New Year, or Tet, for many people in the central city of Da Nang turned out to be a nightmare as their bookings made through ticket agents for the return services happened to be invalid.
— Tuoi Tre

Philippines Morning News For May 21