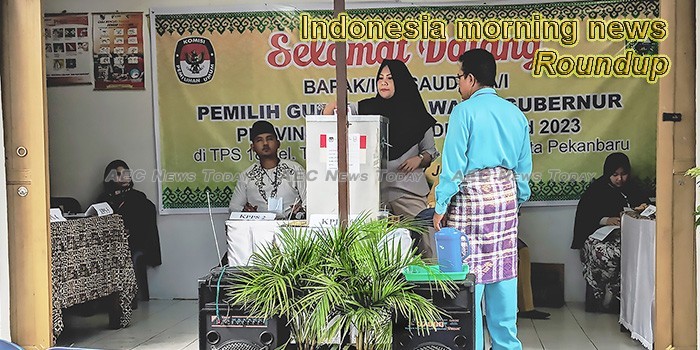 Manufacturing less dominant in economy, but not shrinking
The government is not buying arguments that the manufacturing sector is shrinking even though its percentage contribution to the economy has declined over the past few years.
— The Jakarta Post

Rupiah Down as IMF Cuts Global Projection
The rupiah’s interbank rate in Jakarta closed down today, following the IMF’s correction over the global economic outlook. The IDR lost 20bps or 0.14% to close at 14.153 per US dollar.
— Tempo.co

Sandiaga makes first public post after conspicuous election night absence
Vice presidential candidate Sandiaga Uno finally spoke up on his social media account on Thursday at about 2 p.m. about his latest situation after he was conspicuously absent the whole previous night during his running mate’s two public appearances.
— The Jakarta Post

Indonesia voted. What’s the incoming government’s biggest digital economy homework?
Indonesia held general elections on Wednesday. Everyone gets the day off to cast their vote. Turnout is usually very high with over 70% of the adult population joining in. The day is fondly called the ‘festival of democracy’ by locals.
— Kr Asia

Indonesia’s election: what you need to know
Intellasia East Asia News Indonesians voted in the world’s biggest single-day election across the sprawling equatorial archipelago on Wednesday following a six-month campaign to choose a new president and parliament.
— Intellasia

Indonesia election: Big rematch leaves neither candidate satisfied
President Joko Widodo did not look like a man on the cusp of victory last night as he addressed supporters, even though unofficial quick counts, by no less than five pollsters, tipped him to win re-election.
— Straits Times (annoying popups)

Magnitude 5.2 Earthquake Jolts Sabang, Aceh
An earthquake measuring 5.2 on the Richter Scale jolted Sabang City, Aceh Province, on Saturday at 11:12 p.m. local time, but it did not have potential to trigger a tsunami.
— Tempo.co

What Jokowi’s Second Term in Indonesia Means for the Economy
Go inside the global economy with Stephanie Flanders in her new podcast, Stephanomics. Subscribe via Pocket Cast or iTunes.
— Yahoo News

‘We don’t know how rich we are’: Bali to copyright heritage objects
The Bali administration is drafting a regulation to identify and protect the province’s cultural assets from piracy.
— The Jakarta Post

Successful Elections; Indef Projects Foreign Investment Influx
Bhima Yudhistira, an economist with the Institute for Development of Economics and Finance (Indef), projects an influx of foreign investment after the 2019 elections. He said that the successful elections yesterday will attract investors to put money in Indonesia.
— Tempo.co

Car sales down 13 percent in Q1 of 2019
Domestic car sales declined by 13 percent in the first quarter of 2019 from the same period last year, the Association of Indonesian Automotive Manufacturers (Gaikindo) has reported.
— The Jakarta Post

Chinese Culture Gradually Penetrates Indonesia
Cultural activities are also a key part of the BRI, even though their influence remains limited so far.
— The Diplomat

13 foreign leaders congratulate Indonesia over peaceful elections
President Joko Widodo said on Thursday that leaders from 13 friendly countries had congratulated him for Indonesia’s success in peacefully convening its parliamentary and presidential elections on Wednesday.
— Antara News

Congratulations, Indonesia!
In the end, there were no surprises and no one pulled off an upset win. The whole thing ended the way most people expected: Incumbent President Joko “Jokowi” Widodo won a second term and Gerindra chairman Prabowo Subianto was defeated in his bid for the presidency, again.
— The Jakarta Post (paywall)

Islamism Is the Winning Ticket in Indonesia
Politics has turned religious in the world’s biggest Muslim nation — but that’s part of democracy too.
— Foreign Policy

Restoring the Forest
As he savored the pouring rain, Marwi, 56, told us how he and the people of Aik Berik at the foot of Mount Rinjani have managed to survive. Apparently, living so close to such a great wealth of natural resources has not always guaranteed well-being.
— Tempo.co

What a Second Widodo Term Could Mean for Indonesia’s Banking Sector
Fauzi Ichsan, chief executive officer and commissioner of the board at Indonesia Deposit Insurance Corporation, discusses Indonesia’s election, what the banking sector can expect with Joko Widodo in office for a second term, consolidation in the sector and the possibility of another financial crisis.
— Bloomberg (video)

Indonesian fisheries e-commerce startup Aruna wins Alipay-NUS Enterprise “tech for good” challenge
Whether we like it or not, we cannot escape technology. It’s an indispensable part of our life, a bit of a necessary evil, like money.
— Kr Asia

KPU Requires 35 Days to Complete Real Voting Count
General Election Commission (KPU) chairman Arief Budiman said his side required 35 days at maximum to count all votes in the 2019 general elections. The vote calculation is carried out in stages starting from the polling station (TPS) until the national level manually.
— Tempo.co