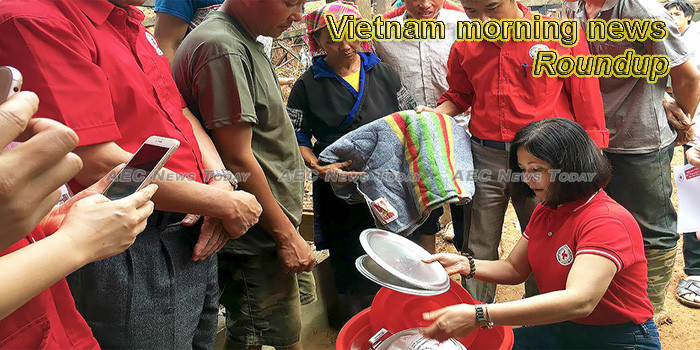 Vietnam’s largest firm Vingroup plans to launch airline in crowded market
Vingroup JSC has applied for a licence to launch an airline next year as Vietnam’s largest conglomerate plans to expand its footprint in one of the fastest growing aviation markets, local media reported on Thursday.
— Yahoo.com

Morrison urged to address human rights on Vietnam visit after calling nation ‘free’
Scott Morrison has been urged to raise human rights concerns with the Vietnamese government when he makes his first official visit there this week, including the case of Australian citizen Chau Van Kham who has been detained since January.
— The Guardian

Scott Morrison’s Vietnam visit and why the Hanoi-Canberra relationship is more important than ever
When Prime Minister Scott Morrison lands in Vietnam today, he will find himself in a booming nation at the cutting edge of China’s aggressive expansionism.
— ABC

Vietnam aviation authority supports Vingroup’s airline project
With a total investment of VND4.7 trillion (US$202.3 million), the airline plans to add six planes on average per year to expand its fleet to a total of 36 by 2025.
— The Hanoitimes

Personal deposits at Vietnam’s banking system up 8% in Jan-Jun
Contrary to the strong fluctuation of deposits from economic organizations, individual deposits increased steadily in the January – June period.
— The Hanoitimes

In Vietnam, 61 percent of online customers save for long-term goals
According to the survey conducted by the financial holding Robocash Group in Vietnam, buying a house or a vehicle are the most common long-term saving goals among the Millennials using online financing tools.
— Vietnam Insider

Tariff removal doesn’t mean easy entrance into EU market: minister
Overcoming tariff barriers doesn’t mean Vietnamese good and services can easily enter the European Union (EU), but they still have to satisfy strict non-tariff requirements of what is one of the world’s most demanding markets, according to Minister of Industry and Trade Tran Tuan Anh.
— VietnamPlus

Viet Nam emerges as attractive destination for Australian investors
An article published in the Australian Financial Review said the Southeast Asian country, best known to Australians as a laid-back holiday destination, is now on the radar for big businesses, attracted by these advantages.
— Viet Nam News

Firms urged to upgrade technology to save energy
Renovating, upgrading and rearranging production lines are important for businesses to save energy and improve productivity as well as product quality, heard attendants at a forum held in Hà N?i on Wednesday.
— Viet Nam News

Everest Education receives $4 million from foreign funds
Everest said the company will use this capital to develop its training centres. The firm currently has seven training centres in HCM City.
— Viet Nam News

Vietnam secures positive trade balances with CPTPP
Positive results from Vietnam’s trade activities with members in the CPTPP indicated Vietnamese companies have better utilized preferential treatments from the deal, relieving pressure for Vietnam in dealing with a decline in exporting farm produce to China.
— The Hanoitimes

Global supply chains remain out of reach of VN businesses
Many Vietnamese companies in supporting industries that can produce high-quality parts are nevertheless struggling to enter large international supply chains or are only able to supply low-value items to them.
— Viet Nam News

Banks launch recruitment drives to prepare for year-end
A number of banks will have to step up recruitment from now to the year-end as they have announced plans to hire thousands of employees this year, but no significant progress has been made.
— Viet Nam News

Indian, Vietnamese firms discuss trade, investment
Trade and investment ties between Vi?t Nam and India are not commensurate with their potential meaning there is still a lot of room for them to grow, the India-Vi?t Nam Business Forum heard in HCM City yesterday.
— Viet Nam News

Shares up on banking, energy stocks
More than 233.6 million shares worth nearly VNÐ7.4 trillion (US$316 million) were traded on the two markets.
— Viet Nam News

How Brazil and Vietnam are tightening their grip on the world’s coffee
A towering machine rumbles through the fields of Julio Rinco’s farm in the Brazilian state of Sao Paulo, engulfing whole coffee trees and shaking free beans that are collected by conveyor belts in its depths.
— Reuters

South China Sea Stand-off: Crisis and Concerns for Vietnam
This is a time of great crisis and concern for Vietnam when its claim of sovereignty has been challenged in the South China Sea, particularly in the block 05.1 and 06.1 where huge deployment by Chinese vessel has been witnessed over the past couple of weeks.
— India Times

Best things to see and do in Vietnam from incredible cities to islands not to miss
Vietnam is a gold pot of new and exciting discoveries for all. Its deserted beaches, natural wonders and bustling cities have long drawn in tourists looking for that dreamy southeast Asian getaway.
— Mirror

Australia and Vietnam are united by trade
Vietnam fought a long, devastating war with America and a short, sharp one with China. Four decades later, the country is the biggest global winner as trade shifts in the face of the worsening economic war between Washington and Beijing.
— AFR

Prak Sokhonn praises growing ties with Vietnam
Foreign Affairs Minister Prak Sokhonn yesterday praised the strong cooperation between the Kingdom and Vietnam, saying bilateral trade for the first six months of this year was about $3 billion while it was about $4.7 billion for the whole of last year.
— Khmer Times

Retail a potential market for franchising in Vietnam
Vietnam’s retail market, one of the three most dynamic in Asia-Pacific, grows 12 percent annually, making it a new rich land for franchisers.
— VietnamPlus

Missing foreigners in Vietnam ‘may have been kidnapped’
Two English teachers who mysteriously disappeared abroad within weeks of each other are feared to have been kidnapped so their bodies can be harvested for organs. Jamie Payatt reports on The Mirror.
— Vietnam Insider

Best Property Developers You Should Know in Vietnam
Here, you’re able to buy units from commercial projects on the primary market. This is often not a big issue, in the end of the day, foreigners mostly look for new or off-plan condos and villas in places like Ho Chi Minh, Bangkok, and Manila. Marcus Sohlberg reports on asiapropertyhq.
— Vietnam Insider

Made-in-Vietnam social network Lotus to make debut
Vietnamese group VCCorp has informed that the pilot version of its “Lotus” social network will officially be launched on September 16.
— Vietnam Insider

Neither insurance nor assurance: Vietnamese agriculture left in the lurch
Storms, floods, other disasters are not uncommon, but Vietnamese farmers can only lament: “Perhaps it’s just God’s plan.”
— Vietnam Insider

Business condition cut urged to facilitate people and businesses
The Prime Minister’s Working Group held a working session in Hanoi on August 21 with representatives from 14 ministries on the substantive reductions in business conditions.
— NDO