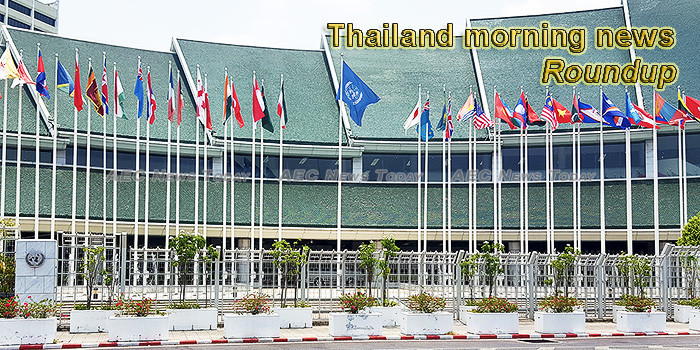 Poor air quality to return to Bangkok and suburbs for remainder of October
People living in Bangkok and surrounding areas are advised to brace for a new round of health-threatening low air quality during the rest of October due to an anticipated increase in PM2.5 dust particles in the atmosphere as less rainfall is forecast, according to the Meteorological Department.
— Thai PBS News

RCEP Will Boost Regional Trade: Thai Envoy To India
Will it, won’t it? The pendulum has been swinging from one end to the other on the part of the Indian government in favour of and against signing the mega trade deal, the Regional Comprehensive Economic Partnership (RCEP).
— Strategic News

Thailand puts crimp in return plans of Cambodian opposition
Thailand has barred a top leader of Cambodia’s opposition party from entering the country, casting doubt on plans for its exiled leaders to return to their homeland against the Cambodian government’s wishes.
— The Washington Post

FTA with EU likely to increase Thailand’s GDP by 1.7 percent
A free trade agreement (FTA) with the European Union (EU) would boost Thailand’s exports and gross domestic product (GDP), according to a study conducted by the Institute of Future Studies for Development (IFD).
— Vietnamplus

Thai government extends visa on arrival fee waiver until the end of April 2020
The government will extend the waiving of visa-on-arrival fees for another six months to boost the number of foreign tourists to the Kingdom.
— The Pattaya News

Panel starts scrutiny of CP’s airport plans
An assessment of a technical plan submitted by a CP-led consortium vying for the Eastern Airport City Project contract will begin on Thursday, according to the Eastern Economic Corridor (EEC) Office.
— Bangkok Post

Pollution control dept: Bangkok smog worsens in 7 areas
The Pollution Control Department (PCD) has reported that the PM2.5 air pollution readings have risen in seven areas of Bangkok and its vicinity on October 22nd .
— Newsline (video)

Myanmar, Thailand agree to use kyat, baht for border trade
U Kyaw Kyaw Maung, governor of the Central Bank of Myanmar (CBM) and his Thai counterpart Veerathai Santiprabhob, have signed a memorandum of understanding (MOU) to promote the use of the Myanmar kyat and Thai baht for trading at the border, according to an October 21 statement issued by the Bank of Thailand.
— Myanmar Times

Thai police arrest ‘kingpin’ in Asian wildlife trafficking
Boonchai Bach, 40, a Vietnamese national with Thai citizenship, was arrested on Friday evening over the smuggling of 14 rhino horns worth around $1 million from Africa to Thailand.
— FourWays Review

FFP loses poll
The by-election in Nakhon Pathom’s Constituency 5 saw the race between the Future Forward Party (FFP) and its main rival Chartthaipattana go down to the wire on Wednesday and FFP lost the seat.
— Bangkok Post

Hitachi targets high-speed rail projects from Texas to Thailand
Hitachi is looking beyond its high-speed rail stomping grounds of Japan and Europe, as it seeks to join a project connecting Dallas and Houston in the U.S. state of Texas and get involved in work for an airport link around Bangkok.
— Nikkei Asian Review (paywall)

Thanathorn waits on ruling
House Speaker Chuan Leekpai has been asked to rule whether Future Forward Party (FFP) leader and list-MP Thanathorn Juangroongruangkit is eligible to sit on the budget bill scrutiny panel as an outsider.
— Bangkok Post

Tackling Thailand’s food-waste crisis
When one-third of all food produced globally is thrown away while nearly one billion people go hungry, food waste is not only a moral travesty, it’s also a crime against nature.
— Bangkok Post

Thai challenges: The major industry barriers to product commercialisation revealed
An expert in the Thai food and beverage industry has weighed in on major barriers that local firms and food researchers with commercial aims face when it comes to commercialising products, particularly centred around a lack of overall understanding of the sector.
— Foodnavigator-asia

More details released on case of German man on overstay allegedly dumping the body of an elderly German woman in local Chonburi canal.
A German national identified only as Richard has been charged with concealing, moving and damaging a corpse as well as being on overstay in Thailand.
— The Pattaya News

Seven people killed in van-truck collision in Ubon
Seven passengers in a mini-bus were killed and four others, including the driver, were seriously injured when their vehicle crashed into a six-wheel truck on a highway in Warin Chamrab district of Thailand’s north-eastern province of Ubon Ratchathani this morning (Wednesday).
— Thai PBS News

Out of 37 countries, Thailand has the worst pension system, says Bloomberg
Thai Residents reports that on Sunday, Bloomberg published an article on the world’s best pension systems, using information gathered from the 2019 Melbourne Mercer Global Pensions Index.
— The Thaiger

PropertyGuru announces that IPO is a no go, stating current IPO market sentiment as main reason
PropertyGuru Limited today announces that it has decided not to proceed with its proposed initial public offering (IPO) on the Australian Securities Exchange (“ASX”).
— e27

International chess competition finishing in Jomtien
More than 300 youth and senior contenders from 42 countries are competing in the 2019 Thailand Pattaya Open Chess Championship, October 19-23 at the Bay Beach Resort in Jomtien.
— The Thaiger