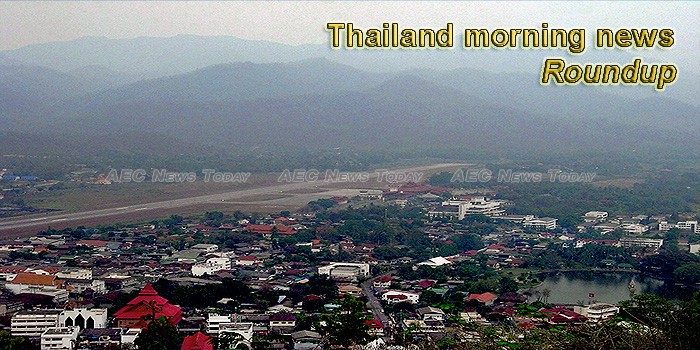 CAAT ready to ban B-737 Max if advised to by FAA
The governor of the Civil Aviation Authority of Thailand said on Tuesday he was ready to ban Boeing 737 Max passenger aircraft from Thai airspace if he received clear instruction to do so from the Federal Aviation Administration (FAA) of the United States.
— Bangkok Post

Thailand’s Tourism Industry Looks to Cash In on Same-Sex Partner Law
Thailand is advancing same-sex partnership legislation. And one of the nation’s biggest industries, tourism, is paying close attention.
— Bloomberg

Thailand’s achievements in HIV are not all widely implemented
“Thailand is progressing in the right direction to end AIDS, but needs sustained political and policy commitment with a sense of urgency for ‘the last miles’,” Dr Praphan Phanuphak of the Thai Red Cross AIDS Research Center told the Conference on Retroviruses and Opportunistic Infections (CROI) in Seattle last week.
— Aids Map

Thailand’s oldest party fails to woo first-time voters
With less than two weeks to go before Thailand’s general election, the country’s oldest political party, founded in 1946, has faced up to an uncomfortable realisation: Young, first-time voters are writing it off.
— Straits Times (annoying popups)

Thailand’s political parties to contest under new election system | Video
Thailand goes to the polls on Mar 24 for the first time since 2011. Over the last five years, the country had come under military rule which has introduced a new constitution and a new election system. Saksith Saiyasombut takes a closer look.
— Channel NewsAsia (very annoying popups)

The fifth largest bank in Thailand deploys facial recognition
Bank of Ayudhya, commonly referred to as Krungsri, has introduced biometric facial recognition technology for verifying the identities of people as they open a deposit account.
— The Paypers

15 years on, family of disappeared Thai lawyer ‘waiting for justice’
The wife of a lawyer who vanished after being snatched off the streets of Bangkok 15 years ago urged Thailand on Tuesday to toughen laws to end impunity of officials accused of carrying out enforced disappearances.
— The Nation (very annoying popups)

Gov’t Petitioned to Reveal 400 Senate Nominees
A legal advocacy group wants the junta to reveal the names of the 400 people short-listed to eventually be appointed senators.
— Khaosod English

Tourism From China Provokes an Internet Crackdown in Thailand
In June 2018, a 19-year-old British tourist told authorities that she had been raped while visiting the Thai holiday island of Koh Tao.
— Coda Story

Thailand looks to bolster leadership position in medical tourism with focus on medical robotics, says GlobalData
With an outstanding medical foundation that includes various internationally accredited medical facilities, qualified healthcare specialists and premium medical services along with a focus on medical robotics, Thailand is well-positioned to be the medical hub of Asia, according to GlobalData, a leading data and analytics company.
— Dotmed

Insurgents behind South bombing spree, not politics
Senior government officials said the series of bomb blasts over the weekend in the southern provinces of Phatthalung and Satun were related to insurgency activities in the predominantly Muslim region, and had no connection with the upcoming election.
— The Nation (very annoying popups)

NSB to file charges against two doctors for helping weight-loss entrepreneur obtain controlled drugs
The chief of the Royal Thai Police’s Narcotics Suppression Bureau (NSB) on Tuesday said his agency planned to file criminal charges against two doctors, who had allegedly helped a wealthy entrepreneur get hold of controlled substances for use in her weight-loss product business.
— The Nation (very annoying popups)

Intolerance hijacking Thai election
Thailand’s election is mere weeks away and regardless of who ends up the victor, developments throughout the period of the military junta’s rule since 2014 should provide several lessons for the country’s future leader.
— The Asean Post

Thai Raksa Chart Diehards Gamble on ‘Vote None’
Thai Raksa Chart Party and its candidates may be out of the race, but it doesn’t mean its supporters are giving up.
— Khaosod English

Most Thais Are Daily Straw Users – Especially Women, Survey Says
One for the morning bottle of OJ, another for afternoon milk tea and yet one more for the dinner table’s glass of lime-infused ice water.
— Khaosod English

Routes Asia to Return to Thailand for 2020
As Routes Asia 2019 draws to a close in the bustling City of Cebu in the Philippines, the hosting baton was passed to next year’s hosts, Airports of Thailand Plc., who will hold the event in the beautiful city of Chiang Mai in northern Thailand.
— Aviation Pros

EC urged to allow international monitoring of election
Thailand’s Election Commission (EC) has been urged to speed up its approval of requests from international organizations to send observers to monitor the upcoming general election.
— Thai PBS News

Obese Cops Sent to Fat Boot Camp for ‘Belly Destruction’
Porky policemen will be forced to work off their accumulated stores of bubble tea and durian at a special belly-adjustment camp after the program was declared a success, a police trainer said Tuesday
— Khaosod English

Phuket police mobilise in pre-election security campaign
A total of 245 Phuket police, law-enforcement officers and volunteers assembled at Phuket City Police Station in Phuket Town yesterday evening (Mar 11) to receive their orders to suppress crime and keep the peace as the country goes to the polls on March 24.
— The Phuket News

STI discloses faster-than-expected R&D achievements and lays down strategies for Thailand to star in the 21st century
Thai public and private sectors invested 1% of GDP in research and development in 2017 (Surveyed in 2018)reaching this goal a year sooner than expected, pushing Thailand forwards strategically in the 21st century.
— Bangkok Post

One Response to "Thailand morning news for March 13"