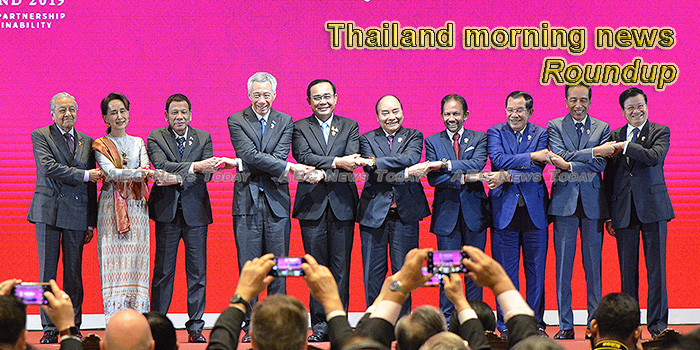 Indo-Pacific gets an extra $68 mln for transparency as US investment soars
The United States has pledged an additional $68 million for new programmes under the Indo Pacific Transparency Initiative (IPTI).
— AEC News Today

Disasters to hit rice output
Alternating drought conditions and flooding in northeastern Thailand are expected to cut paddy production in the region in the 2019-20 crop year by 488,000 tonnes.
— Bangkok Post

Thailand Road Carnage: Death Toll Tops 12,000 Since Start Of The Year
Daily News reported that 12,304 people have been reported dead at the scene of accidents in Thailand since the start of 2019.
— Buriram Times

Confidence dips in October
Despite a spate of government stimulus measures, consumer confidence continued to ebb in October as the public fretted about the tepid economy, political instability, shrinking exports, low farm prices and global uncertainty stemming from trade wars and the Brexit impasse, as well as the US suspension of tariff preferences on 573 Thai goods.
— Bangkok Post

35th ASEAN Summit 2019 promotes barrier free society
Thai people who are marginalized because of diverse disabilities were invited to be part of the 35th ASEAN Summit where their products provided another heartfelt aspect of sustainability to participants.
— Newsline (video)

Thai Deep South Violence Could Signal Resurgent Conflict
A deadly attack by ethnic Malay Muslim insurgents that took the lives of at least 15 people near the southern Thailand town of Yala raises the specter of a resurgent conflict that has been relatively dormant under military rule despite 15 years of unrest that has taken thousands of lives.
— Asia Sentinel

Sam Rainsy wanted posters on display along border
Wanted posters of Sam Rainsy and his colleagues have been posted at all checkpoints along the Thai-Cambodian border ahead of his planned return on Saturday.
— Bangkok Post

DPM Somkid woos investors during Baht appreciation
The government has urged officials to attract investors to invest more in Thailand — especially in the nation’s Eastern Economic Corridor (EEC) –, despite the baht appreciation and the ongoing trade war between the United States and China.
— Newsline (video)

Somkid affirms interest in Hong Kong FTA talks
Despite the ongoing protests, Thailand remains confident about the potential of Hong Kong and is negotiating a bilateral free trade agreement with the autonomous territory.
— Bangkok Post

Myanmar Labor Attaché in Thailand Charged with Corruption
Myanmar labor attaché U San Maung Oo, who represented migrants in Thailand, has been charged by the Anti-Corruption Commission of Myanmar (ACC) over claims he took thousands of bribes.
— The Irrawaddy

Thai Baht Still on a Strengthening Path Near Term, Says Nomura’s Paracuelles
Euben Paracuelles, chief Asean economist at Nomura, discusses the Thai baht, the impact of stimulus and his outlook for the economy. He speaks on “Bloomberg Daybreak: Asia.”
— Bloomberg (video)

E-commerce may boost Thailand SMEs’ income and reach
A SMALL Thai retailer who expands into online sales can boost takings by an average of 51 per cent a year, according to a new report released by an e-commerce platform provider.
— The Business Times

Thailand: ‘lets get right’ campaign encourages infringers to stop selling in MBK center
On October 16th, 2019, the Thai Deputy Minister of Commerce led its management team of the Department of Intellectual Property (“DIP”), the Internal Security Operations Command, the Metropolitan Police and the Economic Crime Suppression Division to inspect the results of the operations of the Thai Intellectual Property Enforcement Coordinator (“IPEC”) at MBK Center in Bangkok. MBK Center is a location, where for many years, numerous counterfeit products have been sold.
— Lexology

Most popular pirated movies website shut down
Department of Special Investigation officials have arrested the administrator of a website that streamed 3,000 pirated movies online and earned about 5 million baht a month from advertisements.
— Bangkok Post

Commentary: India’s RCEP exit is a setback, but not a disaster
With an India-China deadlock out of the way, the path to finalise the historic regional trade agreement is clear, says the Perth USAsia Centre’s Jeffrey Wilson.
— CNA

CP awaits ruling on airport bid
The Charoen Pokphand Group (CP)-led consortium is holding its breath for the Supreme Administrative Court’s ruling in a dispute with the navy committee over the 290-billion-baht Eastern Airport City Project development.
— Bangkok Post

Grab, Get duke it out over food delivery
Super apps Grab and Get have been locked in competition over the food delivery market, which is thriving as the lazy economy” grows.
— Bangkok Post

BRN Blamed for Checkpoint Attack That Killed 15
Security officers on Thursday said they suspected a shadowy militant group called BRN as the party responsible for an attack that killed 15 people in Yala province.
— Khaosod English

Police hold press conference in Pattaya over prisoner escape and capture, update status of those captured
In total 13 suspects have been arrested including three escaped prisoners from the Pattaya Provincial Court after the events of the past few days, police announced this afternoon at a press conference at the Pattaya Court House.
— The Pattaya News

Thai Airways management ‘asked’, staff ‘told’, to cut expenses
Both management and staff likely to lose some entitlements under new policy to reduce costs In a move that will likely contribute little to the airline’s rehabilitation.
— The Thaiger

Ease on foreign investments and cut on official interest rate
The Bank of Thailand will now allow Thai residents to send money overseas to invest directly and the domestic trading in gold in foreign currencies.
— The Thaiger

Cabinet go-ahead for 3.6 billion baht spend to put electrical cabling underground
The Cabinet has approved expenditure of 3.6 billion baht to help the Metropolitan Electricity Authority speed up the moving of power lines underground in areas along MRT lines – the announcement from deputy government spokesperson Traisulee Traisoranakul.
— The Thaiger

UPDATE: The latest FACTS we have about American and Thai wife in Sa Kaew
As one commenter rightfully said today, “more twists than the road to Pai”. Information, and plenty of rumours, have been fast and furious in recent days in regards to the story of the American and two Thais who escaped from the Pattaya Court holding cells on Monday after stabbing a man and threatening staff with a gun.
— The Thaiger

Where to Float Your Krathongs in Bangkok 2019
Whether you want an opulent mall event with Mickey Mouse, an old school temple fair, or just a typical park to float your krathongs, the capital’s got you covered.
— Khaosod English

Opposition seeks to ruin govt’s New Year party
A “shock and awe” campaign has been promised, but the apparently-imminent upcoming censure debate can make or break the opposition as much as it can give the Prayut Cabinet a nightmarish countdown to 2020. Simply put, a lot are at stakes for both sides.
— Thai PBS News

KBank allots B5bn for digitisation plan
Kasikornbank (KBank) is pursuing an ambitious digitisation strategy, with a plan to invest about 5 billion baht yearly in technology like data analytics and online lending to future-proof its business from technological disruption.
— Bangkok Post

Volunteer village guard system in Thailand’s south up for review after Tuesday’s deadly attack
The village guard system, used as part of the local volunteer security in the Deep South of Thailand, is set to be completely reviewed, or replaced by a more mobile system where village defence volunteer units will be on regular patrol to seek insurgents, instead of being a “sitting duck”.
— The Thaiger

Alibaba promoting Thai products to Chinese buyers
Alibaba, the Chinese e-commerce giant, is hosting a special section on its website dedicated to Thai products.
— The Thaiger

5 Years of Junta Repression Retold Through 118 Political T-Shirts
The exhibition, called “Never Again,” is a must for political junkies.
— Khaosod English

Police Arrest Mae Manee’s Mom As Scam Balloons to Billions in Damages
Police on Thursday arrested the mother of an alleged ponzi scheme ringleader accused of scamming at least 40,000 people out of almost 1.4 billion baht in damages.
— Khaosod English