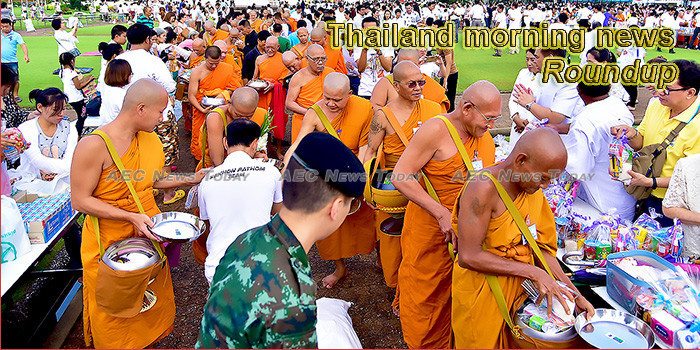 THAI’s profits take Q1 nosedive
Thai Airways International Plc (THAI) has blamed the appreciation of the baht, the US-China trade war and the closure of Pakistani airspace for a 83% dive in its year-on-year first-quarter profits.
— Bangkok Post

BoT prepares for US manipulation listing
Bank of Thailand governor Veerathai Santiprabhob has acknowledged the possibility that the US will add Thailand to a watch list for currency manipulation because of a high current account surplus, but not for stepping into the foreign exchange market for trade advantages.
— Bangkok Post

Thai migrant purge in works
The Labour Ministry is stepping up measures to curb the growing number of Thai nationals intending to live and work illegally in South Korea, as the number of illegal Thai immigrants in South Korea has soared to 140,000.
— Bangkok Post

OSMEP unites with SPEED-D to help SMEs deliver products nationwide
The Office of Small and Medium Enterprises Promotion (OSMEP) is working with a transport operator to offer a 24-hour delivery channel via the 7- Eleven network, to increase SME product sales.
— NBT World (video)

Stark choices await Jurin
As the Democrat Party’s share of the electoral dividends in the March 24 polls was unprecedentedly thin, its newly elected leader Jurin Laksanavisit has an uphill task in restoring the Democrats’ lost popularity.
— Bangkok Post

Dems, Bhumjaithai form pact
The Democrat and Bhumjaithai parties have agreed to pair up as “a political duo” to use their combined number of 103 MPs as a way of increasing leverage to bargain for cabinet seats, a source said.
— Bangkok Post

B10 to get wider distribution
The Energy Ministry plans to make biodiesel B10 available at 340 petrol stations this year to increase consumption of crude palm oil in the country’s transport sector.
— Bangkok Post

Large crowd visit Buddhism Week 2019
Many Buddhists have visited the Larn Khon Mueang plaza in front of the city hall of the Bangkok Metropolitan Administration (BMA), the venue for this year’s Buddhism Promotion Week, on the occasion of Vesaka Day.
— NBT World (video)

Premier acknowledges state railway projects
The Prime Minister yesterday was briefed on several plans of the State Railway of Thailand (SRT) during a meeting with the State Enterprise Policy Committee at Government House.
— NBT World (video)

‘Mushroom-Picking Couple’ Gets Royal Pardon
A royal pardon on Thursday released a couple sentenced to decades in prison for encroaching on forests.
— Khaosod English

Thanathorn vows to form government
Leader Thanathorn Juangroongruangkit has said his Future Forward Party will be the core to form the next government with him as PM if he succeeds, minutes after the Election Commission asked the Constitutional Court to disqualify him as MP.
— Bangkok Post

Compromise could save expressway authority from paying exorbitant compensation
YouTube Thailand’s Expressway Authority (EXAT) board has agreed to extend the concession period of NECL, a subsidiary of Bangkok Expressway and Metro Public Company (BEM), to operate two expressways for an additional thirty years.
— The Thaiger

Ganja coming in allergy-type drops ‘by July’
The Government Pharmaceutical Organisation (GPO) said on Thursday it is ready to deliver medicinal cannabis products in the form of sublingual — or under-the-tongue — drop to hospitals nationwide by the end of July.
— Bangkok Post

As readers abandon print, The Nation announces closure of daily printed paper
Another big national newspaper bites the dust, following an inevitable worldwide trend. A sad day for The Nation as they announce the closure of the Bangkok-based English daily after 48 years.
— The Thaiger

DNP announces temporary closure of national parks
The Department of National Parks, Wildlife and Plant Conservation has declared temporary closures to certain national parks nationwide to allow for the restoration of nature and tourist safety in the wake of torrential rains and volatile weather conditions in May.
— Pattaya Mail

Want a home in Thailand? You have 450,000 empty ones to choose from
A glut of condominiums as Thailand’s economy wavers and stricter mortgage-lending rules kick in is creating a buyer’s market in Bangkok.
— Bangkok Post

Baht set to rise until end of month
The upside gain for the baht, Asia’s strongest performing currency this year, is limited after rallying since the beginning of this month, propelled by the escalating trade tension between the US and China,…
— Bangkok Post

Premier acknowledges state railway projects
Prime Minister Prayut Chan-o-cha has acknowledged the State Railway of Thailand’s plans to hire an additional 1,900 employees for its dual-track rail project, and to allocate some 3.4 billion baht in registered capital for the setting up of an affiliated firm with access to a revolving fund for the Red Line rail project.
— NNT

OPCD submits report to World Bank research team
The Office of the Public Sector Development Commission (OPDC) has submitted a report on Thailand’s growth in 10 stages to a research team from the World Bank. The information will be used for the World Bank’s Ease of Doing Business Report for next year.
— NNT

Malaysia Extradites Thai Republican as Crackdown Intensifies
An asylum seeker who campaigned against the monarchy was extradited from Malaysia despite obtaining a recognition from the UN, activists said Thursday.
— Khaosod English

Former Wat Sam Phraya monks jailed
The Criminal Court for Corruption and Misconduct Cases has sentenced a former abbot of Wat Sam Phraya and his secretary to six years and three years in jail, respectively, for laundering money budgeted to promote Buddhism into their own pockets.
— Bangkok Post

Prayuth Says New Senators Have King’s Endorsement
Junta chairman Prayuth Chan-ocha on Wednesday warned critics that the regime’s selection of new senators was approved by none other than His Majesty the King.
— Khaosod English

Weather warnings out for parts of the country
The annual monsoon is here. Bangkok, along with 55 other provinces in Thailand, have thunderstorms forecast over the next 24 hours.
— The Thaiger

Thai Forest Conservation Party joins Palang Pracharath Party
On Wednesday (May 15), all 498 members of parliament arrived at the Election Commission (EC) headquarters to receive an MP endorsement letter. Meanwhile, the Thai Forest Conservation Party, which has two seats in parliament, has decided to join a political alliance led by the Palang Pracharath Party in a bid to form a coalition government.
— NNT

‘My Dream Came True:’ Temple Security Guard Admitted to Top Uni
The story of Wee, a temple security guard who has been accepted into a veterinary program at one of the nation’s top universities, is warming the hearts of underdogs nationwide.
— Khaosod English

Opinion: The Short-sighted Hunt for Anti-Monarchists
The lese majeste law may be draconian – but it’s still better than enforced disappearance or extrajudicial killings.
— Khaosod English

Meteorological Dept warns of heavy rain May 17-19
The Meteorological Department has reported that all regions of Thailand can expect thunderstorms, gusty winds and heavy rain from May 17-19, especially the northeastern region where rain storms are expected in 70 percent of the area. By the beginning of next week the volume of …
— Pattaya Mail

Fisheries body wants work permit clarity
The National Fisheries Association of Thailand is calling for a clearer policy regarding the renewal of work permits for Myanmar, Cambodian and Lao migrant workers whose work permits are due to expire between this year and next year.
— Bangkok Post

New school term begins nationwide
Many schools in provinces outside of Bangkok have also started the new school semester, with many parents sending off their children at school this morning requiring facilitation and assistance from officials to prevent traffic congestion.
— NNT

Six major drug gang members held, 400,000 pills seized
Six alleged members of the the “Mun Tuk Med” (every pill is fun) drug gang were arrested and more than 400,0000 speed pills, worth about 40 million baht, seized during a raid on a rented house in Muang district on Thursday.
— Bangkok Post

EC Asks Court to Rule on Disqualifying Thanathorn
Election regulators on Thursday asked the Constitutional Court to strip the leader of the popular Future Forward Party of his MP seat.
— Khaosod English

Register your hotel within 30 days – Hua Hin unlicensed premises warned
FILE PHOTO 170 illegal hotel and resort operators in Hua Hin have been warned to register and obtain Hotel licences within a month or they will face jail or a fine.
— The Thaiger

PM’s concerns over youth addiction to mobile phones and games
Prime Minister Prayut Chan-o-cha has expressed his concerns over children addicted to using their mobile phones and the games they contain. He has called on parents and teachers to set proper ways of living life to keep them from developing a short attention span and irritable nature.
— NNT

Scheduled blackout to affect Pa Khlok, Koh Yao islands
he power outage will be from 9am to 4:30pm, affecting areas along Pa Khlok Rd (Route 4027), the Provincial Electricity Authority (PEA) Thalang office announced in a notice posted on Tuesday (May 14).
— The Phuket News

Power outage in Chalong
PHUKET: The Provincial Electricity Authority (PEA) Chalong branch has announced that the electricity supply will be temporarily shut off in parts of Chalong on Friday (May 17) as work is carried out on high voltage power cables.
— The Phuket News

Shatter your mind at this totally psychedelic Bangkok temple show (Video)
A hypnotic spectacular of light and sound promising to slake searching minds with answers to life – and dope visuals – will be projected for free on the walls of a Bangkok temple.
— Coconuts (paywall)