Thailand morning news for May 1 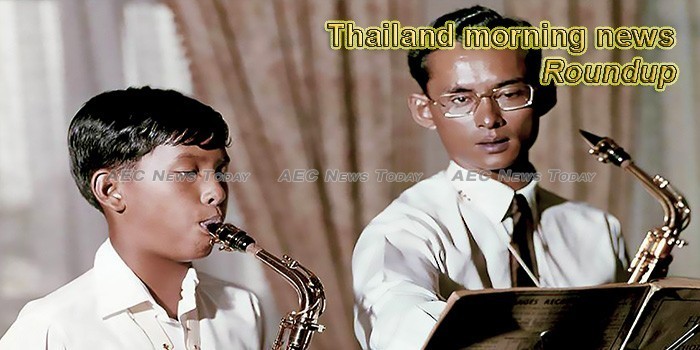 Thanathorn threatens to sue EC
The Future Forward leader has threatened to take legal action against the Election Commission after a four-hour meeting with its panel handling his media shareholding case on Tuesday.
— Bangkok Post

Thailand rehearses coronation for HM the King
Forty roads were closed in Bangkok as a band and officers on horseback marched past the Grand Palace on Sunday in a dress rehearsal for this weekend’s coronation of HM King Maha Vajiralongkorn, the country’s first in nearly seven decades.
— NBT World (video)

Blockchain tops business trend survey
About a third of Thai executives say blockchain will be the most important new technology for their business over the next three years, according to a survey by Accenture.
— Bangkok Post

Bangkok listed No.2 on YouDiscover site
Bangkok ranked second on the online travel platform YouDiscover’s 2019 list of the top 15 destinations for travellers in Southeast Asia, behind Siem Reap and ahead of Singapore.
— Bangkok Post

Man wanted for B2m gold shop heist surrenders to police
A Pattaya hotel employee wanted for a 2-million-baht robbery of a gold shop in Sattahip district of Chon Buri on Sunday has surrendered to police in Phachi district of Ayutthaya.
— Bangkok Post

As heavens open, Phuket water supply restored
As the rain continues to soak Phuket today (Apr 30), the Chief of the Phuket office of the Provincial Waterworks Authority (PWA) has confirmed that water pressure in mains supply pipes to residents and businesses across most of the island has been restored to near full normal pressure.
— The Phuket News

Netflix and ‘Crazy Rich Asians’ production team announce cave rescue project
Netflix, the most popular TV streaming service in Thailand, are teaming up with the producers of the hit film “Crazy Rich Asians” for a production about the rescue of the MuPa (Wild Boar) football team from Chiang Rai’s Tham Luang caves last July.
— The Thaiger

Fake drugs, Bangkok raid
The Food and Drug Administration (FDA) is warning people about the use of unlicensed or fake treatments that could lead to serious or even fatal side effects
— The Thaiger

Diphtheria cases up in Thailand
The Thailand Department of Disease Control (DDC) with the Ministry of Public Health (MOPH) reports a diphtheria incidence rate that is 2 times higher than the same period of last year (2018) and also the median of the past 5 years (2014 – 2018).
— Outbreak News

Visas for Sri Lanka still available
Visas for Thai travellers to Sri Lanka have not been suspended in the wake of the Easter bombings in Colombo, the country’s ambassador to Thailand says.
— Bangkok Post

Preparation for grand coronation
The Royal Thai Navy conducted a dress rehearsal of a royal barge procession in the Chao Phraya River and the City Hall decorated Ratchadamnoen Avenue with flowers in preparation for coronation-related ceremonies for His Majesty the King from May 4 to 6.
— Bangkok Post

Gov’t Hopeful Thai Massage Gets UNESCO Recognition
The government said Tuesday it has petitioned the United Nations to recognise Thai massage as part of its intangible heritage.
— Khaosod English

‘Big Bikes’ May be Slapped With 18% Tax, Gov’t Source Says
A proposed tax hike on buyers of high-powered sports motorcycles will soon be submitted to the Cabinet for consideration for its larger carbon footprint, a source said.
— Khaosod English

HMAS Canberra docks at Phuket for training and community activities
The HMAS Canberra has brought over 1,000 Australian sailors to Patong Bay to participate in activities and military cooperation missions in Phuket this week.
— Pattaya Mail

Commerce Ministry tackles oil palm pricing
The Ministry of Commerce is working hard to solve the low pricing of oil palm kernels, bringing forward measures over the next two months to bring down the stock volume to a normal level.
— Pattaya Mail

Thanathorn produces traffic tickets to prove he was speeding to Bangkok to transfer his media shares
Future Forward party leader Thanathorn Juangroongruangkit has produced, via his Facebook page, images of three traffic tickets he received for speeding to prove that he was rushing back to Bangkok, from the northeastern province of Buri Ram, to transfer all his shares in V-Luck Media Company on January 8th.
— Thai PBS News

Electricity cuts in Cherng Talay
The Provincial Electricity Authority (PEA) Thalang office has announced that the electricity supply will be temporarily shut off in parts of Thalang on Thursday (May 2) as work is carried out on installing new high-voltage cables.
— The Phuket News

Routine breathalyser stop leads to huge methamphetamine bust
A driver stopped for a breathalyzer test under the Lat Phrao expressway in Bangkok was instead found in possession of 6 million speed pills and 449kg of crystal methamphetamine.
— Bangkok Post

Sad end to 264kph big bike ride
A video clip has gone viral with a sad message and a reminder of the danger of speeding on public roads – showing a young big biker accelerating to 264 kilometres per hour just before failing to take a curve in Phetchabun province on Sunday.
— Bangkok Post

Kerry Deliverymen Unbox and Play With Customer’s Sex Toys
A major delivery service on Tuesday said it fired four of its employees for unboxing a customer’s sex toys and playing with them.
— Khaosod English

Edtech requires certain distinct help that’s different from other verticals: StormBreaker’s Pat Thitipattakul
Traditional accelerators in Thailand are not suited for edtech, as they focus more on the ‘typical tech startups’ with emphasis on synergising with the corporates’ main businesses
— e27

Learning to excel in a disruptive era
Artificial intelligence (AI), automation, machine learning, big data, digital marketing, blockchain, fintech, Industry 4.0, Business 4.0 and even Human Resources 4.0 — no doubt you’ve read about most or all of these topics in the past few years.
— Bangkok Post tech

How green buildings improve air quality
Bangkokians’ awareness of the importance of clean air has increased substantially in recent months, as the country has suffered from unprecedented levels of air pollution.
— Bangkok Post property