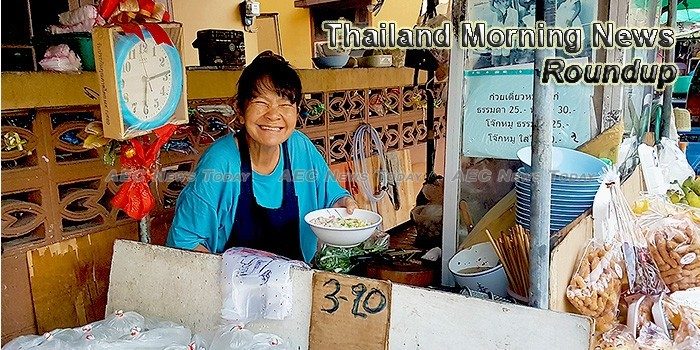 AoT wants to replace old Don Mueang terminal
Airports of Thailand Plc wants the AoT board to agree to demolishing the old, disused terminal at Don Mueang and replacing it with a new, larger facility to cope with the ever-growing number of international passengers.
— Bangkok Post

Continuing haze points to failure of Asean agreement
THE FAILURE in the implementation of the Asean Agreement on Transboundary Haze Pollution (AATHP) has led to the prolonged and severe haze season in the northern region of Southeast Asia, while the goal of a haze-free Asean by 2020 was far from achievable, environmentalists said yesterday.
— The Nation

Japan drafts Thailand to sell Trump on TPP
Japan’s point man on the Trans-Pacific Partnership will visit Thailand in early May as the Southeast Asian nation looks to join the sweeping trade pact, with Tokyo hoping that fresh entrants will help bring the U.S. back on board.
— Nikkei Asian review (paywall)

Pattaya official thinks garbage figures are rubbish
Officials in Pattaya have called in the National Council for Peace and Order (NCPO) to conduct an assessment of how much garbage accumulates in the resort city each day, after disputing figures supplied by a private firm.
— Bangkok Post

CIA’s legacy of torture lives on in Thailand
In February 2015, security forces in southern Thailand hauled in a 26-year-old Muslim man and demanded he confess to participating in a violent separatist insurgency. Officers tied him to a chair, covered his face with a shirt and poured water into his mouth until he choked.
— The San Francisco Examiner

Internet providers warned to refund their customers in case of service disruption
Internet service providers have been warned to refund or to give discounts to their customers in case their services are disrupted otherwise they may have their licenses temporarily suspended, said Mr Takorn Tantasith, secretary-general of the National Broadcasting and Telecommunications Commission, on Tuesday (April 24).
— Thai PBS

Thailand remains a ‘benchmark’ for Philippines agriculture
THAILAND is still a good benchmark for the Philippines especially in terms of agriculture industry development, an official said.
— SunStar

Tests uncover Viagra in stars’ diet products
A precursor used to make methamphetamine, or ya ba, mercury and even Viagra were among ingredients found in substandard dietary supplement products and cosmetics promoted and sold by celebrities, the Dietary Supplement Industry Club said Wednesday.
— Bangkok Post

New Bt37-billion motorway in South planned to boost trade with Malaysia
THAILAND plans to build a 62km motorway in the southern province of Songkhla to the border with Malaysia in a bid to boost bilateral trade and cross-border tourism that is currently worth an estimated Bt500 billion per year, Transport Minister Arkhom Termpitayapaisit said yesterday.
— The Nation

Officials reject KTB-TMB merger talk
After a week of mounting speculation over a potential consolidation between Krungthai Bank (KTB) and TMB Bank, KTB’s president and TMB’s chairman both dispelled the rumours Wednesday, saying there is no merger discussion plan.
— Bangkok Post

SCG bearish based on baht projections
SET-listed Siam Cement Group (SCG), Thailand’s largest cement maker and industrial conglomerate, is concerned its revenue is unlikely to hit its growth target of 5-6% to 472-477 billion baht because of the baht’s strength.
— Bangkok Post

TAT to team up with Alibaba to establish online Thailand tourism platform
The Tourism Authority of Thailand (TAT) is in the process to enter into a partnership with Alibaba, and its online travel subsidiary Figgly.com, to develop an online platform promoting Thai small tourism operators and emerging destinations to Chinese travellers.
— TAT News

Phuket luxury villa sales surging
Phuket appears to be on an upward swing in the property market following a few years languishing with slower sales.
— The Thaiger

KMITL showcases students’ innovations, strikes deal with Alibaba
King Mongkut’s Institute of Technology Ladkrabang (KMITL) has organized an innovation fair to display students’ work, while an agreement has also been signed with Alibaba Group on the production of a technology workforce.
— NNT

Yasothon to celebrate Rocket Festival 2018
he Bang Fai or Rocket festival, is held annually in the middle of May, just before the start of the rainy season
— NNT