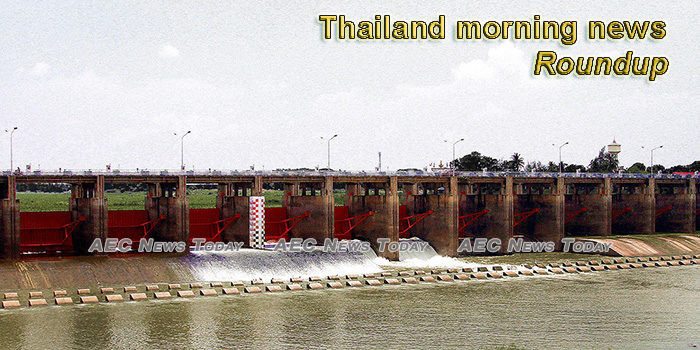 The nation’s schools close today
Thailand’s education minister today ordered all schools nationwide to close from today as a measure to to tackle the spread of the Covid-19 coronavirus.
— The Thaiger

At least 400,000 infections expected
Widespread transmission will slow down until the number of infected cases per week peaks between January and February next year.
— Bangkok Post

Thailand Ready for Stage 3 Virus Outbreak, Prayut Says
Thai Prime Minister Prayut Chan-o-cha on Monday announced on national TV that the government is ready to step up measures to contain COVID-19 if the country reached the so-called Stage 3 virus outbreak, or the full-blown epidemic.
— Khaosod English

B130m in assets seized from suspected drug baron
The Office of the Narcotics Control Board (ONCB) on Tuesday announced it has seized assets worth 130 million baht from the narcotics ring believed to be run by Chan Xue.
— Bangkok Post

Thai- Lao border closed in Phayao
The border crossing to Laos in Phu Sang district of this northern province has been closed from both sides due to the Covid-19 threat.
— Bangkok Post travel

New Cluster of 30 Patients Linked to Boxing Stadium
Eleven people who went to Lumpinee Boxing Stadium with a cluster of coronavirus patients were among the 30 new cases of infection reported in Thailand, a health official said Tuesday.
— Khaosod English

Thailand at risk of economic depression in H1 due to COVID-19
Thailand is on course for an economic recession in the first half of this year, with its 2020 GDP being forecast to decrease 0.3 percent from the previous 1.8 percent as a result of the COVID-19 outbreak, according to the Siam Commercial Bank’s Economic Intelligence Centre (EIC).
— Vietnamplus

Covid-19 fear fuels rush for traditional herbal medication
The rise in Covid-19 infections has people queuing to buy the traditional medicinal herb fa talai jone, or andrographis, in the hope it will protect them from contracting the virus, despite a lack of scientific proof.
— Bangkok Post

Commerce Ministry confirms Thailand has sufficient groceries supply
The Ministry of Commerce is now monitoring the stocks of grocery items closely and is asking people to refrain from panic-buying or hoarding commodity goods.
— Newsline (video)

Migrant workers warned against return to Myanmar
Myanmar wants Thailand to discourage Myanmar migrants from returning home during the Songkran festival, in a bid to prevent the cross-border spread of Covid-19.
— Bangkok Post

PM addresses nation, asking for solidarity to fight COVID-19
The Prime Minister has addressed the nation, asking Thais to be united amidst the continuous spread of COVID-19 in Thailand and around the world.
— Newsline (video)

In Thailand, US Threads Between Military Interest and Democratic Ideals
The demise of Future Forward, the country’s second-biggest opposition party, removes a challenge in the parliament for the military-backed government and armed forces, and has a knock-on effect to the U.S.-Thai relationship.
— VOA Khmer

Thailand long term residence options: Comparing elite status and permanent residence
This article focuses on long term Residency in Thailand in either the Thailand Elite program or in lawful permanent resident status as opposed to non-immigrant visas which, although renewable, only have an annual or bi-annual validity.
— Bangkok Post

Arrivals to get free SIM cards with internet
Mobile phone SIM cards with unlimited internet service will be distributed to inbound travellers for free before they pass through immigration counters as part of a move to help track arrivals amid the coronavirus outbreak.
— Bangkok Post

Thailand Post offers online shopping promotion
Thailand Post will charge people sending a parcel weighing up to one kilogramme 19 baht each, starting on Tuesday, as part of a measure to accommodate online shopping in the wake of the coronavirus outbreak.
— Bangkok Post