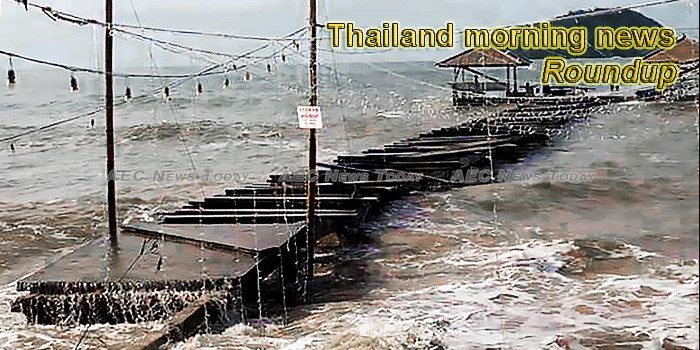 Saudi asylum-seeker challenges Thailand human rights record as Asean chair year begins (video) *update #6
Just seven days in to its year as Asean chair and Thailand is embroiled in a human rights controversy that threatens to caste a lingering shadow over its custodianship of the region’s 4.5 million people for the next 12 months.
— AEC News Today

Confusion reigns in poll date debate
Confusion has erupted over what the 150-day deadline on the election is following the enactment of the election law, with the uncertainty likely needing a Constitutional Court interpretation, according to political observers.
— Bangkok Post

Facemasks urged as haze persists
The Pollution Control Department (PCD) has urged people in worst-affected areas to wear masks as air pollution is set to get worse over the next two to three days.
— Bangkok Post

Saudi Woman Leaves Bangkok Airport Under UN Care
A runaway Saudi woman who barricaded herself inside a room at a Bangkok airport rather than be deported back to her family has left safely in UN care.
— Khaosod English

Industry Min reports 200-million-baht’s storm damage
The Ministry of Industry expects the damage done by Tropical Storm Pabuk to manufacturing plants in the south to be around 200 million baht.
— NNT

Optimism despite obstacles
Thailand’s economy will face a number of disruptions this year, from the US-China trade war to domestic elections, while overall economic growth is expected to marginally decrease, according to a panel of government officials and a banker.
— Bangkok Post

NLA asked public to halt criticism against Government
The president of the National Legislative Assembly (NLA) has called on the general public and politicians to refrain from lashing out at the government in regard to the election date.
— NBT World (video)

Thailand will not forcibly deport Saudi woman: immigration chief
The Saudi woman who made a desperate plea for asylum after landing at Bangkok airport will not be forcibly deported from Thailand, an official said Monday.
— The Nation (very annoying popups)

GHB launches assistance for flood-affected customers
The Government Housing Bank (GHB) has issued six measures to help people affected by Tropical Storm Pabuk in the South. Budget of one billion baht will be spent on its projects for people affected by inundation in 2019.
— NBT World (video)

Ex-CDC spokesman clarifies 150-day window to hold poll
A FORMER spokesman of the now-defunct Constitution Drafting Commission (CDC), Chartchai na Chiangmai, yesterday confirmed that the 150-day period prescribed by the charter on holding the election only covers the casting of ballots, not the announcement of election results.
— The Nation (very annoying popups)

Air pollution back with a vengeance in greater Bangkok
With the joy of the New Year holidays having just passed, the woe of air pollution has again struck people in Bangkok and neighbouring provinces this week.
— The Nation (very annoying popups)

TMVS pushes Mice standards
More than 1,200 exhibition rooms and spaces are scheduled to be certified under the Thailand Mice Venue Standards (TMVS) within the next five years, the largest number in Asean.
— Bangkok Post

South still reels after Pabuk
THE DEATH toll from tropical storm Pabuk has risen to four, while three southern provinces are still reeling from its impact yesterday.
— The Nation (very annoying popups)

Drink drivers face hospital rehab stay
An upsurge in the number of driving offences during the New Year holiday period has prompted officials to keep violators under hospital care and/or surveillance to bring drink-driving under control.
— Bangkok Post

Alleged Chai Nat child rapist “cannot buy his way out”
POLICE IN Chai Nat say it‘s impossible for a teacher accused of raping a 12-year-old schoolgirl to buy his freedom with a cash payment to the parents because the offence is ‘non-compoundable’, meaning it cannot be settled other than through a criminal process.
— The Nation (very annoying popups)

Shortages seen in six job fields
Skilled workers are a critical driver of business success. A shortage of capable staff has become a major challenge in many countries and could significantly affect economic growth.
— Bangkok Post

Normal life resumes in Songkhla after Pabuk passes through
Life has returned to normal in Songkhla following tropical storm Pabuk, which swept across the Southern region at the end of last week.
— The Nation (very annoying popups)

Download: The GovInsider Guide to Thailand 4.0
“We need to create cities that can be drivers of the economy”. This was the vision set out earlier this year by Thailand’s Deputy Prime Minister Somkid Jatusripitak. How will the nation achieve its aims?
— GovInsider

Operators urgently restore mobile networks in storm-hit areas
The National Broadcasting and Telecommunications Commission (NBTC) has reported that major mobile network operators are urgently repairing telecommunications infrastructure in Nakhon Si Thammarat and nearby provinces affected by Tropical Storm Pabuk that weakened to a depression as it moved westward and entered the Andaman Sea.
— NBT World (video)

100,000 rai devastated by Storm Pabuk
According to the Ministry of Agriculture and Cooperatives, large areas of rubber and oil palms, were destroyed when Tropical Storm Pabuk made landfall in southern Thailand last week.
— NNT

Govt to help medical facilities overcome language barriers
As part of measures to ease the expanded acceptance of foreign workers scheduled to start in April, the Japanese government is planning to help facilitate the use of tablet devices with translation functions at medical facilities. The step is one among a comprehensive package of support measures compiled at the end of last year to promote coexistence with foreign nationals.
— The Nation (very annoying popups)

Two injured after collapse of under-demolition buildingÂ
A four-storey building in Bangkokâs Soi Ramkhamhaeng 51/2 area, which was in the process of being demolished, partially collapsed on Monday afternoon, resulting in injuries to two passers-by.
— The Nation (very annoying popups)

Thailand morning news for May 4