This has been an AEC News Today breaking news story. No further updates will be made to this story 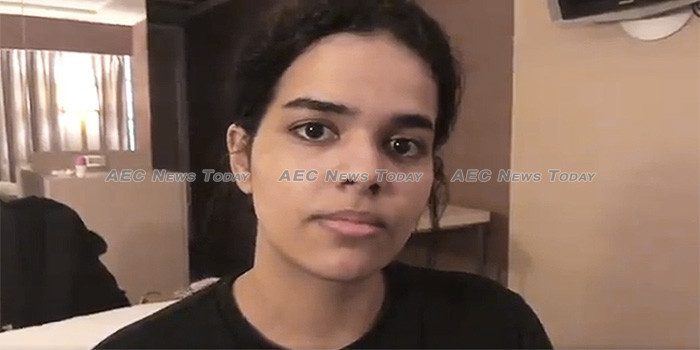 Just seven days in to its year as Asean chair and Thailand is embroiled in a human rights controversy that threatens to caste a lingering shadow over its custodianship of the region’s 4.5 million people for the next 12 months.

At the heart of the controversy is a frightened 18-year-old Saudi Arabian woman, Rahaf Mohammed Mutlaq al-Qunun, currently barricaded inside a hotel room on the airside of Thailand’s Suvarnabhumi Airport.

Using the opportunity of a family visit to Kuwait to flee a history of years of domestic abuse, beatings, and death threats from her parents and male members of her household, Ms al-Qunun boarded a Kuwait Airlines flight to Thailand, en-route to Australia, where she intended to seek asylum.

De-plaining at Bangkok International Airport, she says she was met by Saudi Arabian and Kuwaiti diplomatic staff from the Bangkok embassies who forcibly took her passport from her and led her to a room at the Miracle Transit Hotel, on the ‘secure side’ of Thailand border control. An area reserved for those with valid flight documents and not the accommodation ordinarily available to those who have been denied entry to the kingdom.

At a media briefing yesterday to which foreign media were not invited, Thailand immigration chief, Lieutenant General Surachate ‘Big Joke’ Hakparn, denied that Thailand had detained Ms al-Qunun, telling Benar News: “She escaped her parents and was to enter Thailand, but she can’t because she doesn’t have all documents”.

Describing the situation as a “family matter”, Lieutenant General Hakparn said, “we escorted her to the transit area and she booked her flight back to Kuwait using her money. This despite Ms al-Qunun having a valid onward ticket to Australia and a visa permitting her entry.

Lieutenant General Hakparn also told AFP that Ms al-Qunun had no further documents such as return ticket or money”.

No return ticket or insufficient funds would be grounds for Thailand immigration to deny Ms al-Qunun entry to the kingdom, however her original plan was to only transit through Suvarnabhumi for which no such requirement applies.

Last night Ms al-Qunun told AEC News Today that Saudi Arabian authorities intended to force her on board Kuwait Airlines flight KU 412 scheduled to depart Bangkok today at 11.15am bound for Kuwait City. She will then be taken to Saudi Arabia, she said.

In a video tweet posted a short while ago Ms al-Qunun said she had locked herself in her room and was not opening the door until she had spoken with representatives of the United Nations High Commissioner for Refugees (UNHCR), advising of her intent to seek asylum.

Ms al-Qunun has also asked people via her twitter account, which has grown from zero followers to more than 31,000 followers in less than one week, ” to protest against deporting me to Kuwait Please I need u(sic) all I’m shouting out for help of humanity”.

As a party to the UN Convention against Torture and Other Cruel, Inhuman or Degrading Treatment or Punishment, Thailand is obligated not to return anyone to a territory where they face a real risk of torture or ill-treatment.

In a series of tweets in Arabic and English, and in private tweets to AEC News Today, Ms al-Qunun has repeatedly claimed that she fears returning to Saudia Arabia, believing that she will be either imprisoned or killed by her family on her return. It was a male family member who reported Ms al-Qunun to authorities in Saudia Arabia for travelling without a male family member’s approval.

Since AEC News Today first raised Ms al-Qunun’s situation with Thailand’s Ministry of Foreign Affairs (MFA) at 2pm on Sunday, Jan 6, the only response has been “We note your queries but do not have any information at this stage”. Emails sent to the Saudi Arabia Embassy, Bangkok, have not been responded to.

“Ms Rahaf says she fears for her life if she is returned to Saudi Arabia and her family, who have physically and psychologically abused her for daring to assert her independence.

“The way she has been treated, and the danger she faces, shows clearly how Saudi Arabia tramples women’s rights, and in the case the right to leave one’s country”, he added.

In a statement issued overnight HRW called on “Thai authorities should immediately halt any deportation, and either allow her to continue her travel to Australia or permit her to remain in Thailand to seek protection as a refugee”.

Reporting from airside at Suvarnabhumi Airport this morning, BBC SE Asia Correspondent Jonathan Head tweeted that Kuwait Airline Flight KU 412 had pushed back from the skybridge and that Ms al-Qunun was not on board. Her exact whereabout at the time of writing is unknown.

Update #2
At about 12:15 local time a video apparently showing Ms al-Qunun still inside the Miracle Transit Hotel was posted to Twitter, almost one hour after the scheduled departure of Kuwait Airline Flight KU 412 bound for Kuwait City.

Thailand’s MFA has been contacted to confirm that Ms al-Qunun remains detained in Thailand, and as to er whereabouts. A reply has not been received at the time of writing.

HRW has advised that Thai lawyers have filed an injunction with the Bangkok criminal court to prevent the deportation of Ms al-Qunun to Kuwait.

We have also been advised that Ms al-Qunun’s father, reportedly a governor in Saudi Arabia may also be on his way to Bangkok and arrive later tonight.

AEC News Today was advised by Ms al-Qunun via Twitter at 17:05 that the Bangkok criminal court had rejected an application by Human rights lawyer Nadthasiri Bergman to issue an order banning Ms al-Qunun’s deportation on the grounds that the application lacked sufficient supporting material. Ms Rahaf said she intends to appeal the court ruling.

The stand-off between Thai authorities and an 18-year-old Saudi Arabia asylum seeker barricaded inside an airport transit hotel could become more complex tomorrow with unconfirmed reports that the woman’s father is on his way to Bangkok.

Investigations by AEC News Today have found that the father of Rahaf Mohammed Mutlaq al-Qunun is a governor in Saudia Arabia, and a member of one of the country’s most powerful families, the tribe of Shammar.

A quick search on LinkedIn, however, found over 400 entries for members of the al-Shammari clan, with many of them holding senior government and private sector positions. AEC News Today was unable to independently verify the present location of Sheikh Mohammed bin Mutlaq al-Shammari

The discovery may shed some light on the extraordinary lengths Thailand immigration authorities have gone to to speedily remove Ms al-Qunun from the kingdom, and what appears to be breaches of airport security by Saudi Arabia and Kuwait diplomatic staff based in Bangkok.

Descendants of the ancient Tayy tribe of Yemen, the tribe of Shammar is described on Wikipedia as ‘one of the largest and most influential Arab tribes’ in Saudi Arabia. At its peak the tribe of Shammar ‘ruled much of central and northern Arabia from Riyadh to the frontiers of Syria and the vast area known as Al Jazira in Northern Iraq’, it says.

At a little after 20:00 local time, January 7, Ms al-Qunun left the Miracle Transit Hotel where she had barricaded herself in a room to avoid being forcibly returned to Saudi Arabia with staff from UNHCR Bangkok office and Thailand immigration head Lieutenant General Surachate Hakparn.

Khaosod English reported that Lieutenant Genera Hakparn had said that Thailand will allow her entry to the country for the purpose of being assessed for asylum by UNHCR. Thai police, he said, will provide Ms al-Qunun with additional personal protection.

Lieutenant General Hakparn had said earlier in the day that “If deporting her would result in her death, we definitely wouldn’t want to do that”. Responding to reports that Ms al-Qunun’s father was travelling to Bangkok, the immigration boss was quoted as saying “If she doesn’t want to go with her father, we cannot force her to go”.

This has been an AEC News Today breaking news story. No further updates will be made to this story.

Update: This story was last updated at14:15 on January 9: The spelling of Ms Alqunun’s name was changed to al-Qunun. Earlier updates included details of Ms Rahaf being taken into the care of UNHCR; details of her father; the results of an application before the Bangkok criminal court; information on a planned meeting between UNHCR, Thai immigration authorities and Ms al-Qunun; and information on legal filings; a video posted by Ms al-Qunun; and a report from the BBC.