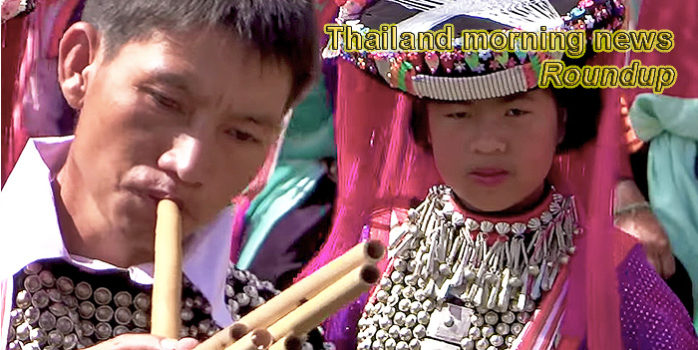 Government considers Plan B due to delays of budget disbursement
The Thai government’s economic team has been tasked, by Prime Minister Prayut Chan-o-cha, to work out a Plan B in case the already late disbursement of the fiscal budget is further delayed, possibly until the second quarter, by proceedings in the Constitutional Court to determine the legal status of the bill.
— Thai PBS News

PPRP blames machines for proxy voting
The Palang Pracharath Party (PPRP) on Thursday defended the proxy voting by its MPs after a video clip showed one of its lawmakers inserting more than one card during the budget bill vote.
— Bangkok Post

Thai protesters demand action as air pollution clouds Bangkok
Dozens of activists held a rare protest on Thursday over air pollution in Bangkok, a day after Thai officials closed schools due to concern over the impact.
— CNA

Farmers burning sugarcane face additional fees for milling their crop
Sugarcane growers, who burn their crops before harvesting, will be charged 30 baht/tonne for the burnt sugarcane delivered to sugar mills, while the mills will be levied 12 baht/tonne for accepting burnt cane exceeding the set limits.
— Thai PBS News

Thai government launches twelve step air pollution control plan in Bangkok
The government will be enforcing 12 measures addressing the air pollution crisis. The Prime Minister said the government has not been negligent over the issue, however the solution to this problem must be done step-by-step and receive cooperation from all sectors.
— The Pattaya News

Activist to Sue Land Officials for Letting Parina Off the Hook
A transparency activist on Thursday threatened to sue land officials for declining to pursue charges against a coalition politician accused of land encroachment.
— Khaosod English

“Online ordering portal could further promote the consumption of Thai imported goods”
The Thai Fresh Import company has been dealing with the import of fresh air cargo from Thai fields for many years now.
— FreshPlaza

Thailand plans new tax incentives to boost investment
Thailand’s finance ministry will submit to the cabinet on Tuesday a package of tax incentives to encourage investment, a deputy prime minister said on Thursday, as the government looks to revive a flagging economy.
— Reuters

Bangkok steps up its fight against plastic trash
TWO things Thailand is famous for are its delicious street food and its wonderful beaches.
— The Business Times

Government to address recurring floods and drought
Deputy Prime Minister Gen. Prawit Wongsuwan has instructed relevant state agencies to draft a plan for the integration of all water management functions for the next fiscal year and to address the recurring flood and drought problems nationwide.
— Newsline (video)

TAT organizes campaigns to promote tourism in NE region
The Tourism Authority of Thailand (TAT) has launched a campaign to stimulate tourism in the Northeastern provinces by setting up traveling themes, promoting the region’s gastronomy as well as greater utilize technology to facilitate travelers visiting the region.
— Newsline (video)

Decisive action ordered by Krabi governor after pack of dogs attacks 7-year-old American boy
The Governor of Krabi, Kitibodee Prawit, has ordered that large packs of stray dogs found in popular tourist hotspots be rounded up and dealt with following a dangerous attack on the son of an American tourist on Ao Siao beach last Saturday.
— ThaiExaminer.com

“Price of Thai coconuts is rising”
Coconuts are an important product in the Chinese market. Even when the weather is gradually growing colder, Chinese consumers still show a strong demand for coconuts.
— FreshPlaza

Fewer airborne fine dust particles in and around Bangkok today
The levels of PM2.5 dust in the atmosphere over Bangkok and its suburbs have fallen today (Thursday) to 27-66 microns, with 11 areas found to exceed the 50-micron safety threshold, according to the Pollution Control Department (PCD).
— Thai PBS News

Rina Tatematsu wins Thailand National Golf Qualifiers, moves on to take part in LPGA tour in Pattaya in February
Honda Automobile (Thailand) Co Ltd teamed up with the Sports Authority of Thailand (SAT) in organising The Honda LPGA Thailand National Qualifiers on January 21-22, in search of a Thai female golfer who would take part in the upcoming Honda LPGA Thailand 2020.
— The Pattaya News

Where to Welcome Year of the Rat in Bangkok
Whether you’re into snacking on deep fried pork while watching Chinese acrobats and lion dances, sipping on craft cocktails in your bespoke qipao, or cheering to teen girl idols, there’s something for everyone in Bangkok for Chinese New Year this Saturday.
— Khaosod English

Prasitthichai speaks to the Thai media, “killings were unintentional”
In a bizarre sequence of events, Thai media were able to directly question the suspect, who has allegedly confessed, of the cold-blooded murders of three, whilst injuring four others, on January 9 at a Lop Buri gold shop.
— The Thaiger

SCB out of favour among analysts as bad loans rise
Siam Commercial Bank Plc, one of Southeast Asia’s largest lenders, has fallen out of favour with securities analysts after reporting fourth-quarter results that raised concerns about loan quality.
— Bangkok Post

Bangkok Government asks residents to limit burning of items for Chinese New Year to reduce air pollution, on alert for fire hazards
Thai-Chinese communities in Thailand will be celebrating the Chinese New Year this weekend, during which many candles and much incense will be lit, along with the ritual burning of gold and silver paper, any of which could pose a fire hazard and a source of air pollution.
— The Pattaya News

Scholar Fears Massive Renovation of Iconic Avenue May Erase History
Works are underway to tear down buildings along a 1,200-meter stretch of the iconic Ratchadamnoen Avenue and rebuild them under a new architectural style per orders from the Crown Property Bureau, who owns the land.
— Khaosod English

Man survives drive-by shooting and crash, credits his Buddhist amulet
A Pattaya man who was fired upon and crashed into a power pole early yesterday morning is thanking his lucky Buddha and crediting his Buddhist amulet with saving his life.
— The Thaiger

Unsecured pickup rolls off ferry into the sea
The owner of an inter-island ferry has agreed to compensate the owner of a pickup truck that slid off the boat and into the sea.
— Bangkok Post

Will there be more twists in gold shop killings?
Everyone following one of the most brutal and deadliest robberies in recent Thai history was expecting anything but what has actually been panning out.
— Thai PBS News

Electric vehicle registrations in Thailand rose 380% in 2019
Electic cars (EVs) are on the rise in Thailand. The Electric Vehicle Association of Thailand (EVAT) reports a sharp increase in the number of electric vehicles registered in 2019.
— The Thaiger

Top 10 islands to visit in Thailand (2020)
Thailand is famous for its outstanding island experiences and there are many to choose from. From sweeping stretches of clear golden sands to islands where you can dive, snorkel and stay, Thailand’s islands and beaches are as diverse as they are plentiful. Here is our Top 10 choices.
— The Thaiger