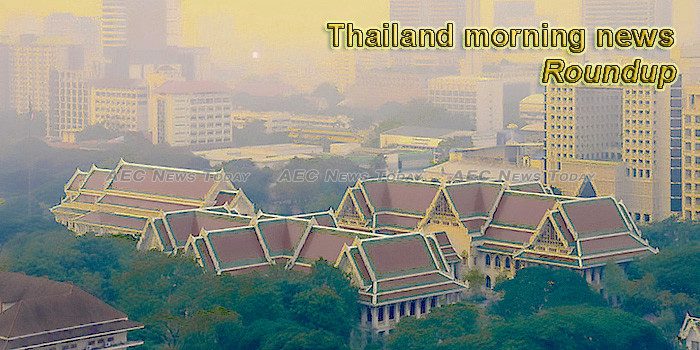 PM searching for haze solution
The use of more environmentally friendly B20 biodiesel and temporary school closures in critically haze-affected areas are among various proposals pitched by Prime Minister Prayut Chan-o-cha as the government ramps up efforts to tackle fine dust particles that have blanketed Bangkok.
— Bangkok Post (annoying popups)

Thailand must postpone election again, until March: Officials
Thailand’s long-delayed general election to end military rule will have to be postponed from its Feb 24 date and will likely be held in March, two officials in the Election Commission said on Tuesday (Jan 15).
— Channel NewsAsia

Toxic smog settles in for long haul
BANGKOK RESIDENTS will have to put up with smog until early March, as high levels of PM2.5 particles is expected to settle over the capital for many more weeks.
— The Nation (very annoying popups)

Group sets Friday deadline to govt for election date, vows to up the ante with rallies
WITH THE government failing to fix the date for the election and pushing for it to be delayed by a month, pro-election groups are rallying for a show of strength both in and out of Bangkok to put pressure on the ruling junta.
— The Nation (very annoying popups)

Air force planes spray water to lessen smog
The Air Force has deployed BT-67 aircraft to spray water to alleviate the effects of the current smog over Bangkok.
— NNT

Ministry targets factories
The Industry Ministry has ordered all agencies under its umbrella to set stricter measures governing factories producing high levels of fine dust in Bangkok, and it plans to take legal action against any…
— Bangkok Post (annoying popups)

Car sales in worst slump since ’98
VEHICLE sales in the Philippines fell by 16 per cent last year, the worst full-year decline since the financial crisis in 1998. Members of two large automotive groups in the country sold 357,410 units last year, much less than the 425,673 units sold in 2017.
— The Nation (very annoying popups)

Thailand:Insurance market sees stable growth of around 5%
The Thai insurance industry is estimated to have generated an annual total insurance premium of THB862.1bn ($27bn) last year, growing by 5.3% over 2017, according to the Office of Insurance Commission (OIC).
— Asia Insurance Review

Delay urged to new e-commerce tax rule
THE Indonesian e-Commerce Association (idEA) has called on the government to postpone the implementation of a new tax regulation for e-commerce companies, fearing that unprepared taxpayers and unequal treatment could deter growth.
— The Nation (very annoying popups)

Populist curse hangs over Thai economy as public awaits election
A nostalgic farmer in northeastern Thailand symbolizes how populism has gummed up the gears of the economy — a pressing challenge for whatever government emerges from the country’s highly anticipated general election.
— Nikkei Asian Review (paywall)

Govt to create data centre to help farm supply match demand
THE OFFICE of Agricultural Economics (OAE) will work with other government agencies to develop a data analytics system as part of the governmentâs effort to upgrade the management of Thailandâs farm sector.
— The Nation (very annoying popups)

Gen Prawit orders narcotics crackdown at northern border
The Deputy Prime Minister for security affairs has ordered law enforcement agencies based in the North of Thailand to crack down on illegal drug trafficking at the border.
— NBT World (video)

Air force planes spray water to lessen smog
The Air Force has deployed BT-67 aircraft to spray water to alleviate the effects of the current smog over Bangkok.
— NNT

Brighter prospects for e-commerce
Thanks to the growing popularity of online shopping in Thailand, e-commerce is expected to have the brightest growth prospects this year, while book rental, handicraft and conventional furniture are forecast…
— Bangkok Post (annoying popups)

Private hospitals push back against regulation to list actual cost of supplies & services
The Private Hospital Association of Thailand has reported that its member institutions have been unable to abide by a regulation, which requires private hospitals to disclose the cost of essential supplies and services.
— NBT World (video)

‘Election a key factor’ in 2019 growth
THAILAND’S economic growth in 2019 will hinge on the upcoming election, according to a Krungthai Bank expert.
— The Nation (very annoying popups)

Family calls for capital punishment if man convicted of murder spree
RELATIVES AND FRIENDS yesterday called for the death penalty to be handed down to murder suspect Teerapol Pin-amorn following his arrest in the border province of Ranong for killing five members of his family.
— The Nation (very annoying popups)

Rights activists push for ban on death sentences for female convicts
HUMAN RIGHTS defenders are calling for an end to capital punishment for women as a next step forward to achieving the universal abolition of death sentences in Thailand.
— The Nation (very annoying popups)

NACC pledges fight against graft
Thailand’s Office of the National Anti-Corruption Commission (NACC) is implementing its 20-year Anti-Corruption Master Plan (2017-2036), aimed at promoting concerted cooperation among all sectors of society in preventing and suppressing corruption, as well as developing a “Zero Tolerance and Clean Thailand.”
— NNT

Doctors warn trippers of severe danger of using LSD-laden ‘deadly stamps’
Doctors have warned tourists and party-goers of the danger of ‘deadly stamps’, as the illicit drug is becoming popular among nightlife visitors to Koh Pha-Ngan.
— The Nation (very annoying popups)

Mobile cabinet meeting begins in Chiang Mai
The Prime Minister has joined members of his Cabinet on a two-day visit to the upper northern provinces of Chiang Mai and Lampang where mobile Cabinet meetings are to take place.
— NBT World (video)

Model claiming Trump secrets to be deported
A Belarusian model who claimed she had proof of Russian efforts to help Donald Trump win office was set to be deported after being convicted Tuesday nearly a year after her arrest in Thailand for participating in a “sex training course”.
— Bangkok Post

Golden mermaid brings tourists back to Songkhla
The Golden Mermaid statue is drawing tourists to Thailand’s southern province of Songkhla as lives return to normal after Tropical Storm Pabuk.
— NNT

Fugitive wanted for murder of wife and in-laws captured
A 37 year old man wanted for the murder of his wife, her parents and two other in-laws in northern Uttaradit province on Sunday was caught near the Myanmar border in this southern province on Tuesday morning.
— Bangkok Post

Czech PM visiting Thailand this week
Prime Minister of the Czech Republic Andrej Babis is leading an official and business delegation to Thailand on January 15-17, 2019 to strengthen relations and deepen economic cooperation between the two countries.
— NNT

Monk accused of sex with minor caught 11 years later
A 61-year-old monk wanted for sexually abusing a 14-year-old girl was arrested at a temple in Bang Bua Thong district on Tuesday after 11 years on the run.
— Bangkok Post