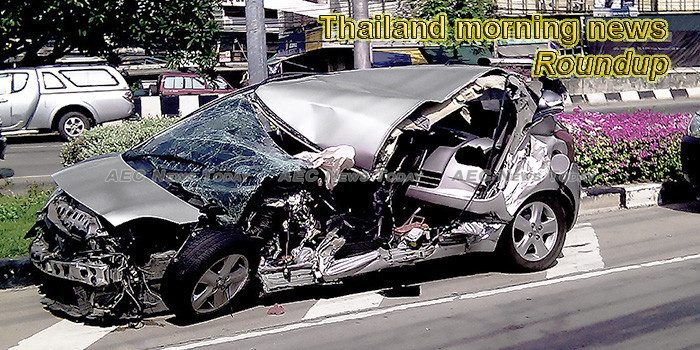 Thai politicians gear up for first election since military coup
After four years in which political speeches, meetings and even putting up party posters were punishable offences, Thai electoral politics are powering back to life ahead of a poll in February.
— Financial Times

REPORT: Thailand paying the price for eco-sluggishness as controversial environmental issues rise
The world is so interconnected, so changes imposed on the environment in Thailand – and the value Thais attach to ecology – cannot be viewed separately from what’s happening elsewhere.
— The Nation (annoying pop-ups)

CAAT officials probe cause of light-aircraft crash that took life of South African pilot
Civil Aviation Authority of Thailand (CAAT) officials on Monday inspected the wreckage of a private light aircraft that had crashed in Chon Buri’s Sri Racha district on Sunday afternoon, causing a blaze that killed the 60-year-old pilot, Mike Romberg from South Africa, at the scene.
— The Nation (annoying pop-ups)

30% rise in drink driving incidents
Despite all the hoopla, promises, checkpoints on all major roads and extensive media campaign, drink driving remains the leading cause of accidents over the first three days of the New Year holiday road safety period – aka. The Seven Days of Danger.
— The Thaiger

Police seek to identify bodies stuffed with concrete
Police on Monday were trying to identify the bodies of two men dumped into the Mekong River with concrete placed inside their ruptured bellies.
— Bangkok Post

Rice exports tipped to fall as rivalry bites
Expectations for the country’s rice exports next year have been scaled back in the face of intense competition from fellow producers.
— The Nation (annoying pop-ups)

BoT hopeful of Q4 GDP boost
The country’s positive economic momentum was likely maintained during the fourth quarter of 2018, helping full-year growth stay on track as forecast, says a senior official at the Bank of Thailand.
— Bangkok Post

Bid to impeach NACC gathers pace
The petition to impeach the National Anti Corruption Commission (NACC) is expected to be completed by the middle of next month, said activist Srisuwan Janya.
— Bangkok Post

Asian leaders hurl populist policy firepower ahead of elections
Asia’s political calendar will be busy in 2019, with India and Indonesia, two of the region’s largest democracies, as well as Thailand, heading to the polls.
— Nikkei Asian Review (paywall)

Pheu Thai seeks pact with Democrats
The Pheu Thai Party might not win enough seats in the next election and has offered to join forces with arch rivals the Democrats in forming the next government, according to comments made by a core member of the party.
— Bangkok Post

Media marred by ‘interference’
The media can’t seem to catch a break in 2018, as press freedom continues to suffer under the regime’s strict regulation and an ongoing shift in consumer behaviour as the world moves into the digital age, according to the Thai Journalists Association (TJA).
— Bangkok Post

Poll shows people happy with government’s performance, in favour of Prayut’s return as PM
Thirty-nine percent of more than 2,000 respondents in the latest opinion poll are satisfied with the performance of the Prayut government and the National Council for Peace and Order in peace restoration and in dealing with dark influence and human trafficking.
— Thai PBS World

Alcohol Control Law will be strictly enforced
The National Alcoholic Beverage Policy Committee declared that all relevant agencies have to proceed with the strict enforcement of the Alcohol Beverage Control Law to reduce the number of road accidents during New Year celebrations.
— Pattaya Mail

Heightening crypto exposure collaboratively with NEXUS and Bitkub in Thailand
In a joint effort to increase crypto exposure and accessibility for traders in the Thailand, Broctagon NEXUS, a global crypto liquidity aggregator and Bitkub, a leading Thailand-based cryptocurrency exchange, have partnered to introduce deeper liquidity and innovative trading instruments.
— Traders Magazine

Working the future hustle
The labour market has seen a largely unexceptional year, but buried in the overall picture are details that indicate what the future bodes,
— Bangkok Post

Bright sparks amid a bleak year for Thailand
Military-backed elite have tightened their grip on power, but cave drama showed citizens can come together.
— The Nation (annoying pop-ups)

Call for compensation, payments to staff working at Health Promotion Hospitals in Deep South
The Southern Border Provinces’ Public Health Personnel Federation has condemned the seizure of Ban Kanua Health Promotion Hospital by insurgents to launch a gun and grenade assault on the nearby civilian defense volunteer base in Tambon Kalisa, Narathiwat’s Rangae district on the evening of December 28.
— The Nation (annoying pop-ups)

No serious damage from Kanchanaburi tremblors
Officials on Monday gave assurances that two dams withstood an earthquake and two aftershocks with 1.6-4.9-magnitudes in Kanchanaburi from Sunday night to Monday morning, saying the impacts were far below the limit of their durability.
— Bangkok Post

Thailand’s extreme weather a wake-up call–experts
The world needs to be prepared for more extreme weather events in future after disasters caused by climate change inflicted losses running into many billions of dollars in 2018, according to a study.
— The Nation/ Inquirer.net

Thailand welcomes 2019 with Countdown parties, fireworks
Heavy Countdown crowds and fireworks kicked off 2019 at dozens of Countdown venues around Thailand, and a bright pink pig at Bangkok’s Siam Centre was a reminder of this year’s animal.
— Bangkok Post

Chiang Mai soldier caught in ‘gun road rage’
Footage from a dash cam shows a soldier with a gun advancing on a family of three, apparently threatening to shoot them in Chiang Mai on Monday.
— The Nation (annoying pop-ups)