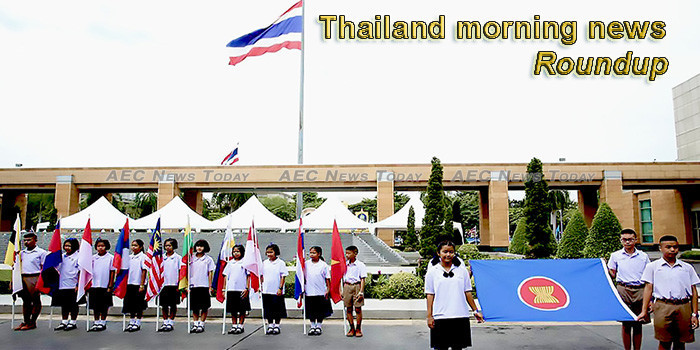 PM ‘won’t quit’ over oath
A government spokeswoman has played down rumours that Prime Minister Prayut Chan-o-cha may quit after apologising for not completing the oath of office during last month’s cabinet swearing-in ceremony.
— Bangkok Post

Thai Consumer Confidence Index for July lowest in 22 Months
A Thai academic thinktank on Thursday said in Bangkok that Thailand’s consumer confidence index in July dropped to its lowest in 22 months amid concerns over economic problems, political instability and the U.S.-China trade friction.
— Xinhuanet

Business group calls for more easing
The central bank should cut its policy rate further to help ease upward pressure on the baht, which has stayed strong despite Wednesday’s surprise rate cut, the head of the Thai Chamber of Commerce said on Thursday.
— Bangkok Post

Illegal loggers lay landmines to deter forest rangers in Si Sa Ket
Illegal loggers have resorted to the use of landmines to kill or maim forest rangers who try to interfere with their pursuit of the highly-prized Payoong, or Siamese Redwood trees in Thailand’s forest reserves, according to the public relations office of the Department of National Parks, Wildlife and Plant Conservation today.
— Thai PBS News

Confidence at lowest ebb since 2017
Consumer confidence fell to the lowest point in 22 months in July, on concerns about the economic slowdown, political instability, the US-China trade war, and relatively low farm prices.
— Bangkok Post

Thai Police Charge Men with Attempted Murder in Wake of Bangkok Blasts
Police filed attempted murder charges Thursday against two men from Thailand’s insurgency-wracked Deep South for allegedly planting a device that did not explode outside national police headquarters, hours before a series of minor bombs exploded in Bangkok on Aug. 2.
— Benar News

Thai crew stranded at sea off coast of Somalia set to return to Thailand
Officials have been dispatched to rescue Thai laborers who were allegedly tricked into working on board fishing vessels and deserted by their employers off Somalia’s shore. The first batch of crew are scheduled to travel back to Thailand tomorrow (August 9th).
— NBT World

Baht shrugs off rate cut
The baht is defying the conventional wisdom that an interest-rate cut spurs weakness in a currency.
— Bangkok Post

Thai transport minister agrees to taxi fare hikes in Bangkok
The Ministry of Transport has given approval for taxi fares in Bangkok to go up within a month. Transport Minister Saksayam Chidchob met with representatives of four Bangkok taxi groups and officials of the Land Transport Department to discuss demand by taxi drivers to hike taxi fares.
— The Thaiger

Government gets first taste of defeat in lower House
The government suffered its first defeat in the lower House today over a parliamentary regulation that would specify the House speaker’s impartiality in the performance of his or her duty.
— Thai PBS News

Police Chief admits to difficulties in solving the recent bombings
Thailand’s national police chief admitted today that it was difficult for the police to track down the real masterminds behind the bombings and arson attacks in Bangkok and neighboring Nonthaburi province, even though the police have arrested two suspects.
— Thai PBS News

TCC wants looser monetary policy
The Thai Chamber of Commerce (TCC) has urged the Bank of Thailand to further ease monetary policy as a means to rein in the baht, while the Federation of Thai Industries (FTI) requested the central bank launch mid and long-term measures to stabilise the currency’s movement.
— Bangkok Post

Lazada ties up with GroupM to bolster eCommerce solutions in Thailand
Lazada Thailand has partnered with GroupM Thailand to create a holistic ecosystem for LazMall brands grow its sales on the eCommerce platform.
— Marketing

Govt mulls QR code to improve taxi rides
The Department of Land Transport announced a plan to roll out a QR-code-based complaint filing system for taxis to improve passenger service standards, one day after it approved the proposal to raise taxi fares.
— Bangkok Post

Taxi fares up 50 satang
The Ministry of Transport has approved a taxi fare hike by 50 satang over the distance between one to ten kilometers, starting September in order to offset increasing costs for drivers.
— NBT World

Police reveal little about bombing motivation
A series of bombings in Bangkok last week may be linked to politics, police said on Thursday as authorities hunted for more than a dozen suspects in connection with the attacks.
— Bangkok Post

Japanese man arrested by Thai Immigration police for alleged sex with underage girls
A 69 year old Japanese businessman has been arrested by police in Khon Kaen for allegedly having sex with at least three teenagers, multiple times.
— The Thaiger

Boogie time: Thai minister loosens up for cannabis presentation
Thailand’s public health minister and his top bureaucrats danced along to pop tunes ahead of a news conference called to present the first batch of cannabis oil produced by a state-owned pharmaceutical company on Wednesday (Aug 7).
— CNA

Marine Dept to supervise vessels during rehearsals of Royal Barge Procession
The Marine Department has announced that vessel traffic along the Chao Phraya River is being supervised from Monday (Aug 5) to Friday (Aug 9) to facilitate rehearsals of the Royal Barge Procession, as part of nationwide celebrations of His Majesty King Maha Vajiralongkorn Phra Vajiraklaochaoyuhua’s coronation earlier this year.
— Pattaya Mail

Speeding up “political cases” is double-edged sword
If the Prayut government was a man with a weak heart, legal cases involving opponents of the administration were strong pills, which aren’t necessarily good for someone not in perfect conditions.
— Thai PBS News

TMB-Thanachart merger signing next week
TMB Bank and Thanachart Bank (TBank) are set to sign a merger agreement by next week as all key details have already been settled, says a source familiar with the deal.
— Bangkok Post