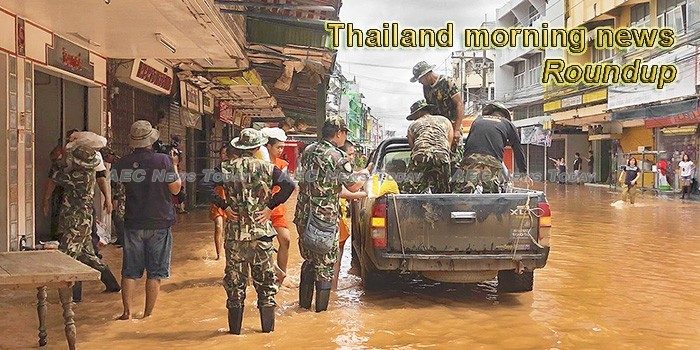 Export growth forecast raised to 10% by NESDB
FORECAST growth in exports has been raised to 10 per cent for this year by a government think tank, which is sticking with an estimate for national economic expansion of 4.2-4.7 per cent.
— The Nation

Foreign tourist arrivals grow 11% over first 7 months of 2018
Thailand’s Ministry of Tourism and Sports has revealed that the number of foreign visitors in the first seven months of the year has grown by 11% from last year, while the number Chinese tourists is beginning to recover following the fatal Phuket boat accident last month.
— NNT

Ballooning household debt will slow Thailand’s growth
Consumer borrowing is accelerating significantly in Thailand and around a quarter of consumers are having trouble making repayments on their debts, with credit cards and car loans the main areas of concern, according to an FT Confidential Research survey.
— Nikkei Asian Review (paywall)

NESDB sticks to economic growth forecast of 4.2-4.7% after good first half
The National Economic and Social Development Board has maintained its forecast for the country’s economic growth this year at between 4.2 per cent and 4.7 per cent, after witnessing expansion of 4.8 per cent in the first half, office secretary-general Thosaporn Sirisumphand said on Monday.
— The Nation

Thais rake in more medals in Indonesia
Thai athletes kept the scoreboard ticking at the 2018 Asian Games in Indonesia, adding one silver and three bronze medals to their haul Monday.
— Bangkok Post

Talks on with M’sia over arrest of Thai police
THAILAND and Malaysia offered differing accounts of an incident off Satun province on Sunday, in which four Thais, including three police senior sergeant-majors, were arrested and accused of robbing Malaysian fishing boats.
— The Nation

Bank of Thailand chief strikes hawkish tone
The central bank governor struck a hawkish tone after robust economic growth data on Monday, saying officials are waiting for the right time to consider what would be the first interest-rate hike since 2011.
— Bangkok Post

Sukhothai city centre braces for flooding
Massive runoff from the North which is likely to hit Sukhothai tomorrow has forced officials into taking emergency steps to protect the province’s city centre by keeping the water level of the Yom River low and using ponds to retain the deluge.
— Bangkok Post

TCEB pushes Thailand as a hub for modern agriculture
Thailand set to host two major agricultural business events which feature smart technologies during 22-24 August 2018. Attracted by Thailand Convention and Exhibition Bureau (Public Organization) or TCEB, these events will underscore the country’s leading position in the world’s agriculture sector and are expected to attract up to 20,000 international delegates coming to explore agricultural innovations displayed under one roof.
— AEC News Today/ PR Newswire (media release)

Politics ban ‘to be eased next month’
The next general election is to be scheduled sometime between Feb 24 and May 5 with the ban on political activities to be partially lifted, most probably beginning from next month to lay the groundwork for the poll, according to Deputy Prime Minister Wissanu Krea-ngam.
— Bangkok Post

Election could be held between February and May: Wissanu
FEBRUARY 24 will be earliest date when the next general election can be held and full resumption of political activities will be allowed no earlier than 150 days before the vote, Deputy Prime Minister Wissanu Krea-ngam said yesterday after meeting with the new Election Commission (EC) members.
— The Nation

Chiang Mai school’s hands-on policy has its young students flourishing
“TAKE ME to your heart. Take me to your soul. Give me your hand before I’m old Show me what love is – haven’t got a clue Show me that wonders can be true…,” croons a 15-year-old in front of his school’s important visitors this week.
— The Nation

Thailand weather situation update 20 August 2018
The Tourism Authority of Thailand (TAT) would like to provide an additional update regarding the weather situation in the country, following our latest announcement released on 16 August, 2018, that encourages travellers to check weather updates during the current monsoon season.
— TAT News

Thailand drops as country Chinese feel most welcomed
Thailand and Japan have swapped their top positions as the countries Chinese travellers felt comfortable visiting in the latest survey by Hotels.com.
— Bangkok Post

Authorities redoubling efforts to legalise Lao workers in Thailand
All Lao workers who return home to register with the authorities will need to get work permits and passports from labour officials so they can legally work in Thailand.
— The Nation

WHAUP ups pace of solar rooftop investment
WHA Utilities and Power (WHAUP) is racing forward with its solar-rooftop investment plan, targeting to complete an additional 2.6 megawatts of installed capacity during the current quarter.
— The Nation

Suthep pleads his case with the NACC
Ex-protest leader and former deputy premier Suthep Thaugsuban insisted Monday he was innocent of graft in a 5.8-billion-baht project to construct police flats and police stations in 2009.
— Bangkok Post

Phuket pushes to splash B508mn on marine safety
Phuket Governor Norraphat Plodthong will request a budget of more than half a billion baht from the national government to splash out on improving marine safety.
— The Phuket News

Thailand upgrading talent to be SEA’s next tech hub
A mismatch of talent is slowing down the government’s ability to drive Thailand 4.0 ahead; but initiatives are being put in place to upgrade the workforce.
— OpenGov

Thai 1800-MHz auction attracts just two bids
Thailand’s second attempt to auction 90 MHz of 1800-MHz spectrum was only marginally more successful than the first, with only two of the nine blocks of spectrum sold.
— telecomasia.net

Pakistan thrash Thailand 10-0 in Asian Games hockey opener
Pakistan were off to a flying start at the Asian Games Hockey with a 10-0 win over Thailand on Monday.
— Geo News

Bitcoin suspect says he was duped
The Crime Suppression Division (CSD) shrugged off a famous stock investor’s claim that he was not the co-conspirator but rather the victim of a bitcoin (BTC) scam on Monday, saying investigators would consider the evidence and not specula
— Bangkok Post