Singapore morning news for May 9 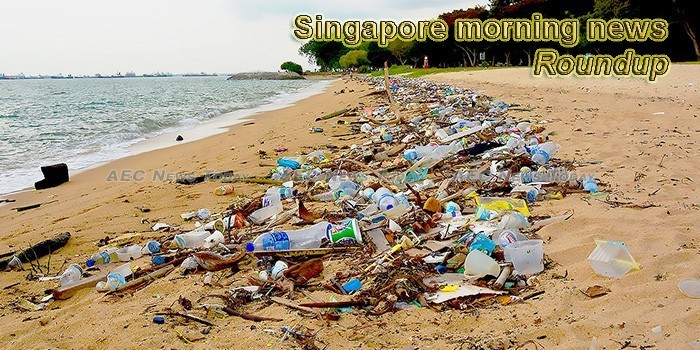 164,000 Singaporean adults living in private housing have no declared income
About 164,000 Singaporeans live in private properties and do not declare income for the purpose of personal income tax here, said Second Minister of Finance Indranee Rajah on Wednesday (May 8).
— CNA  (very annoying popups)

Singapore opposition joins backlash against proposed fake news law
Singapore’s lone opposition party in parliament has said it will oppose a controversial fake news bill that has been criticised by rights groups, journalists and tech firms as a debate over the proposed legislation entered a second day on Wednesday.
— The Edge Singapore

MAS’ S$45b transfer to GIC could give government revenues a boost
THE Monetary Authority of Singapore (MAS) will be transferring S$45 billion from the official foreign reserves (OFR) in May to GIC, the city-state’s sovereign wealth fund, to manage, in a move economists say is necessary to ensure adequate sustainable return on investments in the current protracted …
— The Business Times

‘Very onerous’ process to challenge order on content deemed as online falsehood: Sylvia Lim
Individuals appealing against a correction or take-down direction under the proposed law against online falsehoods could find the process “very onerous”, said Workers’ Party (WP) Member of Parliament (MP) Sylvia Lim in Parliament on Wednesday (May 8), adding that it is up to the individual to prove that his statement was true.
— CNA  (very annoying popups)

MAS’ S$45b transfer to GIC could give government revenues a boost
THE Monetary Authority of Singapore (MAS) will be transferring S$45 billion from the official foreign reserves (OFR) in May to GIC, the city-state’s sovereign wealth fund, to manage, in a move economists say is necessary to ensure adequate sustainable return on investments in the current protracted low inflation and interest rate environment.
— The Business Times

Financial Supermarket GoBear Announces US$80 Million in Funding
Asian financial supermarket GoBear has announced US$80 million in funding to date. GoBear will use the funds to drive growth through product and technology enhancements, expand its partner network, and fill key roles.
— AEC News Today/ PR Newswire

Singapore’s embattled Hyflux dodges judicial management process
Singapore’s embattled water treatment company Hyflux Ltd. has staved off an attempt by lenders to have independent managers run the company, avoiding a process that has dragged on for some of the nation’s troubled firms.
— The Star Online

Lam Pin Min: Town councils can ban PMDs, set own rules for their usage on void decks
Singapore– In Parliament on Tuesday, May 7, the Senior Minister of State for Transport, Lam Pin Min said that it is up to town councils to formulate and implement their own rules concerning the usage of personal mobility devices (PMDs) on void decks, including banning them outright for the sake of safety.
— The Independent

Who Gets to Define Fake News? In Singapore, a Debated Question
Singapore’s ruling party defended its planned bill to combat “fake news” amid continued debate about who gets to define what’s true and false.
— Bloomberg (paywall)

Netizens displeased after hearing POFMA will be applied on closed platforms like chat groups and social media groups
Senior Minister of State for Law Edwin Tong said in Parliament on Tuesday (7 May) that the proposed Protection from Online Falsehoods and Manipulation Bill (POFMA) will cover closed communications platforms such as private chat groups and social media groups, as well as those with end-to-end encryption that only permits messages to be exchanged between senders and receivers.
— The Online Citizen

Proposed law against online falsehoods will not curb academic research: Ong Ye Kung
The Education Minister gave the assurance in parliament that the proposed legislation will not strip researchers of their academic freedom.
— CNA  (very annoying popups)

Duke-NUS Medical School study shows more adults over 60 suffering from chronic diseases, struggling with daily activities
A new study is showing that the proportion of people over the age of 60 who have three or even more chronic diseases almost doubled from 2009 to 2017.
— The Independent

Law Minister K Shanmugam addresses concerns over proposed online falsehoods and manipulation law
Law and Home Affairs Minister K Shanmugam addressed criticism of the Protection from Online Falsehoods and Manipulation Bill in a parliamentary speech on Tuesday (May 7), saying while there is nothing wrong with questioning whether the powers given to the Government could be abused.
— CNA  (very annoying popups)

Tuning in to S’pore at Venice Biennale
The humble recorder is taking centre stage at the Singapore pavilion at the Venice Biennale. Recorder Rewrite, a film installation by artist Song-Ming Ang and curator Michelle Ho, is the centrepiece of the pavilion – launched today by Mr Baey Yam Keng, Senior Parliamentary Secretary for Transport, and Culture, Community and Youth.
— Straits Times (annoying popups)

PH, Singapore celebrate 50 years of diplomatic relations
The Philippines and Singapore on Wednesday jointly unveiled the official commemorative logo of the 50th anniversary of the two countries’ diplomatic relations, symbolizing the start of year-long activities to be held in both Manila and the Lion City.
— Manilla Bulletin

4 F&B outlets set to reopen tomorrow after stand-off ends
A stand-off over rent between the landlord of Singapore Land Tower and four food and beverage (F&B) establishments was resolved yesterday. About 50 staff are set to move back to their workplaces in the 48-storey skyscraper in Raffles Place.
— Straits Times (annoying popups)

Singapore makes it illegal to send unwanted nudes
Singapore has become one of the first countries to outlaw the sending of unsolicited lewd photos, or “cyber flashing,” as governments and companies around the world seek to curb new forms of harassment enabled by technology.
— Ink Stones News

Airbnb-style short-term home sharing still illegal: URA
THE decision by the Urban Redevelopment Authority (URA) to keep the status quo for short-term stays in private homes has likely triggered a collective sigh of relief from among hospitality players, who have seen their business eaten into.
— The Business Times

Tharman urges firms to invest in more green innovations
A sustainable future cannot be left solely to a passionate younger generation in tune with the green movement; those who hold the reins of companies also need to act.
— Straits Times (annoying popups)

Singapore’s UOB launches utility marketplace
UOB is spreading its wings into the comparison market thanks to recent Monetary Authority of Singapore rules which allow banks to operate digital platforms that match buyers and sellers of consumer goods and services.
— Fin Extra

Institutional Investors Have Been Buying These 2 Billion-Dollar Singapore REITs
Institutional investors can give investors ideas. Here are two REITs institutions have been buying recently in Singapore.
— The Motley Fool

Pritam Singh: Allowing Government to open itself up to scrutiny on peddling falsehoods can strengthen trust
Workers’ Party Chief and Member of Parliament Pritam Singh spoke in Parliament on Tuesday (7 May) about the decision to create an exemption for the Government such that it cannot be sued for perpetuating a falsehood, in regards to the Protection against Harassment Act (POHA), is a glaring omission and a lost opportunity at winning the trust of the public.
— The Online Citizen

Singapore Spreads the Wealth
Singaporeans may be in line for some good news. The central bank’s decision to transfer S$45 billion ($33 billion) to the island’s sovereign wealth fund could push back an increase in the consumption tax.
— Bloomberg (paywall)

HSA’s recall of high blood pressure drugs: More than half of affected patients have switched to alternative medicines
The Ministry of Health (MOH) has helped more than half the patients affected by the recall of three brands of high blood pressure drugs switch to alternative medicines, said Senior Minister of State for Health Lam Pin Min in Parliament on Wednesday (May 8).
— CNA  (very annoying popups)

NEA reveals new ‘eye-catching’ CWO vests to deter litterbugs
Drop rubbish in Singapore and you might be dropping any fashion credibility you ever had.
— Asia One

Singapore Morning News For May 11