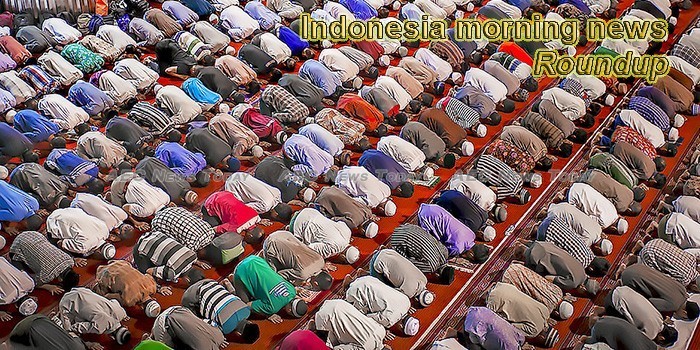 Watch: Indonesia blows up pirate fishing boats after navy ship rammed (video)
When a Vietnamese coastguard patrol boat was caught on video last month ramming an Indonesian Navy vessel off the coast of Borneo there were no prizes for guessing that it was not going end well… for Vietnam.
— AEC News Today

FROM THE FIELD: ‘Race is on’ to halt biodiversity loss in Indonesia
The trade in wildlife in the South-East Asian country, which is estimated to be worth up to US$1 billion a year, has already led to the extinction of some animal species and disrupted the region’s ecological balance.
— UN News

Jokowi: Indonesia will Become a Developed Nation in 2045
President Joko “Jokowi” Widodo expressed his optimism towards Indonesia becoming a fully-developed nation. The President hoped to rank Indonesia as the world’s fourth best country in 2045.
— Tempo.co

Cybersecurity for Indonesia: what needs to be done?
Indonesia, a country with the fourth-largest growth in internet users in the world , is facing both great opportunities as well as significant threats with the development of digital technology and internet.
— Mena Fn

Peace not on horizon in Asean’s fishing wars
Indonesia’s decision to sink a dozen fishing boats on Saturday is a reminder for Asean that illegal fishing is a serious region problem that requires concrete solutions, not more meetings and lip service.
— The Phnom Penh Post

Indonesian elections: Widodo holds his position
Over 190 million Indonesians went to the polls on April 17 to vote on the continuation of Joko Widodo’s leadership or to let his rival, Prabowo Subianto, run the largest economy in the Association of Southeast Asian Nations (ASEAN) and the world’s third-largest democracy.
— Daily Sabah

Rupiah forecast to weaken over escalation of trade war
The rupiah exchange rate traded among banks in Jakarta on Thursday is forecast to fall further, as the trade war between the United States (US) and China ricochets.
— Antara News

Five Indonesian provinces complete 2019 vote tally
Five out of 34 provinces in Indonesia have wrapped up vote tabulation for the April 17 general election, the General Elections Commission (KPU) has said.
— The Jakarta Post

Transportation Minister: Plane Ticket Price 15 Percent Cheaper
Transportation Minister Budi Karya Sumadi said that the ceiling price for plane tickets will be lowered by 15 percent. “Yes, within that range. We’ll finalize on Monday,” Budi said at the Presidential Complex on Thursday, May 9, 2019.
— Tempo.co

A New Level Of Luxury Cruising Is Coming To Indonesia And The Amazon
Raja Ampat is renowned as one of the most remote and startlingly beautiful sailing locations in the world, an archipelago of hundreds of islands in eastern Indonesia dotted with coral reefs, beaches and jungles containing a range of wildlife from 1500 types of tropical fish to over 300 species of birds.
— Forbes

Flights from Bandung to outside Java to be relocated to Kertajati Airport
To help the underperforming Kartajati International Airport in Majalengka, West Java, stakeholders, including the management of Husein Sastranegara Airport in Bandung, gathered on Tuesday in Jakarta at a meeting organized by the Transportation Ministry.
— The Jakarta Post

Indonesia president says to go all out in second term to boost economic reform
Indonesian President Joko Widodo pledged on Thursday (May 9) to slim the government during his second term and cut red tape hampering investment to achieve an ambitious growth target in Southeast Asia’s biggest economy by 2045.
— CNA (very annoying popups)

“Natural decline” a challenge to 2019 production, says SKK Migas
Indonesia is finding it challenging to reach this year’s oil and gas lifting target, as the oil depletion rate – or “natural decline” – was higher than projected, the Upstream Oil and Gas Regulatory Special Task Force (SKK Migas) has said on Wednesday.
— The Jakarta Post

Indonesia should probe deaths of election staff – parliament deputy
A top Indonesian lawmaker has demanded a parliamentary inquiry into the deaths of more than 500 officials during recent elections, most of them linked to fatigue-related illnesses in gruelling work conditions.
— Euro News

MRT Jakarta to Implement Normal Tariff on May 13
PT Mass Rapid Transit or MRT Jakarta management has announced that the MRT normal tariff will be applied on Monday, May 13.
— Tempo.co

Indonesia’s Jokowi to go all out in second term to boost economic reform
Indonesian President Joko Widodo pledged on Thursday to slim the government during his second term and cut red tape hampering investment to achieve an ambitious growth target in Southeast Asia’s biggest economy by 2045.
— Free Malaysia Today

Boeing struggling with Mt. Everest PR challenge
No amount of public relations spin can repair the reputational hit from two deadly plane crashes. But Boeing may have further damaged itself with muddled communications that downplayed its responsibility in the disasters.
— The Jakarta Post

How Can Indonesia Manage Its Concerns About BRI Investments?
Jakarta may welcome, and need, Chinese investment; but it needs to mitigate the risks.
— The Diplomat (paywall)

Jokowi ponders two ‘hills’ in Kalimantan for new capital
All eyes are now on Kalimantan as President Joko “Jokowi” Widodo has fallen in love with two hills there – Bukit Soeharto (Soeharto Hill) and Gunung Mas (Golden Hill) – as he seeks the best place to relocate the capital from Jakarta.
— The Jakarta Post

Grab launches Indonesia’s first e-scooter sharing service, GrabWheels, available in BSD City
E-scooter rental services have been blowing up in cities around the world and now they’ve finally arrived in Indonesia with the launch of the country’s first sharing service for e-scooters (of the kick scooter variety, not to be confused with e-bikes).
— Coconuts

Indonesia War on Illegal Fishing in the Headlines with New Sinkings
The development highlighted the country’s ongoing campaign against illegal fishing under the Jokowi government.
— The Diplomat (paywall)

App-based ‘ojek’ orders decline in five cities after fare hike
Homegrown ride-hailing application Go-Jek has said the number of orders for ojek (motorcycle taxis) has dropped in five cities following the increase in fares on May 1.
— The Jakarta Post

Istiqlal shares thousands of free ‘iftar’ meals everyday
Every Ramadan, Istiqlal Mosque in Pasar Baru, Central Jakarta, prepares thousands of servings of food to be shared with Muslims to break the fast. This year is no exception.
— The Jakarta Post

Three held over drug trafficking from US to Indonesia
Authorities in Indonesia have arrested three people on suspicion of smuggling narcotics from the United States.
— Asia Times

Pompeo puts off Greenland stop in second cancellation in week
US Secretary of State Mike Pompeo on Thursday put off a visit to Greenland, citing pressing business in Washington — just two days after he also ditched a trip to Germany to fly to Iraq amid soaring tensions with Iran.
— The Jakarta Post