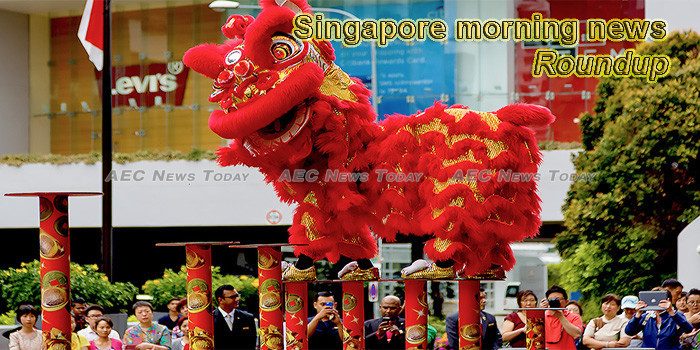 Milestone: MAN celebrates handing over its 1,000th bus in Singapore
MAN Truck & Bus has delivered 1,300 chassis for city buses to Singapore over the last eight years. In late October 2018, the 1,000th vehicle was symbolically handed over to its new owners. A remarkable success story.
— Automotive World

A look into the Singaporean ‘quickie’ problem
On February 3, 2019 (Sunday), the CEO and founder of a Singapore-based company called Simply Safety uploaded a post on Facebook that addressed a problem of Singaporeans.
— The Independent

The Cross Island Line: Testing Singapore’s green ambitions
Singapore’s eighth Mass Rapid Transit (MRT) line is set to be its most ambitious one yet. When completed in 2030, the 50km Cross Island Line (CRL) will be the city state’s longest fully underground line.
— Asean Today

Economy will ‘continue to grow’ this year, challenges ahead: PM Lee in Chinese New Year visit to SATS
With economies around the world slowing down due to the ongoing trade spat between the United States and China, Prime Minister Lee Hsien Loong said Singapore and the region would be affected.
— Channel NewsAsia (very annoying popups)

Alibaba firm to provide skills upgrading to over a thousand Singaporean employees
Alibaba Cloud has recently inked a deal with the Singapore Management University (SMU) to further develop the skills of over 1,000 Singaporean workers by enrolling in different relevant courses.
— The Independent

SINGAPORE – RANDSTAD: MAJORITY OF WORKFORCE OPTIMISTIC ABOUT DIGITALISATION
Approximately 80% of Singapore-based employees are positive that digital technology presents them with new opportunities, according to the latest Workmonitor by Randstad.
— Staffing Industry Analyst

Multiracial CNY celebrations true to Singapore spirit: President Halimah
It is that time of the year for Chinese families to strengthen ties, and in multiracial Singapore, it is also an opportunity for other races to enjoy the warmth and hospitality of their Chinese friends and neighbours.
— Strait Times

Best picnic places in Singapore: 7 scenic outdoor spots where you can chill with nature
A typical day in Singapore may be hot and humid, but don’t let that stop you from finding your idyllic spot under a leafy tree for a weekend of breezy fun. In other words, if you’re planning for a picnic, make it a scenic one.
— Asia One

Court volunteers donate $15K of household gifts to seniors’ charity this Lunar New Year
The Care Community Services Society (CCSS), particularly the elderly group, has something to be grateful for this Lunar New Year.
— The Independent

SINGAPORE EMBRACES AI WITH OPEN SOURCE LIBRARIES AND TALENT DEVELOPMENT
THE economy of Singapore thrives on the back of the nation’s efficient services industry, especially since the industry makes up 72% of the country’s gross domestic product and 74% of national employment.
— Digital News Asia

JSA EP13: Sembawang is named after a tree
In Singapore, many of the street names have their own interesting stories. For instance, “Sembawang” is actually named after the Sembawang tree.
— Asia One

The Future of Singapore’s Politics in Focus Amid Election Speculation
Last month, a former member of Singapore’s ruling People’s Action Party (PAP), which has governed the city-state since its independence, announced that he would be forming a new political party.
— The Diplomat

Homes for fire victims
The launch of five blocks of flats in 1961, containing 904 one-room, semi-communal units, all of which were occupied by Bukit Ho Swee fire victims. The rent was $20 a month.
— Strait Times

Singaporeans roast netizen claiming knitting is dangerous on the bus
So maybe there’s something to the ‘snowflake’ label after all? One netizen posted about seeing a woman ‘knitting’ on a bus, and called it ‘quite dangerous.
— The Independent

New portal this year to make it easier for students seeking internships in China
An internship programme to support Singapore students pursuing opportunities in China will be implemented this year.
— Straits Times

LTA summons Go-Jek driver who went viral for taking passenger ‘hostage’
Kamaruzzaman Abdul Latiff, a driver for ride-hailing service Go-Jek, posted a 7-minute video, now gone viral, of himself with a woman who accused him of taking her hostage when what he was doing was taking her to a police station to settle a dispute between them.
— The Independent

50 people in S’pore pool together S$2,310 to buy essential items for children’s home
They just pooled their resources and did it.
— Mothership

Huawei and the 5G revolution: Diversity is the name of the game in Singapore
5G will soon be launched in Singapore, elsewhere in Asia and beyond, promising a revolution in connectivity speeds, new entertainment options and new applications, such as driverless cars.
— Strait Times

In pictures: Ringing in the Year of the Pig in Chinatown
Visitors in Chinatown were treated to a spectacle of street lights, the lingering smell of traditional delicacies and a splendid fireworks display on Monday (Feb 4).
— Channel NewsAsia (very annoying popups)

2 Singapore Shares That Might Give Investors Big Ang Paos For The Pig Year
Here are two companies that might offer good investment return in the Pig year.
— The Motley Fool